The Alt-Right Is Killing People

Above Photo: From splcenter.org

The Southern Poverty Law Center (SPLC) counted over 100 people killed or injured by alleged perpetrators influenced by the so-called “alt-right” — a movement that continues to access the mainstream and reach young recruits.

On December 7, 2017, a 21-year-old white male posing as a student entered Aztec High School in rural New Mexico and began firing a handgun, killing two students before taking his own life.

At the time, the news of the shooting went largely ignored, but the online activity of the alleged killer, William Edward Atchison, bore all the hallmarks of the “alt-right”—the now infamous subculture and political movement consisting of vicious trolls, racist activists, and bitter misogynists.

But Atchison wasn’t the first to fit the profile of alt-right killer—that morbid milestone belongs to Elliot Rodger, the 22-year-old who in 2014 killed seven in Isla Vista, California, after uploading a sprawling manifesto filled with hatred of young women and interracial couples (Atchison went by “Elliot Rodger” in one of his many online personas and lauded the “supreme gentleman,” a title Rodger gave himself and has since become a meme on the alt-right).

Including Rodger’s murderous rampage there have been at least 13 alt-right related fatal episodes, leaving 43 dead and more than 60 injured (see list). Nine of the 12 incidents counted here occurred in 2017 alone, making last year the most violent year for the movement. 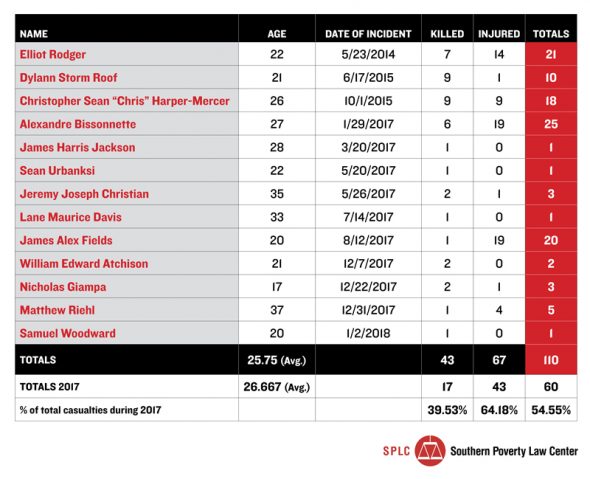 Like Atchison and Rodger, these perpetrators were all male and, with the exception of three men, all under the age of 30 at the time they are alleged to have killed. The average age of the alt-right killers is 26. The youngest was 17. One, Alexandre Bissonnette, is Canadian, but the rest are American. While some certainly displayed signs of mental illness, all share a history of consuming and/or participating in the type of far-right ecosystem that defines the alt-right.

The “alternative right” was coined in part by white nationalist leader Richard Bertrand Spencer in 2008, but the movement as it’s known today can largely be traced back to 2012 and 2013 when two major events occurred: the killing of the black teenager Trayvon Martin and the so-called Gamergate controversy where female game developers and journalists were systematically threatened with rape and death. Both were formative moments for a young generation of far-right activists raised on the internet and who found community on chaotic forums like 4chan and Reddit where the classic tenets of white nationalism — most notably the belief that white identity is under attack by multiculturalism and political correctness — flourish under dizzying layers of toxic irony.

Significantly, Gamergate also launched the career of Milo Yiannopolous who later used his perch at Breitbart News to whitewash the movement and push it further into the mainstream (former senior adviser to President Donald Trump and Breitbart executive editor Stephen Bannon infamously called the site “the platform for the alt-right.”).

Today, the audience available to alt-right propaganda remains “phenomenally larger” than that available to ISIS-type recruiters, according to MoonshotCVE, a London-based group that counters online radicalization. This accessibility makes it easy for gradual indoctrination, particularly on social media platforms where tech companies long ignored the warning signs that their platforms were contributing to the radicalization of far-right extremists. That so much violence has taken on the shades of a specific subculture like the alt-right quickly shows just how critical these wide-open platforms have been to the growth of the movement.

But the dark engine of the movement is reactionary white male resentment. Alt-right propaganda is designed to nourish the precise grievances recited by the disillusioned and indignant young men that dominate its ranks. It provides a coherent—but malicious—worldview. For a recruit, the alt-right helps explain why they don’t have the jobs or the sexual partners or the overall societal and cultural respect that they believe (and are told) to be rightfully theirs. This appeal is resonating at a moment in the United States when economic inequality is worsening and a majority-minority United States is forecasted for 2044—developments exploited by racist propagandists. As a writer on Spencer’s AltRight.com wrote this past December:

And all of modern society seems to offer literally nothing to young White men. It’s as if society doesn’t want them to tune in, show up and have a stake in the future of that institution.

As a result, new institutions step up to pick up the slack.

PUA [Pick Up Artists] meet-ups help them learn the skills to get girls. In the place of a gentleman’s club, or underground boxing ring, or boy scouts-type activity, the Alt-Right has stepped up to give camaraderie and a sense of purpose. The internet gives them their entertainment and a place to intellectually grow.

As all the old institutions die, new ones rise to meet the demand and fill the vacuum. Till the perks come back, young White men are going to keep tuning out of society, cast adrift by previous generations that just don’t give a damn.

The lucky ones will wash up on our shores. The unlucky ones…well.

The violence that left one dead at the Unite the Right rally in Charlottesville, Virginia, last summer should not be understood as the high-water mark for the movement as some analysts have argued. The alt-right worldview, this rebranding of old hatreds, will remain compelling to disaffected white males and those who claim to speak for them for the foreseeable future. Worse, as this study suggests, punctuated violence will continue. For the same vision of society that the alt-right promulgates—its externalization of blame that lands on a host of enemies seen to be in the ascendancy—also aligns with the indicators of mass violence.

Meanwhile, the alt-right is redoubling its efforts at youth recruitment, intensifying its rhetoric and calling for radical, individual action.