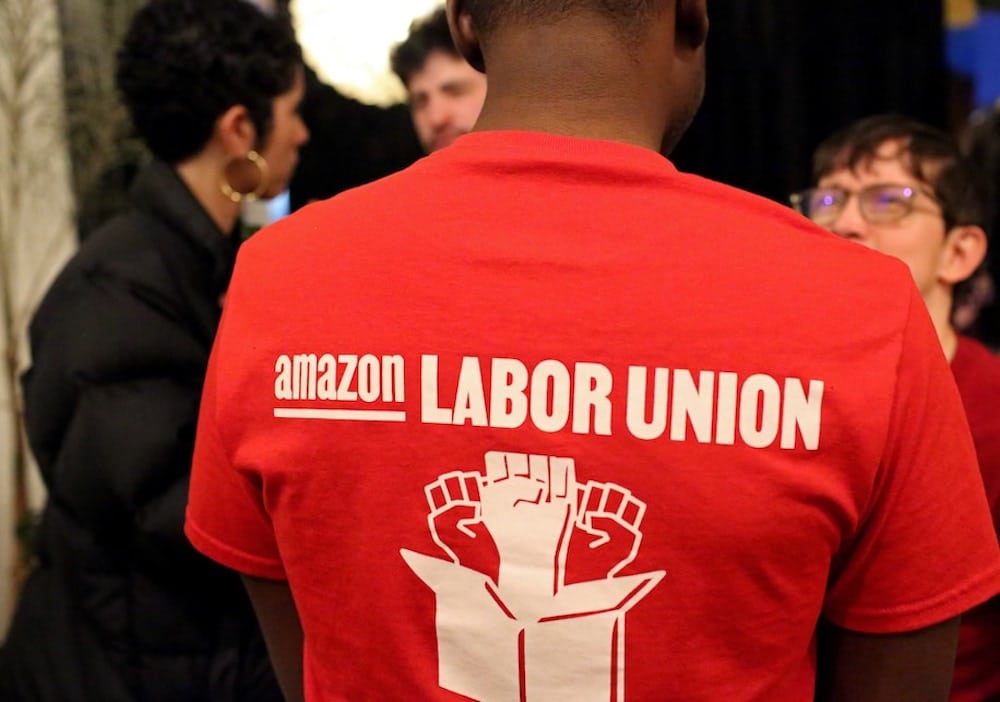 The Amazon Labor Union Is A Problem For Democrats

So They’re Trying To Co-Opt It.

The Democrats are fighting hard to co-opt the radically independent Amazon Labor Union. But organizing with Democrats is a dead end; the way forward is through workers organizing across sectors, independent from capitalist parties and politicians.

The Amazon Labor Union’s (ALU) victory is shaking the country. After unionizing a warehouse for one of the world’s biggest companies, the ALU is being flooded with messages from other workers, from Amazon workers and beyond, asking for help to organize their workplaces.

This win is part of a new upsurge in union struggle in the U.S. tied to the rise of “Generation U” — “U” for “Union.” This generation of precarious, multiracial workers is posing a collective fight against the various oppressions that capitalism sustains to divide workers. Amazon’s victory also comes in a context of unionization rates at a ten-year high, and the highest public support for unions since 1965. The bosses at Starbucks — which fought ferociously to keep out unions for decades — are now witnessing their own unionization wave.

During ALU’s unionization drive, the Democrats were nowhere to be seen. After all, the union doesn’t fit the standard, staid, safe model of bureaucratic unions. Now that the ALU has won, the Democrats are desperate to channel the movement into support for a party for millionaire capitalists — a party that receives millions from Amazon itself.

The ALU: A “Problem” Democrats Want To “Solve”

The ALU is a problem for Democrats.

It’s a threat to Amazon’s profits, and the Democrats are key allies to Amazon. In 2020, the company donated ten million dollars to the Democratic Party, helping get Biden elected. The White House is also a stepping stone for better-paying corporate jobs, like those at Amazon. Jay Carney, President Obama’s press secretary, went on to be Amazon’s senior vice president for global affairs. His paycheck, in other words, comes from the exploitation of workers in Amazon warehouses, trucks, delivery vans, etc.

The Democrats present themselves as supporting workers organizing, but are really desperate to snare the energy of the Amazon movement for themselves. This is a calculated move. The more the Amazon labor movement “plays ball” — the more it focuses on asking politely instead of striking — the less it will hurt Amazon’s profits.

But the Democrats are desperate for another reason, too. Biden has basically done nothing for labor since he came to office, and yet he ran as the “union president.” With elections coming in 2022 and 2024, the Democrats need to look like they are on the side of unions. When they say they support the ALU, it’s a public relations ploy.

But the wheels of  co-optation are moving — and they’re moving fast.

What exactly do the Democrats want from the ALU — what does “ co-opting” look like, whether it’s conscious or not on the part of Bernie, AOC and others?  First, the Democrats want to appear with the ALU because they want to look pro-labor — though they’ve done little to nothing for labor for decades. The ALU is good for the party’s image.

Second, the biggest “win” the Democrats want is to convince unions like the ALU to work through them — and avoid more radical actions. For example, since the 1930s at least, the Democrats’ aim has been a labor movement that “stays in the lines” of restrictive labor law — and one that avoids the roiling, disruptive, costly strikes that would cripple the economy and win big for the working class.  It doesn’t matter if Bernie and AOC talk a big game, or even if they think they’re really pro-labor. They’re part of a system — the Democratic Party — that has been poison for the labor movement.

At first, the Democrats didn’t want to be seen near the ALU, the more radical, less bureaucratically “managed” union. Firstly, because it wasn’t clear it would win; second, because it’s unpredictable.

It’s no secret that Representative Alexandria Ocasio-Cortez (AOC) refused to come to the Staten Island warehouse to show her support. ALU interim president Chris Smalls has been very vocal in his criticism. AOC gave the lame excuse that it’s outside her district. Now, however, the Democrats can’t wait to be seen near the ALU — even AOC now plans to visit the warehouse this Sunday

The person leading the  co-optation is Senator Bernie Sanders. He joined a call with ALU organizers, set up by Jacobin, to applaud them. He’s celebrating their win, and is also visiting Staten Island this weekend for a conference with the ALU.

But recent history should show just how dangerous this move from Sanders really is. In 2020, the U.S. was rocked by the BLM uprising against police violence, the biggest social movement in the country’s history. Running for president as a Democrat, Sanders looked like an independent, more radical option, and played a crucial, devastating role in demobilizing the movement. He sucked up support from the Democratic Socialists of America (DSA) and many of the radicalized youth in the streets.

Then Bernie turned around and supported Joe Biden — a candidate who openly opposes every one of the aims of the BLM uprising, including defunding the police — nevermind abolishing them. In fact, now that Biden is in office, he is a champion of the police and of increasing police and military budgets.

In other words, Bernie served as co-opter-in-chief — channeling the radical energy of a popular movement toward the Democratic machine that opposed the movement. The same thing is happening now, whether he knows it or not.

But it’s not just Bernie. Once it was clear the ALU won, Biden finally started talking about the Staten Island warehouse: “Amazon, here we come.”

Jacobin — a major DSA-aligned publication — is playing its part, and is scrambling to be the link between the ALU and Bernie and the Democrats. By hosting the aforementioned event, and by banging the drum for the ALU and supporting the Democrats, their hope is that the ALU can boost the electoral chances of their capitalist party of choice. Jacobin’s hope is that the Democratic Party — which represents the millionaires and billionaires, corporations, and the military — can be convinced to protect the working class. But the last few years show exactly the opposite.

The labor leaders are fighting to bring the ALU into the fold, too.

Take, for example, the head of the AFL-CIO, Liz Shuler. She represents the old guard of the union leadership — the kind that abandons strikes and focuses on lobbying Democrats. Talking to the New York Times, she celebrated the ALU. But her main advice is to use the AFL-CIO’s own — and constantly failed — strategy: supporting Democrats.

The same is true of the more progressive wing of the union movement, whose main spokesperson is Jane McAlevey. She is a professional organizer who worked for years helping lead campaigns in the SEIU and the AFL-CIO. She’s been critical of the AFL-CIO and SEIU union leaders’ passive strategy, and says only more strikes, and a more militant workers’ movement, can make workers’ lives better, which sounds great.

But McAlevey is teaming up with the more traditional labor leaders on one key point: the goal is to support the Democratic Party, she says. In other words, both wings of the labor movement — traditional and more progressive — are trying to snag the Amazon movement for the Democrats.

A Working Class Fighting Under Its Own Banner, With Its Own Weapons

It’s undoubtedly a good idea for the ALU to publicize their win against Amazon and their method to build widespread support and the power of the labor movement. But helping the Democrats in any way, making them part of a strategy for labor power — all of this would rob the Amazon labor movement of its power. The ALU has power because it can shut down Amazon factories — because it can strike and stop the flow of profits. Being an ally to Democrats is a dead end for workers.

The lesson is clear: the future of the Amazon labor movement depends on NOT allying with the Democratic Party — it rests on being radically politically independent.

The ALU chose to organize independently from preexisting labor bureaucracies for a reason. The big bureaucracies hamstring their own members in fighting in all the ways they need to to win. However, we should also recognize that those limits of the bureaucracy, which the ALU is trying to avoid, can’t be separated from the Democratic Party. That party has shown again and again it does not bolster or grow movements, but is a graveyard of movements, protecting the ruling class and the capitalist system.”

History has shown us that closer connections to the Democratic Party, whether through the bureaucracies of big unions or directly through party politicians, is a dead end for workers. The ALU has already started taking some steps to connect with a more powerful force than any capitalist party or politician: other members and sectors of the working class. For example, Amazon and Starbucks workers recently made a joint call to mobilize against union busting on May Day. These collaborations, where workers organize independently across sectors, are what can lead to real wins for the working class.