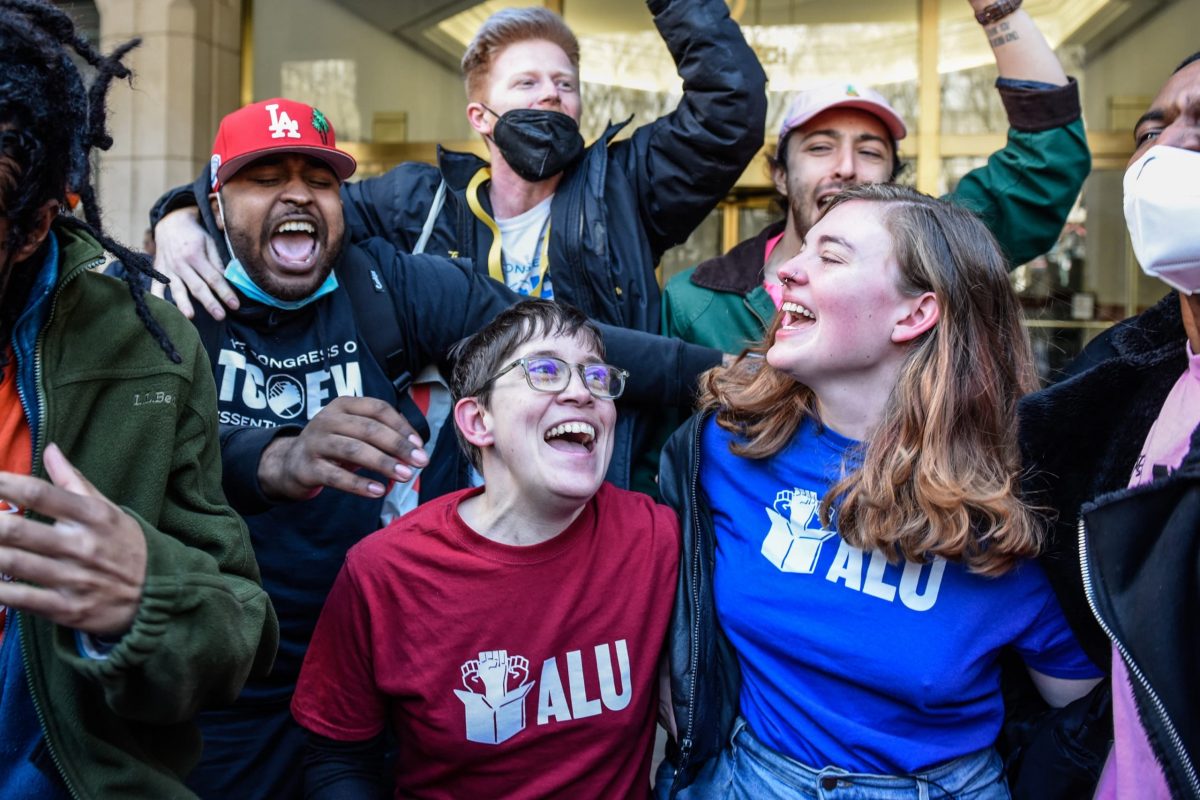 The Amazon Labor Union Victory – Lessons For All Of Labor

Above photo: Amazon labor organizers and supporters celebrate outside the National Labor Relations Board offices in the Brooklyn borough of New York, on Friday, April 1, 2022. Stephanie Keith | Bloomberg | Getty Images.

In one of the most remarkable labor organizing victories in decades, the Amazon workers in Staten Island voted to unionize with the independent Amazon Labor Union (ALU). This is the first organizing victory for any union at any of Amazon’s 110 warehouses across the USA, the nation’s second largest employer with over a million employees.

This was a real bottom-up organizing effort potentially highlighting an effective way forward for the rest of labor – a victory that gives momentum to workers not only in the other Amazon warehouses but in all industries. It demonstrates how and why rank and file workers are the essential elements of not only a successful organizing drive but critical to a revitalized labor movement based on struggle.

In a remarkable moment of candor, the Financial Times, which always speaks for big business, admits Amazon workers took great inspiration from none other than legendary communist William Z. Foster.

Amazon’s warehouse in Staten Island is a thoroughly 21st-century workplace where human “pickers” select items from shelves brought to them by a fleet of robots. Yet when the leaders of the newly formed Amazon Labor Union wanted to unionize the place, they turned to a manual called ‘Organizing Methods in the Steel Industry’ from 1936. The pamphlet recommends among other things a “chain system” whereby workers recruit other workers.

That Amazon workers should look back to the history of the steel industry is not as strange as it might sound. Steel was a vital sector of the American economy a century ago, as is ecommerce today.”

While written in the 1930’s, the short but informative pamphlet illustrated and combined the necessary ideological foundation, strategic outlook and practical tasks needed to take on the biggest Steel corporations and win. And it remains relevant today.

Unfortunately the strategy and victory for the ALU is an exception to the norm in today’s labor movement. A combination of red baiting, deindustrialization, and lack of desire to actually fight has seen the broader labor movement completely abandon any semblance of class struggle for class collaboration since Foster’s time.

Not only have traditional unions been largely unable to organize large militant units like the ALU just did in Staten Island, but the same losing class-collaborationist approach was most apparent when unions were unable to protect workers who were already organized. In the late 1970’s and onward, the deindustrialization of the USA was in full swing. Steel, coal, auto, rubber, transportation were just a few of the basic industries that were offshored, downsized or disinvested by capital. Hundreds of thousands lost their jobs, communities were devastated, as infrastructure and public services took a major blow.

The causes of this man-made disaster were pictured and portrayed by politicians, business, the media, and labor as inevitable results of living under the magic of the capitalist market. The mayor of Pittsburgh, Richard Caliguiri remarked that workers should leave the city for greener pastures, essentially defending the bosses’ shut down of the steel mills in western Pennsylvania. Rather than use their existing political and organizational muscle to mobilize the tens of thousands into a grand coalition to put up a fight, unions simply folded into a charity-based approach, reducing their credibility and giving credence to the bosses’ arguments that the unions caused the offshoring because they “asked for too much”. Given that all these industries were unionized yet collapsed without a mass struggle is crucial for workers today.

Labor’s efforts today, with the exception of a few unions in particular sectors, largely mirror this defeatist approach.Tied to the bosses and the twin corrupt mainstream political parties, labor’s efforts are reduced to lobbying, email campaigns, media releases, and excessive legalistic strategies. For years, rather than attempt to unionize many low-wage sectors, labor lobbied for a federal minimum wage bill, something still yet to come to fruition.

This is what makes the Amazon victory so exciting, and one can see the incredible relevance today that is exhibited by the Foster pamphlet used to organize the Steel Industry decades ago. The parallels for the labor movement today and in the late 1920’s and early 1930’s are remarkable:

The organization campaign must be a fighting movement. It must realize that if the steel workers are to be organized they can only rely upon themselves and the support they get from other workers. While every advantage should be taken of all political institutions and individuals to defend the steel workers’ civil rights and to advance their interests generally, it would be the worst folly to rely upon Roosevelt, Earle or other capitalist politicians to adopt measures to organize the steel workers. There is every probability that only through a great strike can the steel workers establish their union and secure their demands, and this perspective must be constantly borne in mind.

Although the steel workers must not place their faith in capitalist politicians, they should utilize every means to develop working class political activity and organization in the steel areas. Especially there should be organized local Labor parties in the steel towns and thus foundations laid for an eventual Farmer-Labor Party.

Christian Smalls, leader of the ALU, in an interview on Fox News commented on being ignored by politicians in the runup to the NLRB election, “Whether they showed up or not, they didn’t make or break our election. We just had to continue to organize.” Like Foster, Smalls is setting an example  in which unions chart an independent course, focusing on confidence and mass support of the rank and file over tacit support from politicians – worrying about whether AOC or Bernie Sanders attends a photo op rally is not a priority.

Democracy Defined as Rank and File Control and Involvement

For both Foster and now the ALU, mass participation among the rank and file and a captivating positive attitude among the organizing committee were crucial.

“The necessary discipline cannot be attained by issuing drastic orders, but must be based upon wide education work among the rank and file and the development of confidence among them in the cause and ultimate victory of the movement.”

‘A central aim must always be to draw the largest possible masses into direct participation in all the vital activities of the union; membership recruitment, formulation of demands, union elections, petitions, pledge votes, strike votes, strike organization, etc. This gives them a feeling that the union is actually their movement.”

This critical strategy to draw in the workers to participate in the drive was necessary to destroy management’s attempt to picture the union organizers as “outsiders” that can confuse employees and reduce the union‘s credibility. Unfortunately, Amazon was successful in defeating the first Alabama organizing drive by the RWDSU by constantly highlighting the out-of-town supporters who would pass flyers or visit workers instead of rank-and-file workers at the sites. Solidarity support and professional staff are critical but only work when following a worker-led movement.

What Kind of Union Do Workers Need Today?

Can we learn from our past mistakes? Unions are essential for protecting the workers on the job and that’s why the capitalist class is relentless in opposition to workers organizing. But the Amazon Labor Union model can not exist in a vacuum. Its approach is a guide and for the working class to move to the offensive its principles must be extended far and wide.

The ALU and other new leaders in labor must shift the broader labor movement away from the strategy of class collaboration in order to be strong enough to withstand the ongoing attacks by capital. Workers can only actually go on the offensive once campaigns are moved beyond individual bargaining units to a class-level fight.

The ALU has shown the working class in simple and practical terms that it’s more important to build bottom-up solidarity among all workers than building an identity with your boss. This is something we should understand and help to nurture and grow.

Ed Grystar has more than 40 years experience in the labor and healthcare justice movements. Served as the President of the Butler County (PA) United Labor Council for 15 years. Has decades of experience organizing and negotiating labor contracts with the Service Employees International Union and the Pennsylvania Association of Staff Nurses & Allied Professionals.