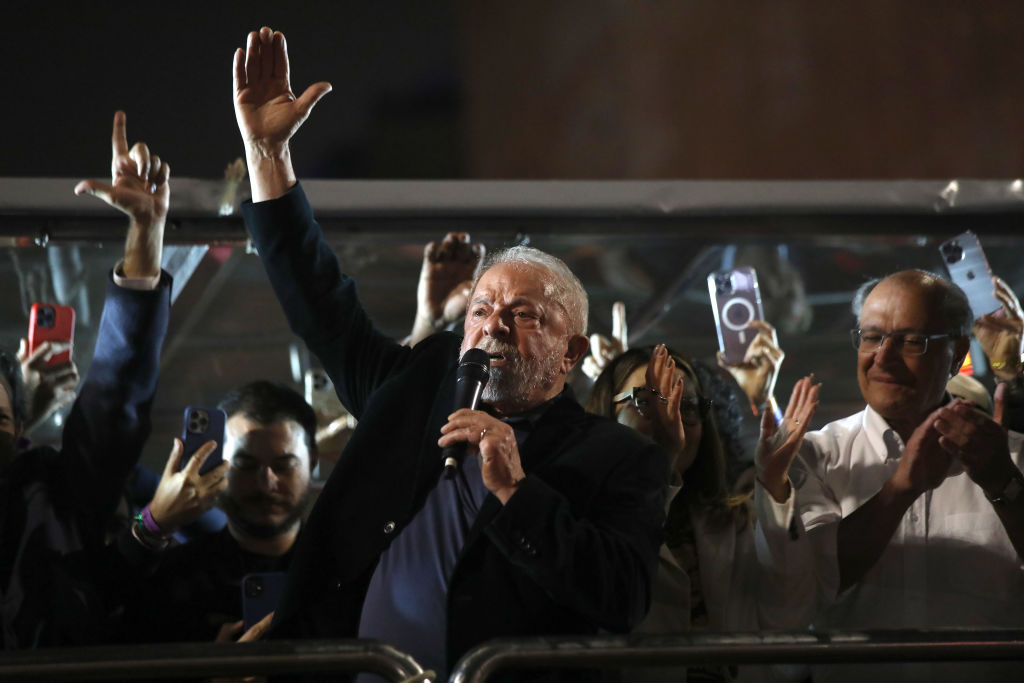 In the first round of Brazil’s presidential elections, Lula triumphed.

But the threat of a Bolsonaro victory to the world is clear – and must be passionately fought in the upcoming run-off.

Brazil went to the polls yesterday under unusual political circumstances: Lula, the Workers’ Party (PT) candidate and champion of the poor, confronted an extreme right-winger, racist, misogynist, homophobic, and pro-dictatorship ex-army captain Jair Bolsonaro. Lula won the first round with 48.42% of the vote and looks set to win in the second round. But Bolsonaro, defying polls’ predictions, performed better than expected, scoring 43.2%.

The background is important here. Brazil’s elite managed both to impeach PT president Dilma Rousseff in 2016 on false charges of fiscal improprieties (now fully exonerated) and to jail former president Lula, thus eliminating him from the 2018 presidential race. This emboldened Brazil’s establishment, who turned these successes into a push to ostracise the PT. In many places PT supporters were physically attacked. Bolsonaro’s supporters and extreme right-wing organisations went on the rampage.

In the process, traditional conservative parties got greatly discredited. The PSDB, a party that used to obtain between 54 and 38% of the vote, threw its lot behind Brazil Democratic Movement’s candidate, Simone Tebet, who trailed in the polls with 3-5%.

The elite as a whole (parties, leaders, institutions, media, and so forth) not only enthusiastically joined in the anti-PT crusade, but backed Bolsonaro’s candidacy with gusto. Thus Bolsonaro shocked Brazil by winning the 2018 presidential election with a hefty 55% against PT candidate Fernando Haddad with 42% (the lowest PT score since 2002). Bolsonaro’s handsome 2018 victory came on the back of a national and international political and media campaign that, using the Lava Jato corruption investigation into Petrobras (Brazil’s state oil company), targeted the PT, especially Lula.

Though there was plenty of coverage about Bolsonaro’s extreme views (he was labelled the ‘Trump of the Tropics’, as somebody making ‘controversial comments’ about race, women, homosexuality, guns, democracy, etc.), the mainstream media would invariably ‘balance’ criticism of Bolsonaro with references to the Lava Jato investigation leading to Lula’s imprisonment (even though they knew the investigation and trial had failed to prove his guilt).

But people had to live with the reality of Bolsonaro’s rule: his crass and brash style, his sheer incompetence managing government, his and his family’s involvement in corruption scandals, the drastic decline of the economy, the brutal austerity applied and the concomitant rise in poverty and unemployment, and, in particular, with his criminal handling of the Covid-19 pandemic.

By October 2021, the total number of deaths by Covid-19 had surpassed 600,000. Bolsonaro openly discouraged people from getting vaccinated and wearing masks. By November 2021 his rate of approval had crashed to less than 20%. By September 2022, reportedly, 33 million Brazilians were going hungry in a country where PT governments had taken about 40 million people out of poverty.

To make matters worse, Bolsonaro incited violence, resulting in several PT supporters being murdered by bolsonaristas. He also reduced controls on obtaining weapons, resulting in the massive bulk-buying of firearms. It is estimated that since 2018, the number of ‘legal’ guns in private hands has doubled to two million.

Bolsonaro’s popularity had begun to decline steadily as early as 2019 (in April that year it was 32%), and as the 2022 election approached, he resorted to a campaign of threats, repeatedly hinting he would not recognise the results, and even threatening to suspend the election.

Time eloquently reported on the wave of violence Bolsonaro incited:

Since [the violence was unleashed], attacks among political supporters have escalated, with several reports of beatings, assaults, stabbings and even murders. Last week, a 39-year-old man was stabbed to death at a bar in the northeastern state of Ceará after declaring his support for Lula […] A lawmaker belonging to da Silva’s Workers Party, Paulo Guedes, posted on social media that his car had been shot at three times by Bolsonaro supporters during a rally on Sept. 25.

PT supporters showed discipline and did not respond to the bolsonarista provocations. Then Bolsonaro went for a campaign to discredit Brazil’s electronic electoral system, the same one that recognised his victory in 2018.

In July, in an extraordinary act, Bolsonaro invited the diplomatic corps to his presidential residence to ‘brief’ them about Brazil’s electoral system being open to fraud. He falsely asserted that the system was vulnerable, but without evidence, and the electoral authorities debunked his claims repeatedly. Brazil’s electronic voting system has been in place since 1996 with no evidence of irregularities. The Supreme Electoral Council (TSE) unanimously condemned Bolsonaro’s meeting with the diplomats and slapped him with a fine of 20,000 Reals (about US$3,700).

The country’s election ombudsman, Benedito Gonçalves, also rebuked the Liberal Party for evading responsibility for a false report that challenged Brazil’s electoral integrity, which he said was produced and disclosed with the participation of the party leadership. Since May, Bolsonaro had said that the Liberal Party would seek to audit the electronic voting system as part of laying out the groundwork to contest the election results should he lose.

He claimed the polls pointing to a Lula victory were fake news, and on Election Day itself, after casting his vote, again sowed doubts about the election. Despite overwhelming evidence of the falsehood of Bolsonaro’s claims about the electoral system being prone to fraud, and the many public statements by the TSE and other authorities about it, such allegations continue to be spread in the bolsonarista social media.

In the last TV presidential debate on 29 September, Bolsonaro refused to answer a question from Soraya Thronickle (another presidential candidate) on whether if, since he claimed the election was barely clean, he had any intention to carry out a coup d’état.

Thus, Lula’s running mate, Geraldo Alckim, represents something broader than the former president’s well-known political dexterity. I have already mentioned the hardening of the TSE’s attitude towards Bolsonaro’s repeated transgressions of electoral norms. The Supreme Court also previously quashed all charges and convictions against Lula, thereby making it possible for him to be presidential candidate, while Sergio Moro, Lula’s ferocious judge/prosecutor, is being investigated, and his home searched over breaches of electoral norms. The TSE also ordered the exclusion of videos Moro had published on YouTube for being in breach of electoral rules.

More significantly, the army issued a statement a few days ago declaring that it is a national institution conscious of its constitutional mission, clearing out bolsonarista rumours that it shared doubts about the electoral system. On election day, TSE president Alexandre Moraes dismissed any idea the armed forces would do their own independent counting of the votes. ‘The armed forces will have exactly the same [electoral] data as everyone else,’ he said. ‘No more, no less.’ The TSE also barred Bolsonaro from using his UN speech in his electoral campaign ads.

The change in the establishment’s attitude to Bolsonaro can be seen in the anti-Bolsonaro stance of the Brazilian media: Folha de Sao Paulo, Rede Globo, Estadão de Sao Paulo, and Rede Globo have all denounced Bolsonaro’s anti-democratic utterances and have had spats with him. The recent issue of Veja, an intensely conservative magazine, ran a front page featuring Bolsonaro’s face and the caption ‘The Bolsonaro Threat’.

Also significant has been the stance of key mainstream media outlets outside Brazil. Headlines such as ‘Jair Bolsonaro, ‘Tropical Trump,’ takes democracy to the brink’, ‘Bolsonaro’s obsessive gun policy endangers all Brazil’ (in the Washington Post); ‘Bolsonaro might be beaten, and it feels too good to be true’ (in the New York Times); ‘Win or lose, Jair Bolsonaro poses a threat to Brazilian democracy’ (in the Economist); and ‘‘Bolsonaro promotes hatred’: violence stalks run-up to crucial Brazil election’ (in the Guardian) all point to Bolsonaro as a serious menace to democracy, but also to the Amazon, most of them suggesting that the rainforest’s fate rests on the election of Lula. For once, the mainstream media seem to have got it right.

The Results So Far

How has all this affected the results? Though there was a strong expectation, confirmed by most polls, that Lula would win in the first round, it was not to be. Historically the PT has emerged victorious only in the second round, as happened in 2002, 2006, 2010, and 2014. Another common feature of PT presidential victories in those years was the inability of the party to win parliamentary majorities. That notwithstanding, in this election bolsonarismo has performed relatively better and the PT worse than in normal elections. (A more detailed analysis of the elections of deputies, senators, and governors would require a full article in itself, which can be better gauged after the second round.)

The rise of the phenomenon of Bolsonaro—until more recently aided and abetted by Brazil’s elite and its international allies, with the vigorous and assiduous help of the world mainstream media—generated a monstrosity that has acquired a life of its own. Due to years of persistent media and political demonisation of the party and its main leaders, especially Lula and Dilma, there is little doubt that a section of the working class has been alienated from supporting the PT. Bolsonaro took the demonisation to its extreme conclusion: the PT is not a rival to defeat, but a dangerous enemy to be exterminated.

Bolsonaro’s anti-PT campaign resulted, among other things, in influential politicians and evangelical pastors bombarding their constituents with warnings that if Lula won, he would close Christian churches. Lula was also depicted as favouring Afro Brazilian religions, playing on existing racial prejudices. (Evangelicals make up about a third of Brazil’s population.)

After having fully stopped the PT’s Bolsa Familia poverty-eradication programme, Bolsonaro launched the Auxílio Brasil programme, giving 600 Reals monthly and claiming to reach 20 million families. Lula’s criticism of Auxílio Brazil’s limitations as compared to his Bolsa Familia led to an immediate smear campaign claiming that he would stop it, with attendant negative electoral consequences for the PT.

Add to that the aggressive campaign of violence against PT individuals and PT rallies, Bolsonaro’s hate speeches especially against feminism, women, the LGBT community, and liberal values, and his hard line on crime—through which he has encouraged the middle class to purchase guns—all delivered in an intensely socially conservative country, and this goes some way to explain bolsonarismo’s continuing electoral strength.

Simone Tebet, MDB presidential candidate (with nearly 4% of the vote) has already declared her unambiguous support for Lula in the second round. Ciro Gomes, candidate of the PDT and hitherto a prominent national political figure of the centre left, who obtained barely 3% of the vote, has, however, equivocated on every issue the nation has faced in the last 4-6 years (in 2018 interview he said ‘Brazil cannot endure a leftist government’). He is unlikely to call to support Lula in the second round and likely to fade into total insignificance. The above means that the second round is anything but a foregone conclusion, though Lula has the edge.

Given their electoral performance, Bolsonaro and bolsonarismo remain a serious threat to Brazilian democracy that would probably be willing to resort to strong-arm tactics to get their way. Additionally, the ambivalence towards democracy by sections of the military top brass (Bolsonaro’s running mate is general Walter Braga Neto, who was Bolsonaro’s minister of defence and is not fond of democracy), and the reports that the 400,000 strong, trigger-happy military police are fond of Bolsonaro remain disturbing features of Brazilian politics.

In the face of such circumstances, the solidarity movement in the UK must remain vigilant and be ready to redouble our efforts in the eventuality of any bolsonarista threats. A Lula victory in the second round is nothing less than the precondition to preserve Brazil’s democracy.