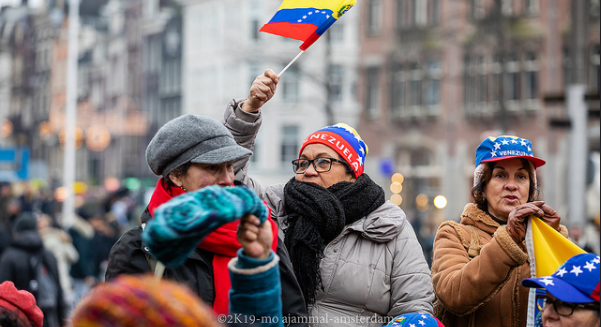 The Anatomy Of Imperialist Intervention

WHAT is happening in Venezuela today provides an object lesson on the nature of imperialist intervention in third world countries in the era of neoliberalism. Imperialism has of late intervened along similar lines in other Latin American countries, notably Brazil; but Venezuela, precisely because of the strong resistance it has put up, shows the techniques of imperialism in sharper relief.

Not long ago, the Leftward turn in Latin America, not just Cuba, Bolivia and Venezuela, but Brazil, Argentina, Ecuador and several other countries where Left-of-Centre regimes had come to power and pursed redistributive policies in favour of the working poor, had been a source of inspiration for progressive forces all over the world. Today, many of these regimes have been toppled, not because their programmes and policies have lost popular support, but through vile machinations in which the US has played a major role. They have been coups d’état of a new kind, different from the earlier ones effected by the US in the 50s, 60s, and 70s; they are specific to the era of neoliberalism.

There have been two important factors contributing towards this toppling. One is the collapse of the primary commodity terms of trade in the wake of the world capitalist crisis. Latin American countries, including even Brazil, have been heavy raw material exporters, and the adverse terms of trade movement has left them with reduced foreign exchange earnings for buying their essential imports. In the case of Venezuela, the reduced oil prices have played this role; in addition reduced oil prices have also reduced government revenues. The government’s attempt to preserve the redistributive benefits enjoyed by the poor in the face of such a decline in foreign exchange earnings, instead of its adopting “austerity” measures which is what imperialist agencies advocate, has caused a spurt of inflation.

This has undoubtedly meant hardships for the poor. But these hardships, one must note, have not been because of the policies; they have been caused by the decline in terms of trade. In fact the poor would have suffered far more in the event of a policy of “austerity” in the face of these difficulties, than they have through the non-imposition of such a policy of “austerity”.

The economic difficulties for Venezuela have been infinitely worsened because of the sanctions imposed by the US which prevent even essential commodities like life-saving drugs from being imported freely. And of late the US has further escalated its economic war against Venezuela by freezing the assets held by the Venezuelan State-owned oil company in the US, and announcing that all revenues from Venezuelan oil exports to the US will be given not to the democratically elected and constitutionally legitimate regime of President Nicholas Maduro, but to the regime of Juan Guiado, who, with US backing, has simply proclaimed himself as the president. This amounts literally to stealing Venezuela’s own money to stage a coup in Venezuela itself, a phenomenon reminiscent of the colonial era when the colonial people were plundered to finance colonial conquests.

Such stealing, and sanctions, needless to say, compound the misery of the people of Venezuela, and this very misery is then blamed on the Maduro government to turn people against it.

The second element that has contributed to the recent toppling game is the fact that the US is now gradually disengaging itself from direct involvement in the Middle East, without in anyway giving up its imperial pursuits there. And this now allows it to focus more on Latin America.

The recent US coup attempts, of which Venezuela is a classic example, differ from the US-sponsored coups of the 50s, 60s and 70s, in at least six obvious ways, and constitute an altogether new pattern.

The first is that while the earlier coups, whether in Iran or Guatemala, or Chile, had been against democratically-elected governments, and had unashamedly installed in their place US-backed authoritarian regimes, the current coups, though also directed against democratically-elected governments, are carried out in the name of democracy. In Brazil, Bolsonaro appears  as a democratically-elected president; but not only was there a “parliamentary coup” against Dilma Rousseff, but the political leader acknowledged to be the most popular one in the country, namely ex-president Lula of the Workers’ Party, was not allowed to contest the presidential elections.

Likewise in Venezuela, Juan Guaido, the US-backed pretender happens to be the president of the national assembly, and not just some military strongman. In other words the political forces representing the old exploitative white-supremacist order, are being directly mobilized en masse by the US in this struggle against the progressive regimes in Latin America.

Associated with this is the phenomenon of large-scale street protests and demonstrations organised by the US-backed forces which claim to be defending democracy even though they are arrayed against the legal democratically-elected governments. Counter-revolutionary coups in short have acquired a mass character instead of being mere military putsches, as was the case earlier.

Thirdly, the economic difficulties, though largely created by imperialism itself, in addition to the functioning of the world capitalist economy, are blamed not only on the progressive governments, but more explicitly on their Left-wing policies. Economic difficulties are attributed to the nationalisation of mineral resources, to State intervention in the economy, to the anti-capitalist policy stances, and so on. The propaganda for the coup in short incorporates an ideological attack on any interference with the functioning of the neoliberal order. This ideological attack is necessarily fuzzy. It invokes concepts like “corruption”, and “incompetence”: but these are supposed to be synonymous with State interference with the neoliberal order.

Fourthly, by the same token, the coup explicitly puts forward an agenda which involves the restoration of the pro-corporate neoliberal order. A plan for “Democratic Transition” put forward in Venezuela, for instance, which outlines what the coup will do, includes: (i) The reactivation of the productive apparatus (by accessing IMF funds); (ii) The removal of all controls, regulations and “bureaucratic obstacles, and punitive measures”; (iii) International investment within a regulatory framework that creates confidence and effective protection of private property; (iv) Opening for private investment in public enterprises; (v) Approval of a new Hydrocarbon Law that would allow private capital to hold majority shares in oil projects; (vi) The private sector will be responsible for the operation of utility assets; (vii) Efficiency in order to reduce the size of the State.

This is an unashamedly neoliberal agenda; yet it constitutes the programme of the coup. Such a clear message that the democratically-elected government should be overthrown in order to push a corporate agenda has never been given so explicit before.

Fifthly, current coups proceed on the basis of the backing of all the imperialist powers, even though they may be effected by the US. Thus the European Union was asked by Trump to recognise the pretender Juan Guaido’s government as the legitimate government of Venezuela, and it duly did. It is a sign of the times, both of the fact that the US itself does not have the same strength as it had before, and also of the fact that we live in a world where inter-imperialist rivalries are muted, that the cooperation of the others is required by the US even when it undertakes an imperialist action.

And finally, the case of Venezuela shows the important role that the media is now playing in softening people into accepting that an imperialist action against an elected third world government constitutes a defence of democracy. Newspapers from The New York Times down have been pushing this line.

We have in short a new world order now, where the equating of corporate interests with democracy is becoming an accepted principle. The Venezuelan people have stood firm until now against the US-sponsored coup; but because of this the US is now threatening them with armed intervention. If armed intervention comes about, then it will be the first such action in recent years against a sovereign country, not on the grounds, no matter how flimsy, that it poses a security threat to the US or that it has somehow harmed US interests, but simply on the grounds that it has dared to depart from a regime of neoliberalism.