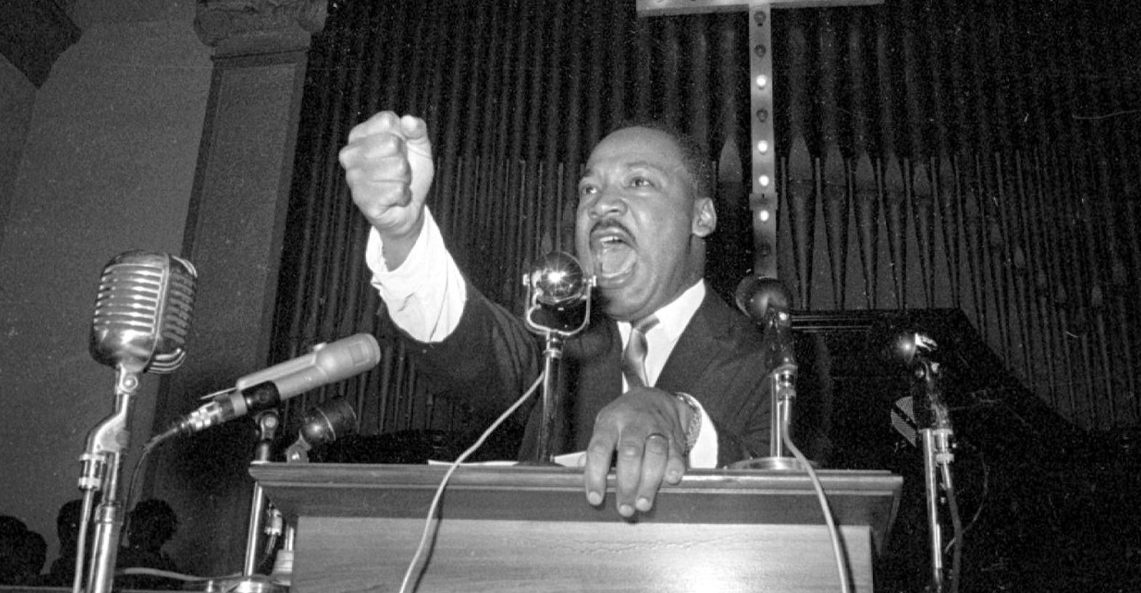 The Annual Resurrection Of A Fake Dr. King

Above photo: King speaks in Eutaw, Alabama in June 1965. AP.

And Re-entombment of Black Liberation Movement.

It is January, and in the U.S. this means it is time for the annual ritual of revisiting the white-washed, de-radicalized, pro- “American” M.L. King fairytale as part of the official celebration of King’s birthday.

In the official story, Dr. King was not the creation of the movement that was fighting for the democratic and human rights of Black people. No, it was Dr. King who created the movement, according to the colonial white elite and the neocolonial Black misleadership. In this story, the objectives of the movement were not for radical social transformation and Black self-determination but the redemption of the U.S. settler-colonial nation/state and the quiet integration of Black people into the state. In other words, to complete the establishment of a “more perfect nation,” as Obama would put it.

But King did not just show up to save Black people. Dr. King was a product of the post-war Black movement. And as such, the King that the movement produced reflected the changing, and sometimes contradictory development of that movement. As a product of the movement, Dr. King’s experiences as the leader of the Southern Christian Leadership Conference (SCLC) evolved. He began to raise criticisms of capitalism, eventually opposed imperialist war and embraced a program of class struggle represented by the Poor People’s campaign.

Positions that created tensions in the civil rights wing of the black liberation movement and make King a target for assassination.

This is the King that BAP recognizes. The King that in his last few years of activism was finding his way to the Black radical tradition, a tradition that takes an uncompromising position on colonialism, structural white supremacy and war.

This commitment to the highest articulations of our people for peace, people(s)-centered human rights and the belief that the Pan European white supremacist colonial/capitalist patriarchal project can be defeated, is what animates the worldview and actions of the Black Alliance for Peace.

And it is why BAP takes an uncompromising position on standing with and defending peoples’ and nations who find themselves in the crosshairs of U.S. and European aggression, no matter the criticism we receive from the social imperialist left and morally bankrupt liberals.

Below, you will see just some of the courageous positions that our members have taken in opposition to imperialism and war. Despite questions, we proudly accepted the invitation to attend the inauguration of Daniel Ortega as the newly elected president of Nicaragua. BAP’s representative Margaret Kimberley was given a place of honor on the stage along with the heads of states from Cuba and Venezuela.

As Margaret Kimberley said in her statement following the inauguration, BAP is clear on its mission and responsibility at this critical moment in history. An unambiguous commitment to human rights and anti-colonialism guides our worldview and politics. And for that – we are unapologetic.

“As an organization committed to reviving the Black radical tradition, and committed to an anti-imperialist stance, the Black Alliance for Peace is always ready to defend human rights.

This hemisphere in particular has been viciously targeted by the U.S. government and its vassals in the European Union and United Nations. The Organization of American States should be a platform for discussion and consensus building but it is a U.S. invention and operates under its thumb. The U.S. congress overwhelmingly approved the RENACER Act which legitimizes the regime change effort and makes a mockery of claims that the U.S. acts as a democracy. From Haiti to Nicaragua to Venezuela to Cuba, millions of people in this hemisphere live under U.S. dictates masquerading as democracy in action.

Black Alliance for Peace is committed to giving voice to the peoples of targeted nations and to providing insights and analysis that people in a supposedly free country are deprived of. Our mission demands that we do no less.”