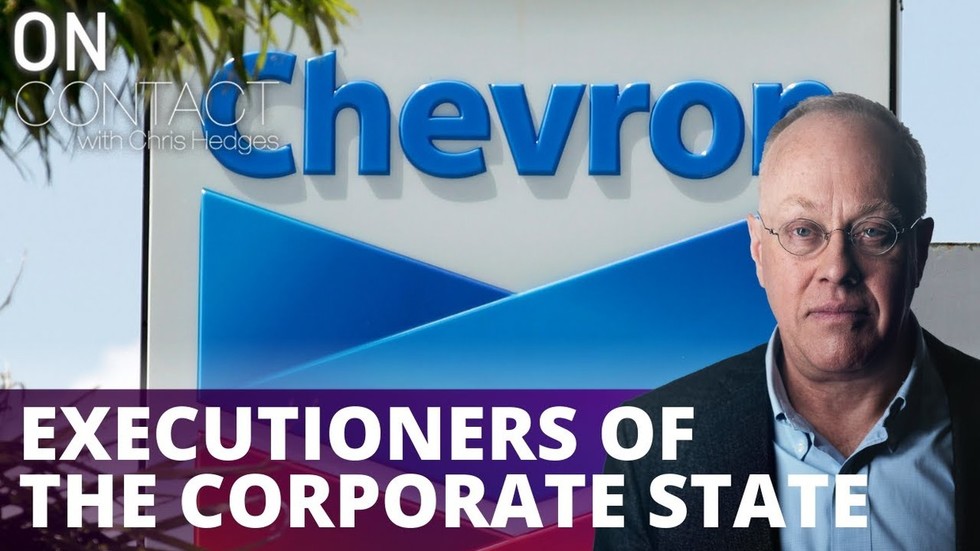 On Contact: The Anonymous Executioners Of The Corporate State

Judge Loretta Preska, an adviser to the conservative Federalist Society, to which Chevron is a major donor, sentenced the human rights attorney and Chevron nemesis Stephen Donziger to six months in prison on October 1 for misdemeanor contempt of court after he had spent 787 days under house arrest in New York.

Preska’s caustic outbursts – she said at the sentencing, “It seems that only the proverbial two-by-four between the eyes will instill in him any respect for the law” – capped a judicial farce worthy of the antics of the presiding judges at the major show trials of the Great Purges in the Soviet Union or the Nazi judge Roland Freisler, who once shouted at a defendant “You really are a lousy piece of trash!”

Donziger, a graduate of Harvard Law School, has been fighting polluting American oil companies for nearly three decades on behalf of indigenous communities and peasant farmers in Ecuador. His only “crime” was winning a $9.5 billion judgment in 2011 against Chevron for thousands of plaintiffs. The oil giant had bought Texaco oil company holdings in Ecuador, inheriting a lawsuit alleging it deliberately discharged 16 billion gallons of toxic waste from its oil sites into rivers, groundwater, and farmland. Since the verdict, Chevron has come after him, weaponizing litigation to destroy him economically, professionally, and personally.

The sentencing came a day after Donziger petitioned the court to consider an opinion by the United Nations Human Rights Council that found his house arrest a violation of international human rights law. The UN Human Rights Council said his house arrest counted as detention under international law and it was therefore illegal for Judge Preska to demand an additional six months in jail. Amnesty International also called for Donziger’s immediate release.

Donziger and his lawyers have two weeks to appeal the judge’s order that Donziger be sent immediately to jail. Preska denied Donziger bail, claiming he is a “flight risk.” If the Federal Court of Appeals turns down Donziger’s appeal, he will go to jail for six months. The irony, not lost on Donziger and his lawyers, is that the higher court may overturn Preska’s ruling against him, but by the time that decision is made he will potentially have already spent six months in jail.