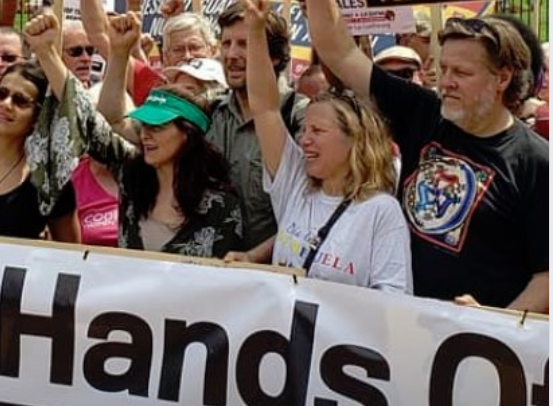 The Assault On The Venezuelan Embassy

Above and below: Anya Parampil an embedded reporter from the Grayzone Project with the Embassy Protection Collective along with the final four protectors who left the embassy after being arrested by federal police: Adrienne Pine, David Paul, Margaret Flowers, and Kevin Zeese. They are marching from Venezuelan embassy to White House the day after they were released from jail. Photo by Bob Witanek.

Events that transpired Thursday at the Venezuelan embassy in the upscale Washington neighborhood of Georgetown expressed in microcosm the criminality and contempt for international law that characterizes US imperialist operations the world over.

US Secret Service agents, Washington’s Metropolitan Police and agents of the State Department’s Diplomatic Security Service, hundreds of armed men, stormed the building to evict four peaceful antiwar activists, part of a larger contingent that had been staying in the embassy for the last month at the invitation of the Venezuelan government.

The units deployed included agents wearing battle fatigues and helmets and carrying battering rams to force their way into the embassy. Many of those sent to break into the building wore flak jackets.

This deployment of overwhelming militarized force was hardly necessary given the small number of activists in the building and their prior assurances to US authorities that they would not resist what they regarded as an unlawful arrest. It was staged as a demonstration of the power of the US state, an act of intimidation against anyone opposing its machinations, both domestic and international, and a graphic statement that might makes right, the law be damned.

The Venezuelan government has denounced the invasion of its embassy as a gross violation of the Vienna Convention on diplomatic relations signed by the United States in 1963 and observed by virtually every country in the world. It affirms that embassies and other diplomatic facilities are “inviolable” and cannot be entered by agents of the host government without the express permission of the head of the diplomatic mission. It likewise requires that the host government protect diplomatic premises “against any intrusion or damage and to prevent any disturbance of the peace of the mission or impairment of its dignity.”

Washington has ridden roughshod over these provisions in relation to the Venezuelan embassy on every score. Before forcing its way into the building, it had allowed a mob of fascistic and right-wing thugs to mobilize outside the embassy, erecting tents on its grounds and physically assaulting those supporting the activists inside or attempting to bring them food. These elements repeatedly attempted to break into the embassy, damaging its facilities, and threatened those inside with murder and rape. When police intervened to halt the most egregious of these illegal acts, they immediately released the perpetrators, facilitating and inflaming the lynch mob atmosphere.

For decades Washington has treated Iran—which it now threatens with war—as a so-called “rogue state” for the events of November 1979. In the throes of a revolution, militant students stormed the US embassy in Tehran, taking US personnel hostage. Washington went to the UN and the International Court of Justice, charging the Iranian government with violating the Vienna Convention for failing to halt the attack.

The Iranian government did not participate in these proceedings. Instead, it insisted that the action had to be treated in the context of the previous quarter-century of US imperialist crimes in Iran, from the 1953 CIA-orchestrated coup that overthrew the nationalist government of Mohammad Mossadeq, through to Washington’s support of the Shah’s dictatorship and the murders and torture carried out by its hated Savak secret police. The Iranian government insisted that the embassy issue could be resolved only through the US extradition of the Shah back to Iran and the return of the vast amounts of wealth he had taken with him.

Six years after going to the court in The Hague over the US embassy in Iran, Washington renounced the court’s jurisdiction in order to avoid prosecution for its terrorist contra war against Nicaragua.

When it comes to “rogue states” there does not exist a government on the planet that can rival that of the United States of America.

In storming the Venezuelan embassy, it claims to be acting on behalf of the “government” of Juan Guaidó, the far-right, CIA-backed political operative who proclaimed himself the “interim president” of Venezuela last January, with the backing of Washington. Nearly four months later, this regime change operation launched with Guaidó’s self-“swearing-in” has waned. An attempt on April 30 to consummate the coup with an appeal for an outright military overthrow of the Maduro government failed miserably, eliciting neither a military revolt nor any significant support from the population.

The seizure of the embassy is part of an increasingly open appeal for direct US military intervention to bring about the desired regime change.

The embassy is now to be occupied by Carlos Vecchio, a fellow member of Guaidó’s far-right, US-funded Voluntad Popular (Popular Will) party. Vecchio went into exile after being charged with fomenting violence in Venezuela. While proclaimed by Guaidó as Venezuela’s “ambassador,” he, like the “interim president” himself, represents neither the Venezuelan people nor any real government. His “embassy” cannot issue passports or visas or conduct any other business common to diplomatic missions.

Rather, both he and Guaidó are paid agents of Washington. They are pawns in the US drive to establish unfettered control by the US energy conglomerates over Venezuela’s oil reserves, the largest on the planet, and to roll back the growing influence of both China and Russia in Venezuela and Latin America more broadly, which US imperialism has long regarded as its “own backyard.”

One of Vecchio’s first actions as “ambassador,” newly installed by the US Secret Service, will be to meet on Monday with the chiefs of the Pentagon’s Southern Command (SOUTHCOM), which oversees all US military operations in Latin America and the Caribbean. In a letter to SOUTHCOM, the Guaidó camp said its aim was to conduct “strategic and operational planning so that we may… restore our democracy.”

This “democracy” is to be provided a war for regime change by the US military to install the most right-wing representatives of Venezuela’s ruling oligarchy, committed to turning over the country’s oil wealth to Exxon Mobil, Chevron and the rest of Big Oil. Such a regime can be imposed only by means of a bloody war and the most ruthless repression of the Venezuelan working class.

With its invasion of the Venezuelan embassy, Washington is cementing a precedent. It claims the right to overthrow any government in the world, select its own puppet to head the replacement, and install its representative in the country’s embassy in Washington to assist in coordinating and legitimizing US military intervention.

This criminal action has been largely passed over in silence by the US corporate media and justified in the few reports that have appeared. Noteworthy was the coverage of the New York Times, which claimed that “The dissonance of a Venezuelan diplomatic compound being occupied by a group of predominantly white, American, anti-interventionist activists had been a source of resentment among the predominantly Venezuelan protesters who had surrounded the embassy.”

What filthy nonsense! The “resentment” among the fascist thugs who besieged the embassy was not over the racial or national identity of those opposing the US regime change operation, but rather their standing in the way of the exiled right-wingers and oligarchs returning to power on the backs of the US military. As is its wont, the Times uses right-wing identity politics to justify imperialist criminality.

Nor has there been a hint of opposition from the Trump administration’s ostensible political opponents in the Democratic Party, all of whom, from Biden to Sanders, have lined up behind the regime change operation in Venezuela.

The Venezuelan embassy siege, with its mobilization of massive police power alongside right-wing gangs to accomplish illegal aims that further the interests of the US ruling elite, constitutes a warning to the working class in the United Sates and all over the world.

In the face of a resurgent class struggle and the insoluble contradictions of the global capitalist system, the capitalist ruling elites in the US and every country are shedding even the pretense of democratic principles and processes and turning ever more openly toward authoritarian rule and the promotion of fascistic and right-wing forces.

The storming of the Venezuelan embassy in Washington follows the throwing open of the doors of the Ecuadorian embassy in London to a British police snatch squad acting on behalf of US prosecutors seeking to punish WikiLeaks founder Julian Assange for exposing US war crimes, laying charges against him that could result in his execution.

The defense of democratic rights, together with the struggle against the threat of war in Venezuela, lies with the international working class, whose interests are diametrically opposed to those of the warmongers in the US ruling class and their lackeys in the Democratic Party and the media.