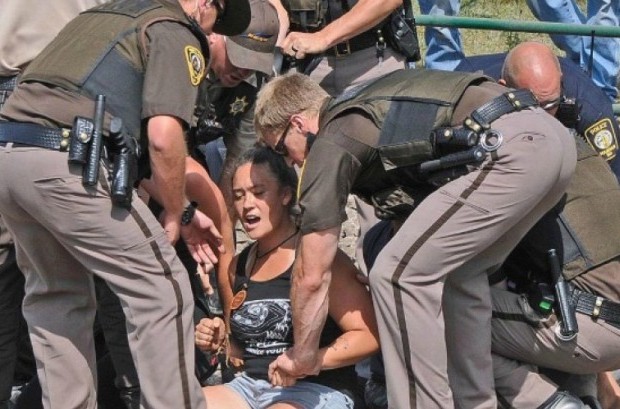 The Axis Of Destruction And Hope

If you want to understand the climate crisis today, you need to journey roughly along the 95th parallel, from Louisiana in the south to the the Standing Rock Sioux Reservation in the Dakotas.

In the Bayou State, there’s great courage, as local people work to rescue their neighbors from rising waters. So far, 20,000 people have been snatched to safety from homes, offices, hospitals, schools in the wake of a three-day siege of endless rain that broke flood records on river after river. The images are astonishing, like something from Mad Max: a thousand cars trapped on an interstate as helicopters dropped food to keep people alive.

Parts of Southern Louisiana are still underwater after a weekend of historic flooding. @JudyWoodruff reports https://t.co/C6OnSTOtoa

There’s no doubt what’s causing this: crazy rainfall like this comes when you’ve heated the atmosphere, allowing it to hold more water vapor. The Gulf of Mexico is at record temperatures, pumping moisture into that atmosphere. What goes up must come down, and it came down on Louisiana (though Mississippi and Missouri are getting their share too, and the Illinois State Fair got flooded, and there’s tons of water coming down in a long arc all the way to New York). This flood will do a billion dollars or more in damage: it’s a hurricane without a hurricane. It’s also a harbinger of things to come – the new normal that’s prompting local leaders to consider mitigation strategies through an equity lens. This is evidence that the future is now. And there’s no doubt what’s heating the atmosphere: it’s the carbon and methane we’re pouring into the atmosphere at such a breakneck pace. That’s why what’s happening in North Dakota is so important. There, almost spontaneously, an uprising has begun on the very center of America’s latest oil boom in the Bakken shale. In the last week 18 people and counting, including the tribal chairman, have been arrested trying to block the so-called Dakota Access Pipeline, which would carry half a million barrels a day of crude out of the Bakken to refineries in Illinois.

People protest the construction of a 1,100-mile pipeline that will carry crude oil from North Dakota to Illinois. https://t.co/KTs7xMhBG9

There are crucial local issues at stake: water quality in the region, which will be imperiled if and when the oil leaks, and the sacred sites being disturbed by the construction. But there’s also the global issue: if that oil makes it to the refinery without leaking, it will be turned into gasoline and that in turn will add yet more carbon to the atmosphere. Which is to say: people on rooftops in Louisiana hoping for someone to rescue them.

So in North Dakota, as in the tarsands of Alberta, and at the proposed Cherry point coal port in Washington, and on the pipeline routes in British Columbia, indigenous people are leading the fight against the planet’s destruction. It’s not hyperbole to say that the most important force in the fight for the planet’s survival has been the recognition of native leadership, in North America and elsewhere, in the last five years. The Keystone pipeline would never have been stopped without native organizing, nor plans for the world’s largest coal mine in Australia.

The earth’s oldest people are — maybe just in the nick of time — being recognized as its most important protectors. And they need us to stand behind them.

Tomorrow the axis of destruction and hope may run somewhere else: from fire-plagued California, say, to the environmental justice protesters fighting new gas pipelines in downtown Boston. But today, right now, if you want to help, here’s a local group providing relief in Louisiana. And here’s the legal fund to make sure those stalwart fighters in the Dakotas can keep standing their ground.