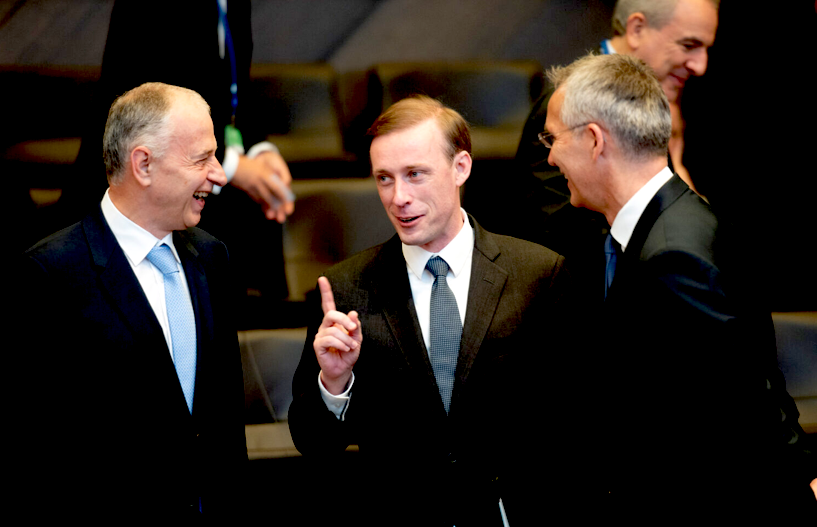 Communications between the U.S. and Russia are essential for preventing an out-of-control crisis and a conduit exists for ongoing, high-level dialogue.

But what is it really for?

According to The Wall Street Journal, White House National Security Advisor Jake Sullivan has been involved with a secretive “back channel” line of communication with top Russian officials as part of an effort by the U.S. and Russia to prevent the war in Ukraine from escalating into a nuclear conflict.

Among the officials named as representing the Russian conduit for this “back channel” are Yuri Ushakov, a senior foreign policy adviser to Russian President Vladimir Putin, and Nikolai Patrushev, the head of Russia’s security council.

In comments made shortly after the WSJ article appeared, Sullivan confirmed that he has been working to keep communication channels between the United States and Russia open despite the war in Ukraine, adding that it was “in the interests” of the White House to maintain contact with the Kremlin.

Speaking at the Economic Club of New York, Sullivan didn’t say that he himself has been engaged in the talks reported by the WSJ, only that the U.S. has “channels to communicate with the Russian Federation at senior levels.”

Sullivan has publicly availed himself of such channels in the past, conducting telephone calls with both Ushakov and Patrushev about European security and Ukraine on Dec. 20, 2021, and on March 16. Sullivan alluded to the existence of a “back channel” with Moscow in September when speculation was rampant about the possibility of Russia using tactical nuclear weapons against Ukraine.

Sullivan publicly declared then that the Biden administration had “communicated directly, privately at very high levels to the Kremlin that any use of nuclear weapons will be met with catastrophic consequences for Russia.”

Sullivan has a history of being personally involved in sensitive “back channel” contacts. In July 2012, Sullivan, then director of policy planning at the State Department, flew to Muscat, Oman, for secret meetings with Iran about a possible nuclear deal.

In March 2013, while serving as the national security adviser to then-Vice President Joe Biden, Sullivan was a member of a small delegation of U.S. diplomats who flew to Oman for a series of secret meetings with Iranian officials which culminated in the Joint Comprehensive Plan of Action, or JCPOA — better known as the Iran nuclear deal.

But the key to who might be taking the lead in the current Russian “back channel” lies with the man who headed up the March 2013 delegation in Oman — William Burns, a career diplomat who at the time served as deputy secretary of state and is now director of Central Intelligence.

His name is synonymous with “back channel.”

It was Burns who, based on these secret Oman meetings, hammered out the initial draft of the JCPOA. The background story, described by Burns in his autobiography, aptly titled The Back Channel, is what made the long-time diplomat an attractive choice for Biden to head the C.I.A.

When the Biden administration wanted to discuss the escalating crisis surrounding Ukraine in the fall of 2021, it was Burns who was dispatched. In addition to meeting with Patrushev, Ushakov and other senior Russian security officials (including his Russian counterpart, Sergei Naryshkin, the director of Russia’s Foreign Intelligence Service, or SVR) Burns had a conversation with Putin by telephone.

This kind of high-level access is what makes Burns the ideal conduit for a substantive “back channel” between the U.S. and Russia.

In July, Burns flew to Armenia in a visit that was not only unannounced, but also the first ever by a C.I.A. director to that nation. Prior to Burns’ arrival, teams of U.S. and Russian security officials arrived in Yerevan where they engaged in confidential discussions about the Ukrainian conflict — in particular on measures that could be taken to avoid escalation leading to nuclear war.

Burns’ visit appeared timed to these discussions, as did the visit of the head of the Russian SVR, Sergei Naryshkin, three days later. According to Russian media sources, Naryshkin was cryptic about the purpose of his visit. “My visit to Yerevan is definitely not connected with the arrival of my American colleague. But I don’t exclude that his visit is on the contrary connected with mine.” And it looks like the Burns-Naryshkin “back channel” is still active as just last week they met in Ankara, Turkey.

Significantly, senior Biden administration officials quickly quashed any notion that Burns was engaged in “back channel” diplomacy regarding an end to the Ukraine conflict. The Washington Post reported:

“’He is not conducting negotiations of any kind. He is not discussing settlement of the war in Ukraine,’ the NSC spokesman stressed. Instead, said the spokesman, ‘we have channels to communicate with Russia on managing risk, especially nuclear risk and risks to strategic stability.’”

The U.S. mainstream media had been enthralled with the narrative of a Sullivan-run back channel seeking an early end to the conflict.

Russia will not negotiate a settlement on U.S./Ukrainian terms, only Russian terms. Russian terms will be dictated by the arrival of 220,000 fresh troops, organized into 10-15 divisions, starting next month.

Burns’ job is only to keep what will be a major escalation of the war from spinning out of control – to keep it from going nuclear. That has been his job from the start.

Based upon the critical state of communications between the U.S. and Russia, and the necessity of maintaining a channel for ongoing dialogue, one can expect that the Ankara meeting between Burns and Naryshkin will not be the last between these two individuals.

Despite this, the notion of a separate Sullivan-run “back channel,” one focused on finding a diplomatic off-ramp to the Russian-Ukrainian conflict, lingers, promoted in part by the self-serving attitude of a Biden administration that believes itself somehow in control of events in Ukraine.

The conditions for a settlement on U.S. and Ukrainian terms — such as Russia withdrawing from the four territories it recently annexed as well as Crimea, paying reparations and turning over senior military and civilian leaders for prosecution as war criminals — have almost no chance of happening.

Such thinking only underscores the hubris-laced fantasy world Washington has crafted for itself. The notion that Russia is somehow losing its military conflict with NATO-backed Ukraine, and its economic war with the West, is belied by the increasing desperation inherent in the growing calls for a negotiated settlement by senior U.S. officials.

General Mark Milley, chairman of the Joint Chiefs of Staff, has argued that now is the time for negotiations, given the fact that, according to him, there is neither a way for Russia to win nor for Ukraine to regain its lost territory.  “So, if there’s a slowdown in the tactical fighting, that may become a window — possibly, it may not — for a political solution, or at least the beginnings, for talks to initiate a political solution,” Milley said.

Milley’s pro-negotiation stance, however, is opposed by many of America’s European partners, whose position is perhaps best captured by NATO Secretary General Jens Stoltenberg, who on Nov. 14, while speaking to the heads of the foreign and defense ministries of the Netherlands, declared:

“The only way to achieve a solution to the Russian-Ukrainian conflict is on the battlefield. Many conflicts are resolved at the negotiating table, but this is not the case, and Ukraine must win, so we will support it for as long as it takes.”

Russia, it appears, fully agrees — this conflict will be settled on the battlefield. At the moment, Russia is shutting down the Ukrainian economy and Ukrainian society by destroying large sectors of Ukraine’s electrical power grid, throwing much of Ukraine into a cold darkness just as winter sets in.

Russia has stabilized the battlefield, withdrawing from untenable terrain while pouring 87,000 recently mobilized troops into the front lines to solidify its defenses. Meanwhile, it continues to undertake offensive operations in the Donbass, destroying Ukrainian forces while capturing territory that is part of the Donetsk.

Ukrainian casualties have been horrific, and overwhelmingly lop-sided — in the month of October alone, in the Kherson front, Ukraine lost some 12,000 men, while Russian casualties were around 1,500, according to the Russian Defense Ministry. Ukraine has released no figures, but the U.S. says 100,000 soldiers on both sides have been killed in the conflict, a figure impossible to verify.

Over the horizon, in combat training centers throughout Russia, more than 200,000 additional troops are finalizing their combat training and preparations. Sometime next month they will begin arriving on the battlefield, organized into 10-15 division equivalents.

When they arrive, Ukraine will have no response, having squandered its NATO-trained and equipped forces on pyrrhic political victories. The photo opportunities on the city square in Kherson will fade into memory once Russia unleashes this new force.

And there’s nothing either NATO or Ukraine can do to stop them.

While Russia engaged in negotiations with Ukraine at the beginning of the war and offered a deal to Kiev, which was stopped by the West, the facts on the ground have since changed.

Anyone attempting to breathe life into the concept of a Sullivan-driven “back channel” designed to bring Russia to the negotiating table must first discount Russia’s improving military posture. Russia simply will not be drawn to a negotiation designed to negate the advantages it has been accruing on the battlefield and beyond.

The Sullivan “back channel” is little more than the collective West negotiating with itself.

Russia’s negotiation will be on the battlefield.