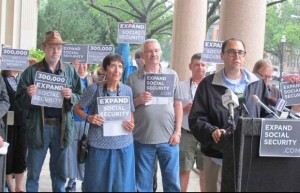 The Battle For Social Security Is Not Over

Obama’s reversal on Social Security cutbacks isn’t the major victory it appears to be. Here’s why.

Progressive organizersand blue-leaning media have been declaring victory because the Obama White House has dropped its push for using a new cost-of-living formula that would cut into future increases in monthly Social Security benefits.

Articles such this detailed retelling from In These Times proclaim that Social Security was “saved,” when in fact, the formula for future Social Security benefits is unchanged, and is still insufficient for the retiring baby boom generation.

Meanwhile, glee over the White House’s reversal eclipses the harsh truth that Obama’s proposed 2015 budget would raise out-of-pocket costs for 50 million seniors—saving the government $60 billion—starting in 2018 by increasing Medicare deductibles, co-pays and premiums, and adding a surcharge if people buy supplemental insurance coverage.

“There are a lot of egregious things in the President’s budget for Medicare—including means-testing for people with modest incomes,” said Maya Rockeymoore, chairwomen of the National Committee to Protect Social Security and Medicare. She called the White House’s reversal on the Social Security COLA “a win in a minor skirmish in a very long battle.”

“The fact of the matter is these programs are still not safe,” Rockeymoore said, referring to the two primary government safety nets for America’s seniors: Social Security and Medicare. “The dominant thinking is not aligned with expanding these benefits.”

For many years in Washington, the debate around government social insurance programs has been dominated by austerity—how and when future cuts to beneficiaries could occur. That frame has begun to shift, as progressive organizers and several Democratic senators have pushed back at the GOP and Wall Street’s federal debt crusaders and talked about expanding benefits, particularly with elderly Social Security recipients.

Last week, a Senate committee held a hearing on the Canadian single-payer healthcare system. This coming Wednesday, a Senate hearing will be held to “Explore Need to Strengthen Social Security and End Predatory Practices in 401(k)s and IRAs.” This is progress, to be sure, but it is only the starting line for potential federal action ensuring that America’s next generation of retirees will not slide into poverty as they age.

Americans should not confuse a political victory that preserves an inadequate status quo with real reforms that would increase economic security for tens of millions of seniors. Here are a dozen facts about America’s deepening retirement security crisis to keep in mind as the battle unfolds:

1. The numbers of Americans over age 65 are projected to increase from 14 percent of the population to about 21 percent of population by 2035.

2. As of February 2014, there were 63.2 million Social Security recipients, including 41.9 million people over age 65 and over and 14.2 million people with disabilities under 65. Last year, SS benefits kept 21 million Americans out of poverty, including 14 million seniors.

3. In 2012, 42.1 million seniors, as well as 8.5 million people with disabilities, receivedhealthcare through Medicare, the government-run health program for people over age 65. Seniors who receive Medicare pay monthly premiums for the health coverage.

4. Social Security’s old age and survivors’ trust fund had a surplus of $2.54 trillion at the end of 2011, and is solvent through 2033. Contrary to GOP budget hawks who fret about the federal debt but don’t want to pay higher taxes, it is on firm fiscal ground.

5. Most people don’t know that Congress has cut Social Security benefits for the elderly by 24 percent since 1983, by delaying and reducing annual cost-of-living increases. This underscores the central question policymakers keep ducking: how much do elderly retirees who mostly rely on Social Security and Medicare need to live today?

6. Though Social Security benefits are modest, averaging $1,295 a month for retirees as of January 2014, for one-third of seniors that’s all they live on. For two-thirds it’s more than half.

7. America has a huge racial wealth gap, with blacks having a nickel and Latinos having six cents in savings for every dollar in savings held by whites.

8. Gender disparities are also a huge issue, as seven out of 10 seniors living under 125 percent of the federal poverty line ($14,587) are women.

9. Until recently, the social insurance debate has been dominated by cutting benefits. But expanding Social Security benefits won’t hurt the economy. It is now 5 percent of GNP. Keeping current benefits past 2033 with no other changes would come to 6 percent.

10. There are many smarter ways to assess future benefit levels. One is using an elderlyconsumer price index, which is 0.2 percent higher than the inflation gauge used today. That formula looks at costs that are higher for seniors, such as healthcare.

12. Almost all Americans support both these reforms, with 87 percent for scrapping the cap and 82 percent for slight SS tax increases.

These dozen facts are the starting line for an informed debate on America’s encroaching retirement security crisis and the elements of fair-minded solutions. Progessives should not be declaring victory when the status quo isn’t budging. Should the White House get its wishes, seniors will be facing higher out-of-pocket Medicare costs in 2018.

Instead, the focus should stay fixed on why far too many Washington power brokers want to cut future Social Security benefits, raise future Medicare costs and keep a tax structure where the wealthy grossly underpay into the system. There is no other issue in America where those in power are so out of sync with the voters and the people.

Steven Rosenfeld covers national political issues for AlterNet, including America’s retirement crisis, the low-wage economy, democracy and voting rights, and campaigns and elections. He is the author of “Count My Vote: A Citizen’s Guide to Voting” (AlterNet Books, 2008).