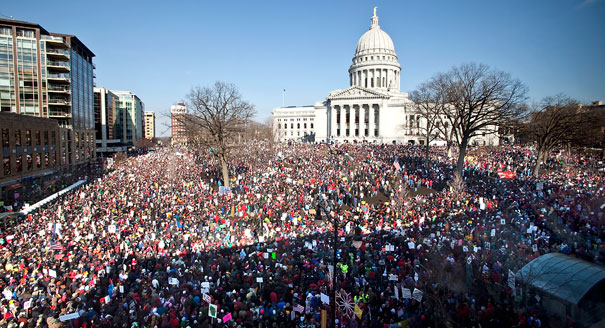 The Battle For Wisconsin: The Revolt of 2011

Introduction to the pamphlet: The Battle for Wisconsin: History and lessons from the working-class revolt of 2011 (more below)

The uprising in Wisconsin in February and March 2011 was an event of enormous historical significance for the American labor movement. Hundreds of thousands of workers and young people rose up against the attempt to strip public sector workers of their collective bargaining rights. Despite ending in defeat, it potentially marked the beginning of the end of a very long, deeply demoralizing retreat.

7% are union members! The end of the post-WWII economic boom in the 1970s spurred big business to move to the offensive, and labor’s steady decline can be traced back to Ronald Reagan’s smashing of the air traffic controllers union, PATCO, after their 1981 strike.

But three decades of neo-liberalism and globalization also led straight to the massive crisis of capitalism that opened up in 2008. Seeking to make working people foot the bill for the crisis, the corporate ruling class and its two political parties have relentlessly attacked our living standards and past social gains. The public sector and public sector unions have been on the receiving end of some of the sharpest attacks.

Initially, however, there was very little organized resistance to the devastation being caused by the crisis. The labor movement seemed unwilling to or incapable of giving voice to the growing anger in society at the bailouts of the banks, the endless rounds of cuts in education and other social services, the millions of foreclosures or, more broadly, the massive increase in social inequality.

It took the provocation of frontal attacks on union rights by newly elected right-wing Republican governors and state legislators in a number of states to finally spark serious resistance. Wisconsin was only one of 18 states where anti-union legislation of one form or another was introduced at the start of 2011. But Wisconsin’s role as the first state to give legal recognition to public sector unions and the birthplace of the American Federation of State, County and Municipal Employees (AFSCME), as well as the radical history of its state Capitol, Madison, help to explain why the clash was sharpest there.

This pamphlet is a detailed account authored by an active participant in the struggle. It shows how rapidly the movement developed and how quickly it radicalized. It highlights the role of high school student walkouts in paving the way for teacher sickouts, which galvanized the wider resistance. Once begun, the movement touched a deep nerve across the country and demonstrated beyond all doubt that when organized workers take a stand for their rights they can win support from much broader sections of society. Besides public and private sector trade unionists, the mass protests in Madison included large numbers of non-union private sector workers as well as large numbers of young people. National polls showed support for the workers at around 60%.

As in any serious social struggle, the consciousness of the participants evolved by leaps and bounds. It was noteworthy how the protesters took inspiration from the Tunisian and Egyptian revolutions that had recently taken place. In turn, people across the world, including in the Middle East, were heartened to see the “sleeping giant” of the American working class beginning to wake up. This incipient internationalism anticipated the global dimensions of the Occupy movement.

Most critically, people began to ask serious questions about how to defeat the corporate forces arrayed against them. There was plenty of confusion but there was also enormous willingness to sacrifice. The experience of Socialist Alternative was that our call for a oneday general strike as part of escalating the struggle received an extremely positive reception.

Given all this, a key question the pamphlet addresses is why the Wisconsin uprising went down to defeat. The pamphlet recounts the role of the Democratic Party and the trade union leadership, especially the national leadership, in diverting the movement away from class struggle and into the “safer” channel of recall elections. We also look in detail at the role of local labor activists, including a few leaders who publicly called for a general strike, as well as the role of left groups.

The inescapable conclusion is that, while thousands of workers and young people were prepared to follow a fighting lead, there was no force capable of galvanizing and directing that mood. As a small organization with almost no presence in Wisconsin before this battle, Socialist Alternative intervened to try to point in the direction of what was needed to win and to develop activists who can play a role in future struggles. Out of this we emerged with a real branch in Madison.

The Wisconsin uprising can be compared to the mass movement of immigrant workers in 2006, which also went down to defeat but pointed to the potential for the re-emergence of class struggle in the U.S. In a negative way, Wisconsin sharply demonstrated what it is going to take to defeat the corporate anti-union, anti-worker offensive. It is going to take old-fashioned class struggle, updated for 21st century conditions. It is also going to require at least a section of the labor movement to break from its political dependence on the Democratic Party. This is especially true for key public sector unions like the American Federation of Teachers and AFSCME.

Several developments stand out in the seven months since Walker’s anti-union legislation was ratified. In November, a referendum in Ohio overturned, by a significant majority, anti-union legislation very similar to Walker’s. The unions made a massive push to get out the vote. The outcome shows the ongoing potential to build broad public support for opposition to these measures. But then, in January, another severe blow was delivered when Indiana, traditionally a union stronghold, passed union-busting “right to work” legislation. Such measures may now be pushed in several other states. This is a mortal threat to what is left of the labor movement, not just in the public but in the private sector as well. In this context, it is more important than ever that the lessons of the Wisconsin struggle be learned.

But we must stress that the importance of the battle of Wisconsin is not just the bitter lessons of the workers’ defeat but the enormously positive effect that their stand has had across the U.S. For who can doubt that Wisconsin, along with the upheavals in the Middle East and Southern Europe, directly helped to lay the groundwork for the eruption of the Occupy movement several months later? The workers of Wisconsin ignited something that has gone far beyond the borders of their state. And in Wisconsin itself, the war between working people and the corporate overlords who would like to drive us back into a form of serfdom is very far from over. The battle of Wisconsin was the beginning, not the end.

Tom Crean is a teacher activist in New York City and a member of Socialist Alternative’s Executive Committee.

Author of the pamphlet, The Battle for Wisconsin, is George Martin Fell Brown, a graduate student and teaching assistant in mathematics at the University of Wisconsin-Madison. He is also a steward in the Teaching Assistants’ Association (American Federation of Teachers, Local 3220) and was an active participant in the protests from day one. He helped mobilize fellow teaching assistants to the Capitol protests and to union meetings. At the height of the movement, George helped initiate the union’s Strike Planning Committee. A longstanding member of Socialist Alternative, he helped build a new Madison branch during the course of the protests.

Others also played an important role in helping this pamphlet come to life. Thanks to Tony Wilsdon, Teddy Shibabaw, Philip Locker, Nathan Johnson, and Tom Crean for providing valuable political feedback. Thanks to Fran Karas for layout work, Dennis Prater and Dan DiLeva for copy-editing, and Ty Moore for coordinating production. And, of course, special thanks to the working class of Wisconsin, without whom none of this would be possible.

The Rise of Scott Walker

The Occupation of the Capitol

The Role of the Left

The Aftermath for Labor