The Battle Of Seattle, 20 Years Later

Above Photo: Peaceful protesters were met with a harsh police crackdown in Seattle in 1999, but they succeeded in shutting down WTO trade talks.Photo: Steve Kaiser.

Early on a cold gray morning 20 years ago this month, a modest procession of people left a church in downtown Seattle heading for the nearby convention center. There were about 80 people in the group. They walked quietly, each person lost in a moment of personal reflection. Above them were bobbed several brightly-painted paper mache monarch butterflies attached to long metal wires, a visual cue for anyone who became separated from the group.

The rain-soaked streets were empty yet everyone waited patiently for the lights to turn green so they could cross together. When they reached the intersection of Sixth Avenue and Union Street, they came upon a line of police passively standing on the far side of the intersection. The activists filled the intersection. Some sat down on the wet pavement and locked arms. Others began dancing and drumming. The paper mache butterflies hovered high overhead.

I was one of the people sitting down and locking arms. Other similarly organized groups of protesters seized intersections around the Washington State Convention and Trade Center. We were intent on shutting down the opening session of the World Trade Organization ministerial conference. An hour later thousands of more marchers arrived en masse from the north and the west. Downtown Seattle was now clogged with protesters who were chanting, dancing and singing. Giant paper mache puppets that bobbed above the festive crowd. When WTO delegates tried to enter the convention center, they were met with a wall of people who would not budge for them. 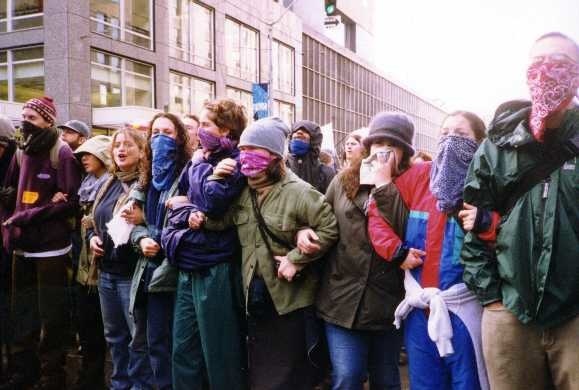 LINKS IN A CHAIN: Demonstrators taking a stand at the 1999 WTO summit. Photo: Stephanie Greenwood.

This surreal carnival of resistance was interrupted by stun grenades, rubber bullets, pepper spray, clouds of tear gas, and screams and tears, as the police unleashed their “less-than-lethal” arsenal upon us. But, it was too late to salvage the opening day of the summit. Demonstrations would continue throughout the week while more than 500 protesters were arrested.

Late on the final night of the WTO summit, hundreds of us who were holding a vigil outside the King County Jail for our detained comrades received stunning news. Talks on a new global trade pact had collapsed. A huge roar went up in the air. Delegates from the African nations had united and refused to be strong-armed into a bad deal by the United States and its European allies, citing the protests outside to underscore how unpopular the WTO’s agenda was even in the U.S. Victory never tasted so sweet.

The Seattle WTO Protests were the product of months and years of very deliberate organizing and movement building, though at the end of the placid 1990s they seemed to come out of nowhere. In fact, the target for the largest eruption of mass civil disobedience in the United States since the end of the Vietnam War was a Geneva, Switzerland-based entity unknown to most Americans.

The World Trade Organization was launched by member nations in 1995 with a seemingly innocuous mandate to expand global trade. But under its rules, trans-national corporations could sue individual nation-states over labor, environmental, public health and consumer protection laws that violated their “right” to maximize return on investment. When found guilty by the WTO’s secret tribunals — invariably the case — countries were subjected to onerous penalties until they repealed the laws in question.

When delegates to the WTO from more than 130 nations gathered in Seattle, it was expected they would hammer out an agreement on a sweeping new trade deal that would further expand the organization’s purview over the global economy. A century’s worth of social and economic reforms were at risk as well as our hopes for a more humane and environmentally sustainable global economy in the future. The WTO had already made a world of enemies. That is why old-growth forest defenders and laid-off steelworkers, small farmers and anti-sweatshop campaigners,Teamsters and environmentalists in turtle suits were all in the streets together.

It was an all hands-on deck moment. With no one in charge listening, throwing our bodies against the gears of the machine to make it stop seemed like the only hope. And then to our astonishment, it worked. Long before November 30, 1999, movements in the Global South had been fighting capitalist globalization (previously known as colonialism) for decades if not centuries, often at a great cost. Nonetheless, with journalists from around the world already on hand for the WTO conference, the spectacle of tens of thousands of citizens of the richest, most powerful country in the world confronting their own government in the streets riveted a global audience and galvanized opposition to an economic model that had seemed unassailable since the end of the Cold War a decade earlier.

“There are now two visions of globalization on offer,” Newsweek observed afterward. “One led by commerce, one by social activism.” 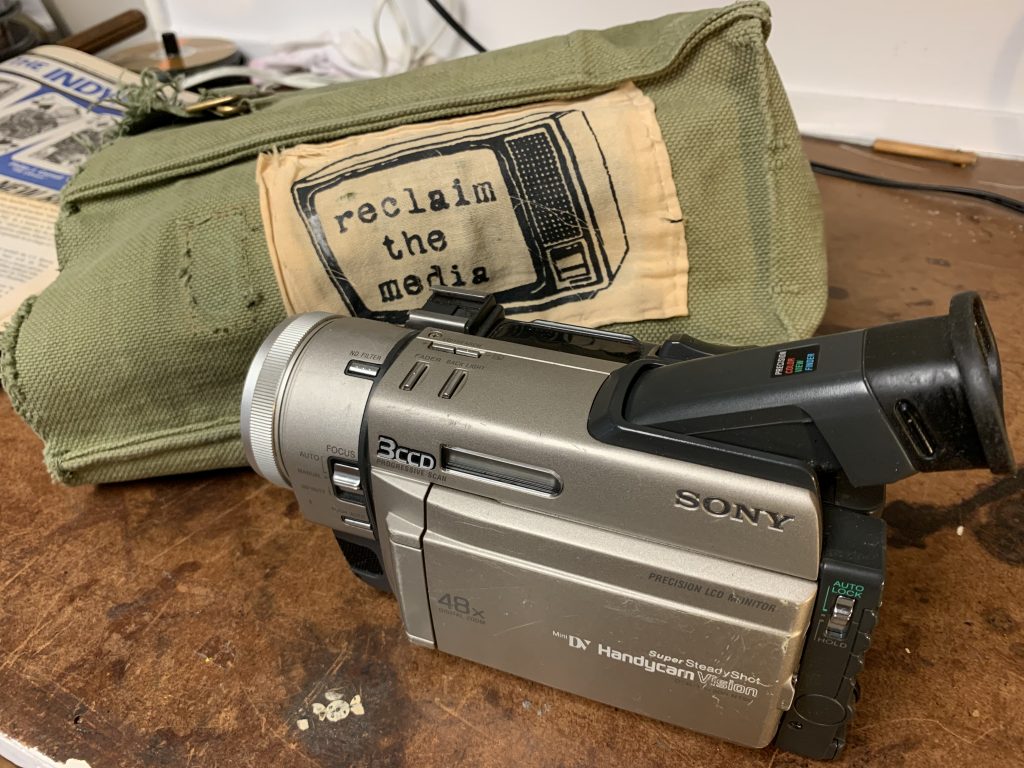 BEFORE SMARTPHONES: Citizen journalists used hand-held cameras like this to capture footage of the Seattle WTO protests and share it on indymedia.org. Photo: Renée Feltz.

A wave of global justice protests surged around the world over the next couple of years targeting not only the WTO but other global and regional financial institutions including the International Monetary Fund (IMF), the World Bank, the G8 and the Organization of American States among others. Wherever they met, global elites had to hide behind walls of police protection. The gulf between the 1 Percent and the 99 could not have been clearer.

Seattle also inspired the formation of Indymedia, a decentralized global network of radical reporters’ collectives that invented online crowd-sourced journalism. At its peak, the Indymedia network had chapters in 200 cities around the world, including New York. This newspaper started as an Indymedia project nine months after Seattle and drew its early inspiration from the energy that the WTO protests unleashed. We’re often asked where the “y” in The Indypendent comes from. That’s where, Seattle.

As many as 100,000 people were expected to descend upon Washington, D.C. in late September 2001 for protests against the IMF and the World Bank. Then, the September 11 attacks occurred. The government and the media depicted protest and terrorism as two sides of the same coin. The unions and the large NGOs that had been important allies at Seattle and other subsequent protests got cold feet and bailed. A vibrant movement virtually disappeared from public view overnight. Smaller radical groups tried to keep the flame alive but were no match for increasingly militarized police forces when they tried to carry out other Seattle-style shutdowns. Relying on a single tactic was not a strategy.

The Battle of Seattle helped throw the WTO into disarray for many years. But of course capital found myriad other ways to expand its power and reach. In the mid-2000’s, the left’s attention turned toward ending the war in Iraq. Eight years of a Bush presidency yielded to Obama’s cautious reformism. The only protests of note against trillions of dollars in Wall Street bank bailouts came from the Tea Party. As the years passed, the Battle of Seattle felt more like an exhilarating, one-off moment than an event of any lasting historical consequence.

Then, just when it seemed like protest was dead in this country, the Occupy movement took root in hundreds of parks and plazas across the country. Its 24/7 protest and militant tactics dominated the news cycle for two months, while its framing of the 99 Percent vs the 1 Percent permanently entered mainstream discourse and brought class politics back to life in the United States for the first time in decades. In style and substance and in its direct-action orientation, Occupy was Seattlesque in many ways, but led by a younger generation that grew up on the internet and social media and intuitively knew how to wield those tools.

In 2016, Bernie Sanders translated Occupy’s primal scream into a political platform that drew the support of millions. These days socialists and other left insurgent candidates — many of whom are women and people of color — are running and winning grassroots campaigns for elected offices high and low across the country, an achievement that was inconceivable 20 years ago. With the wind at its sails, the U.S. left finds itself in a moment that is both more promising and more dangerous than at any point in recent memory.

So did the Battle of Seattle change the world? No one protest can do that. But by spotlighting a rigged political and economic system and demanding radical changes, we were the proverbial canaries in the coal mine, signaling the devastating consequences of unfettered global capitalism and the future movements that would someday rise to challenge it. And if Trump and the Republicans try to steal the election next year, the kind of edgy but disciplined mass civil disobedience we saw in Seattle may take on a new relevance as well.