The Billion Dollar Companies In The Business Of Imprisoning Children

By Emily Ludolf, Occupy.com
November 10, 2018
| Educate!
The Billion Dollar Companies In The Business Of Imprisoning Children2018-11-102018-11-10https://popularresistance-uploads.s3.amazonaws.com/uploads/2017/12/popres-shorter.pngPopularResistance.Orghttps://popularresistance-uploads.s3.amazonaws.com/uploads/2018/11/170530-glawe-ice-detention-deaths-tease_icjdwm_0.jpeg200px200px

Revelations that the United States is conducting widespread detention of immigrant children who were separated from their families at the border sparked national outrage. Reports of the inhumane conditions and treatment drew shocked criticism, and the images of children in cages as well as the recordings of children screaming for their mothers resulted in the majority of the public disapproving of the cruel and unnecessary treatment of immigrants.

Much of the criticism has been aimed at Immigration and Customs Enforcement, or ICE, with rising calls to abolish the agency in its entirety. #AbolishICE has become a movement as people have reacted to the horrific behavior overseen by ICE officials. But the Trump administration and Republicans in Congress have showed little willingness to take responsibility for the abuses happening under their watch. And despite public outrage, ICE continues to run roughshod over human rights.

Like so many Trump era policies, the anti-immigrant activities aren’t just unconscionable: they’re profitable, particularly if you are well connected. Increased enforcement means good money, because ICE is more than just the 5,000 agents it employs. This is because the agency hires a vast array of businesses in the course of its work, from banks to buses. In shorthand, ICE is doing business with a lot of companies in its mission to violate the rights of children. Now, these companies are coming under increased scrutiny as anti-ICE advocates shed light on who is making big money by imprisoning children.

Many firms appeared unaware that they were facilitating ICE at all, but immigrant advocates have been busy informing those companies, some of which are now refusing to provide goods or services to the agency. Apart from Delta, all major American airlines have issued statements publicly distancing them from the child detention process. Some tech companies have responded to public pressure by ending their business ties with ICE.

At the same time, numerous companies have refused to do so, choosing to be complicit in the advancement of childhood separation policies because it helps their bottom line. Put simply, they’re turning a handsome profit through immoral activities.

One of these companies is Palantir, which has continued to provide logistical support to ICE despite criticism. Palantir has received over $100 million from ICE data analytics as well as the system that is used to track immigrants within the country. Greyhound Lines, while not making a bunch of money in the process, has freely allowed ICE officers on to their vehicles to challenge passengers. In fact, several people have reported ICE officers boarding buses far from any border and demanding that people produce paperwork proving their U.S. citizenship. Greyhound consents to these searches and, in doing so, is facilitating a blatant abuse of power.

But worst of all are the companies profiting hand-over-foot by actually detaining immigrants. You may have heard of some of them, like Geo Group, CoreCivic and General Dynamics, which provide a bulk of the services and logistical support that facilitates ICE in imprisoning children. These firms are the main beneficiaries of government contracts awarded by ICE.

Here are some better specifics:

GEO Group is a multi-billion dollar company that runs private prisons and controls upwards of 37 percent of the private prison market. The company website professes that they “believe that every human being should be treated with dignity and that his or her basic human rights should be respected and preserved at all times.”

But evidently its employees haven’t all read their mission statement, otherwise they might be concerned about the growing reports of abuse and neglect that have occurred in their facilities, particularly affecting the most vulnerable: children. GEO Group gave generously to Donald Trump’s campaign with a contribution of over $250,000 to his post election inauguration fund. Now, the company is a direct beneficiary of his border policies.

Another company profiting from the violation of human rights in the United States is Corecivic, formerly the Corrections Corporation of America, or CCA. The private prison company appears to specialize in detaining immigrants without a trial. Corecivic controls 42 percent of the private prisons in America, and together with GEO Group it took in over $4 billion last year. The company is meanwhile the subject of numerous complaints and carries a long history of abusing people for profit. Trump again nevertheless accepted the $250,000 that Corecivic gave to his inaugural fund.

Another culprit aiding Trump’s incarceration of immigrant families is General Dynamics. The firm, normally thought of as a defense contractor, has been expanding into other sectors; no longer content to just make weapons, General Dynamics is seeking to increase the $15 billion in government contracts it received in 2017 by diversifying into government services, including those that are now responsible for unconscionable human rights violations. Defense Secretary James Mattis was a former member of the board at General Dynamics, revealing its close connections to the Trump administration. When pressed, Mattis said the military would house immigrant children if it was asked to do so.

So long as the Trump administration and Republicans refuse to change their misguided course on immigration, companies will continue to reap enormous profits at the cost of human dignity and human rights. Rather than being deterred by the public’s disapproval, these firms are ramping up efforts, showing little sign that they will stop voluntarily in their support for illegal detentions.

Remember: the profit motive for these giant companies depends on the continuance of a policy that imprisons children, and they have shown a clear willingness to pressure lawmakers to maintain the horrific family separation policy. ICE officials aren’t the only ones inflicting misery on children and families. The fact is, they couldn’t do it without the support of many people outside the agency, and the implicit corporate support of those who are letting it happen without a fight. 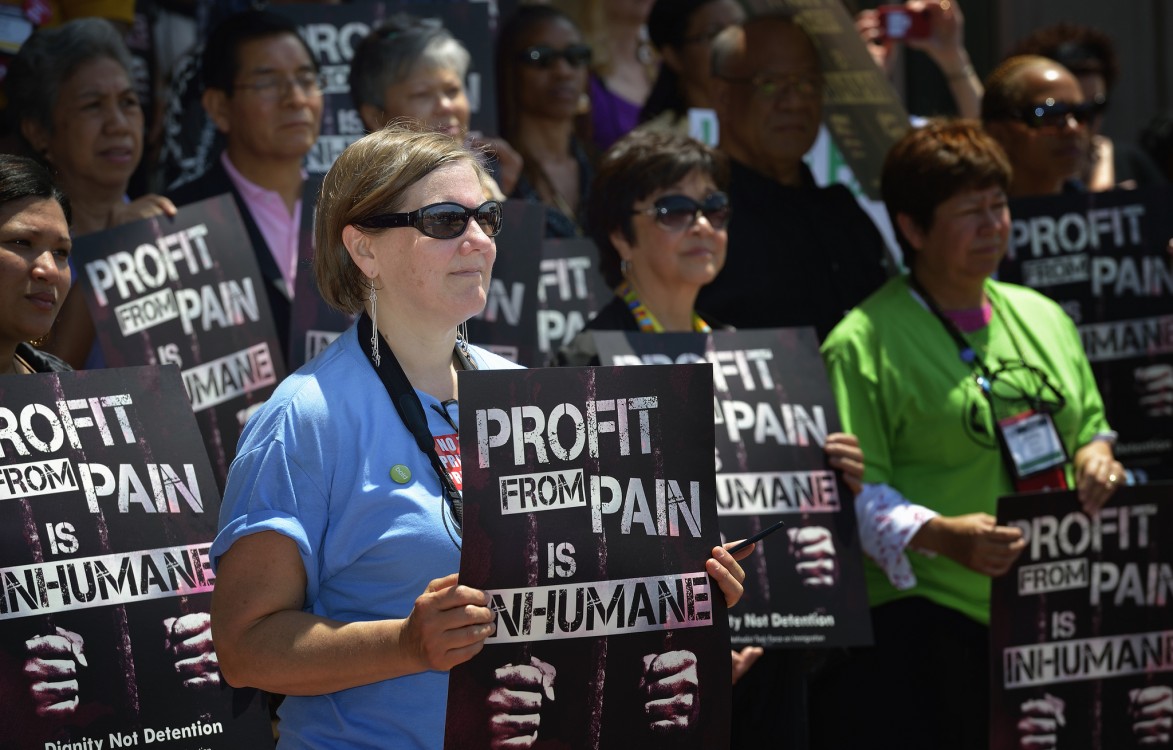