Those of us who study the past, who have chosen to make careers out of explaining the context and long-standing background of issues like police violence against African Americans, often remind our students that history is not about names and dates, not even about Presidents or military leaders, but about the grassroots actions of ordinary people fighting for change. We may struggle to make students understand this point, especially when they might venture into their local bookstores and see the past divided up according to wars and presidential administrations. But that thinking has been passé among historians since at least the 1980s. Now we spend our time researching and writing about ordinary folks whose extraordinary courage and tireless activism led to real and substantial change. In fact, historians are constantly being reminded that wherever we look in the past, ordinary people have always been pressing for change.

Black New Yorker David Ruggles, who spent his young and all-too-brief life battling against police violence in the 1830s, was just one of these ordinary people whose determination led to real change. As his biographer Graham Russell Gao Hodges points out, Ruggles was born in Connecticut in 1810 when the glow of the American Revolution and its fight for freedom and independence was still very powerful. Ruggles’ own parents, who were probably recently freed slaves, were born in the midst of the Revolution and he grew up hearing stories of the bravery of the fighters for liberty, including the mixed-race hero Crispus Attucks. From this early, formative exposure to the rhetoric and ideas of the Revolution, Ruggles understood well the importance of freedom and equality.

As Ruggles’ writings show, his early experiences in the open and free communities in eastern Connecticut, combined with his immersion in the lore of the Revolution, rendered him unable to accept the racism, segregation and abuse that he saw white police officers inflict on Black people in his adopted home of New York City. Though he left behind few private letters, Ruggles was a prolific contributor to newspapers, including his own paper Mirror of Liberty. 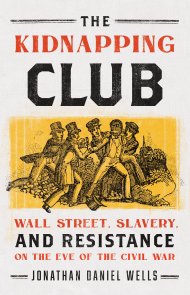 Ruggles set himself up as a one-man army who would combat injustice and inequality in all its forms. When a group of policemen, judges, lawyers and merchants loosely formed a group he labeled “The New York Kidnapping Club,” Ruggles knew that he would need all of his considerable mental and physical abilities to fight the coming contest. That fight would take its toll on Ruggles physically, with his eyesight fading at a prematurely young age, until he was nearly blind by his 30s.

At the apex of the kidnapping club were two members of the New York police force, Tobias Boudinot and Daniel D. Nash. Both had grown up in or near Manhattan and they shared a deep disdain for Black people. Like all members of the police force, Boudinot and Nash were poorly paid, inadequately trained, and largely uneducated. Boudinot in particular was constantly in debt, sued by creditors and desperate for the extra money he could make by capturing runaway enslaved people who had managed, against tremendous odds, to escape southern bondage and forge new lives in New York. The nation’s founding document, the Constitution, required free states to return runaways to southern masters, and Boudinot and Nash were all too willing to comply.

Headed by the ubiquitous police chief Jacob Hays, who seemed to possess a supernatural ability to sniff out criminals, the city’s police force was an ad hoc and more informal organization compared to the modern police. But like today’s police, officers in pre-Civil War Manhattan could demonstrate a shocking disregard for Black lives.

It was all too easy. Boudinot and Nash patrolled the crooked alleyways and dark corners of neighborhoods in Lower Manhattan, and, with the explicit approval of Wall Street financiers and merchants dependent on slave-grown cotton, terrorized the 15,000 or so Black residents who called New York City home in the decades before the Civil War. Seizing Black men, women and children off the streets and arresting them as fugitive slaves who needed to be returned to southern masters, Boudinot and Nash simply needed to haul accused runaways before judges like the city recorder Richard Riker, who would rubber-stamp the claims. Within mere hours, before Black families even knew their loved ones had been arrested, the accused were whisked away to southern slavery. Boudinot, Nash and Riker cared little as to whether they were prosecuting actual runaways or free-born people. There was money to be made and precious little to stand in their way, except for Ruggles.

Ruggles, together with a small cadre of Black and white activists in the New York Committee of Vigilance, protested angrily against the kidnapping of Black people from supposedly free soil. Children were taken even as they sat at their school desks, men who had lived free in New York for decades were arrested as runaways as soon as they stepped from the thresholds of their own homes, and women heading to work as maids were seized and declared fugitives before they knew what hit them. New York was a dangerous and deadly place for Black people even though forerunners of today’s protesters fought kidnappings and police violence tooth and nail.

Ruggles fought against Boudinot, Nash and Riker with everything he had. He tracked down leads like a dogged investigator, started his own newspaper so he could call out the members of the kidnapping club by name and withstood Boudinot’s constant attempts to toss him in jail for interfering with policework. Like police chief Hays, Ruggles seemed to be everywhere at once, furiously objecting to the police-driven terror. And he and his allies won important concessions, including the use of a jury trial in cases of accused runaways so that victims could not be taken quickly and without notice. These reforms helped to thwart the kidnapping club, and it made it harder for the systematic racism of the city police to send Black residents into southern bondage. But the scars were deep and long-lasting.

Ruggles and his fight against the kidnapping club show us that the battles between the police and the Black community stretch back many decades, and that police violence has been part of the DNA of New York and the nation from its earliest days. While the duration of the problem might make it seem insurmountable, it is also possible to take solace in Ruggles’ story. He won important changes like the right to a jury trial, which really did help quell kidnappings. In recent weeks, the protesters demanding justice for African Americans, who have marched through the very Manhattan neighborhoods where Ruggles made his stand, among the towering skyscrapers of Manhattan that are physical symbols of the fact that Wall Street owes much of its wealth and power to the cotton harvested by enslaved people, have proved once again that such a change is possible.