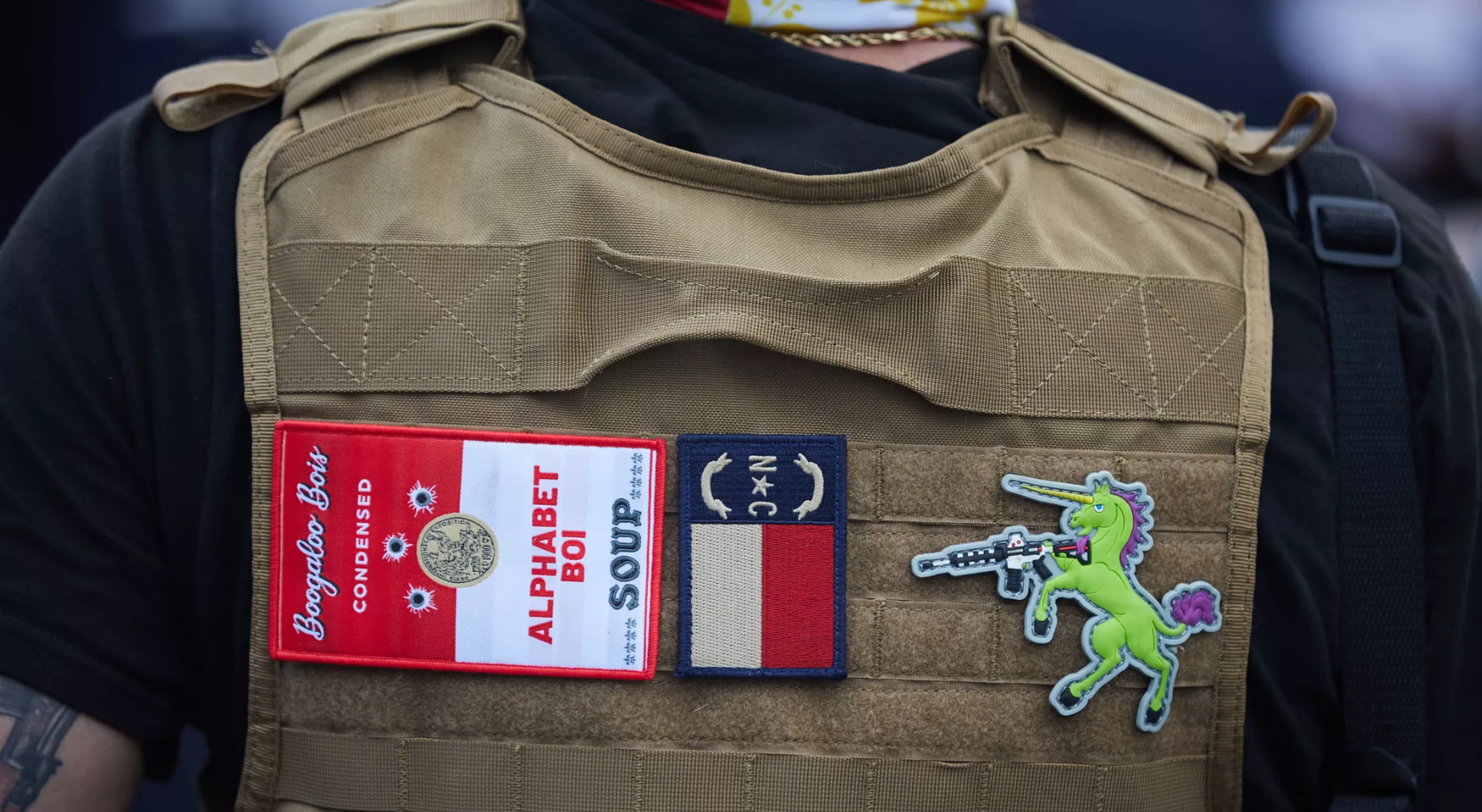 Above photo: A member of the far-right militia, Boogaloo Bois, walks next to protestors demonstrating outside Charlotte Mecklenburg Police Department Metro Division 2 just outside of downtown Charlotte, North Carolina, on May 29, 2020. Logan Cyrus/AFP via Getty Images.

Facebook says further enforcement is planned — but some of the damage is already done.

Lately a question I have been asking myself is: how worried do we need to be about the Boogaloo groups?

The Boogaloo movement, if you’ve been sitting this one out so far, refers to a loosely knit group of right-wing extremists, some of whom advocate for second civil war. (The name derives from the camp classic breakdancing movie Breakin’ 2: Electric Boogaloo. In the delightfully dry phrasing of Wikipedia authors, “2: Electric Boogaloo became a verbal template appended to a topic as a signal of pejorative parody.”)

While the use of the term in this way dates to at least 2012, it has gained new prominence after a series of violent incidents linked to its adherents. An Air Force staff sergeant was charged with the murder of a Federal Protective Service officer and a Santa Cruz sheriff’s sergeant earlier this month, and authorities have said they found paraphernalia connected with the movement in the suspect’s van. And in Las Vegas, three men were indicted “for allegedly conspiring to destroy government and private property during protests in that city on May 30, and for allegedly possessing Molotov cocktails,” the Wall Street Journal reported.

Also of note is where Boogaloo adherents are organizing themselves: social networks, most notably Facebook.

Researchers at the global nonprofit group Avaaz found nearly two dozen Facebook pages affiliated with the “boogaloo” movement, a generally anti-government and anti-law enforcement ideology. Despite the amorphous nature of the online movement, members have become a notable physical presence at both rallies against pandemic shutdowns and more recently Black Lives Matter protests against police brutality.

Posts on pages flagged by Avaaz between May 28 and June 18 included explicit calls for armed violence as well as more borderline content such as anti-government memes employing euphemisms for violence. Some pages also shared misinformation about the protests, such as memes claiming police were placing bricks to cause riots and conspiracy theories about Bill Gates and George Soros. The majority of the pages were created within the past six months and had a collective following of tens of thousands of users.

The fear is that, in an already volatile moment when Americans are confronting a newly resurgent pandemic, record unemployment, and a negligent federal government, extremist sentiments that take root on social networks could boil over into more widespread violence. The question is what steps those networks are prepared to take to stop that from happening.

Why are there so many Boogaloo groups on Facebook and elsewhere? (The movement has also found to be active on Twitter, Discord, and Reddit, among other social sites.) One reason is that what qualifies as Boogaloo is unusually ambiguous. Craig Timberg, Elizabeth Dwoskin and Souad Mekhennet attempted a definition earlier this month in the Post:

These groups have displayed a flexible ideology, espousing gun rights in Richmond in January, opposition to government public health restrictions in several state capitals in March and April and, over the past week, resistance to police brutality against African Americans, though the goal in some cases may be mainly to distract attention from those causes, according to recent research.

Some far-right groups have purposefully sown confusion by impersonating left-wing activists, adding chaos to already turbulent days of protests in which local officials have blamed unnamed outsiders and left-wing groups for the mayhem.

If Boogaloo was a single, defined group with a designated leader and a stated commitment to violently overthrowing the American state, dealing with it would be pretty straightforward: you ban its social accounts and all the posts praising it.

Instead, though, Boogaloo is an unruly collection of ideas. Some, like Second Amendment rights and opposition to shelter-in-place orders, are within mainstream American political discourse. Others, such as militant white supremacy and violence against the state, are not. Still other elements, like some adherents’ support for Black Lives Matter, have confounded researchers over whether they are legitimate or simply meant to distract from the movement’s true aims.

At least two other issues have complicated the act of removing violent Boogaloo posts. One is that many of the posts are deeply ironic in the favored right-wing mode, making it difficult for moderators to determine which posts are credible threats and which are simply “a joke.” The other is that the terminology around Boogaloo has rapidly transformed to include more than 50 terms, with posts connected to the movement using similar-sounding terms such as “big igloo” and “big luau.” (The latter is why some adherents are believed to wear Hawaiian shirts when participating in public demonstrations.) That’s not unique to Boogaloo, of course — street drug names transform in similar ways — but it has made the cat-and-mouse game more difficult.

For the Boogaloo adherents arrested in connection with the Santa Cruz and Las Vegas incidents, their Facebook accounts have been terminated, and so have the groups that they belonged to.

These are all good steps — and yet, as the Post notes, Boogaloo content calling for armed violence can still be found readily on Facebook. Partly this is an internet problem: bringing the world online makes it easier for bad people to find each other and make common cause. And partly it’s a platform problem: recommendation algorithms recruit followers for the bad guys, sometimes even after those algorithms have been tuned to prevent those introductions from being made.

Facebook told me that it is taking a fresh look at its policies related to Boogaloo and that those policies would likely evolve to include additional enforcement. By now it’s clear to me that the company is worried about the escalation of the group’s violent ideology on and off its platforms. And that’s enough for me to be worried, too.