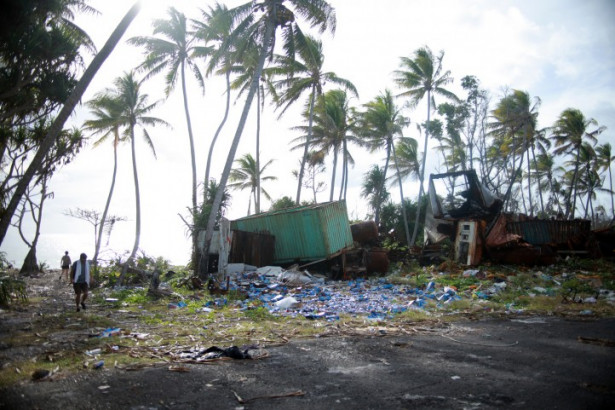 The Brutal Racial Politics Of Climate Change And Pollution

As I watched coverage of Harvey’s flood damage in Houston, Irma’s wreckage in the Caribbean, the devastating record monsoons in South Asia, and the fresh nightmares of Hurricane Maria, I thought back to another place: Charlottesville, where racists openly rallied to their cause—and were later defended by the president.

To explain why, let me point back to one of the least known—yet most outrageous—of the Trump administration’s early policy proposals: the proposed elimination of the Environmental Justice program at the EPA. While the division still exists for now, it has no more grants available for the current fiscal year, and its future is in limbo.

Environmental justice is the principle that people of color and poor people have historically faced greater harm from environmental damage, so special efforts should be made to prioritize their access to clean air and water. The environmental justice program gave small grants to communities struggling with these disparate pollution impacts. Its budget was small—just $6.7 million out of the prior year’s EPA budget of $8 billion, or less than one-tenth of 1 percent.

Clearly, the proposed cut wasn’t about saving money. Instead, it points to a more sinister agenda—especially when paired with other planks of the administration’s environmental platform.

Air pollution is bad for everyone with lungs, but it disproportionately harms people of color and poor people, who are much likelier to live near coal-burning power plants. People living within three miles of coal-fired power plants have a per capita income 15 percent lower than the national average, and African Americans die of asthma at a 172 percent higher rate than white people. Deregulating toxic polluters is only going to worsen such egregious disparities.

Meanwhile in Alaska, Native villages are literally sinking into the sea and facing the loss of their traditional lifestyle as polar ice melts. Yet the federal government proposes eliminating the already meager assistance they receive, and won’t even name the problem they’re confronting. Absurdly, the National Oceanic and Atmospheric Administration (NOAA) now refers to Arctic climate change impacts as “Arctic Change.”

Similar inequalities show up in the places hardest hit during this catastrophic hurricane season.

Refineries and other petrochemical facilities in Houston have been shut down in the wake of Tropical Storm Harvey. However, storm damage at the Exxon refinery in Baytown has led to leaks of toxic chemicals, while the Chevron Phillips refinery in Pasadena reported to regulators that it may release known carcinogens like benzene.

Outside the Chevron Phillips facility, the same pattern plays out: Residents there are 83 percent non-white and 74 percent low-income.

Living near these facilities—and in the storm zone, generally—is dangerous. But for some people, even trying to get away was dangerous. In a horrifying move, the Border Patrol continued to operate checkpoints on highways being used by people evacuating from the hurricane-affected zone, so undocumented immigrants had to choose between risking their lives or getting deported.

While Texas was still reeling, the Caribbean, and then Florida, was struck by Hurricane Irma. The prime minister of Antigua and Barbuda, a sovereign state that’s over 90 percent black, says that 95 percent of the structures on the island of Barbuda have been destroyed.

Americans sometimes forget that the Caribbean includes the U.S. territories of Puerto Rico and the U.S. Virgin Islands. (Though “colonies” would be a more truthful word, since these largely nonwhite islands have no voting representation in Congress.)

More than half the residents of Puerto Rico lost power, and a top utility official has warned that many of them will remain without power for weeks to months. The delay is partly attributable to the poor state of the island’s infrastructure, which hasn’t been maintained over a decade-long recession—one worsened by Washington-imposed austerity policies that prioritize payments to lenders over the well being of Puerto Ricans.

People in the U.S. Virgin Islands, meanwhile—over three-quarters of whom are black—are struggling with major storm damage and power outages, with minimal federal assistance and little coverage from the U.S. media. While federal authorities aren’t providing meaningful assistance to USVI residents, they’ve nonetheless mustered the capacity to block desperate evacuees from other harder-hit islands in the region from reaching the islands.

And before Puerto Ricans and Virgin Islanders had a chance to recover, they’ve been hit by Maria, a second major hurricane, that’s knocked out power for the entire island of Puerto Rico and caused severe structural damage to buildings. The mayor of San Juan expects it will take 4 to 6 months to restore electricity.

The proposed elimination of environmental justice funding, assistance for Native Alaskans, and the U.S. contribution to the Green Climate Fund (which assists poor countries with adapting to the effects of climate change and transitioning to clean energy) all appear calculated to pander to the most racist, nationalist elements of Trump’s base, who don’t want any assistance going to those they consider “undeserving.”

Yet who could be more deserving?

Black Americans are living with (and dying from) asthma caused by particulate pollution from profit-generating power plants. Native Alaskans are losing their homes and traditional lifestyles due to melting ice caused by climate change. Undocumented people had to risk deportation while fleeing a life-threatening disaster.

Globally, Bangladeshis, Indians, and Nepalis are suffering from catastrophic floods that are exacerbated by other people’s greenhouse gas emissions—not least our own, since the U.S. is the largest historical emitter of the carbon now warming the planet. And people in Antigua, Barbuda, the U.S. Virgin Islands, and Puerto Rico just got battered by a powerful hurricane intensified by a warming ocean.

All of these lives are systematically devalued by the powers that be precisely because of entrenched white supremacy—of the implicit kind (evidenced by the decades of foot-dragging by rich countries on the issue of climate change), as well as the brazen kind on display in Charlottesville.

We cannot truly confront the root causes and horrific impacts of climate change without challenging and undoing white supremacy.