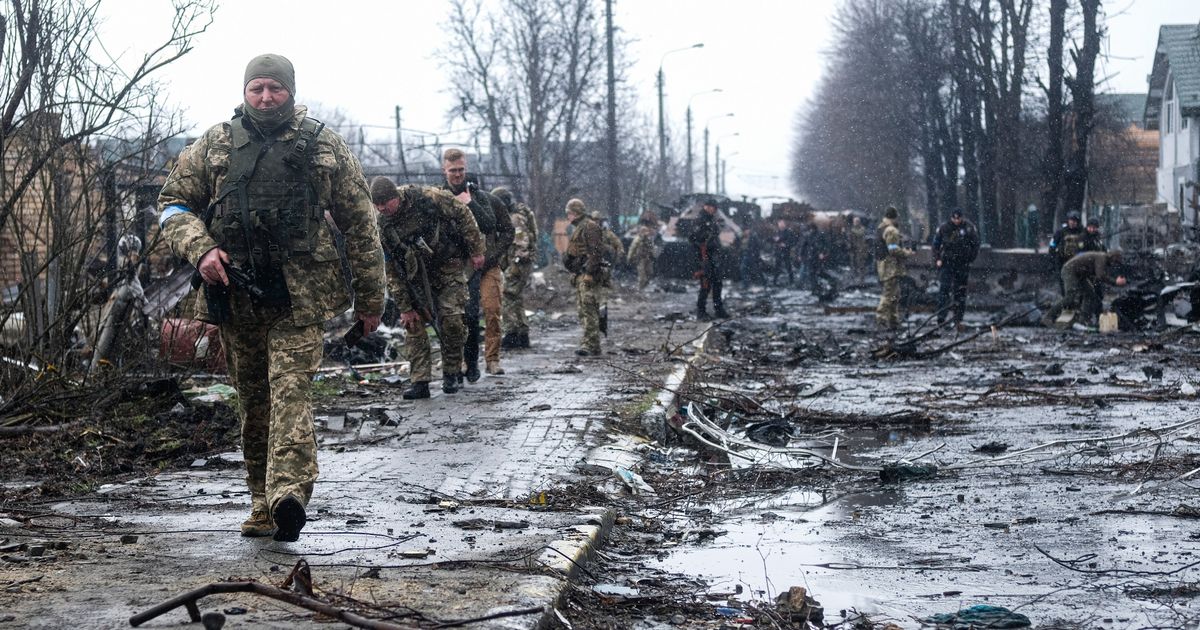 Update: If The Pentagon Can Not Confirm The Bucha Tales, Who Can?

This was the most important one of yesterday’s news items.

WASHINGTON, April 4 (Reuters) – The U.S. military is not in a position to independently confirm Ukrainian accounts of atrocities by Russian forces against civilians in the town of Bucha, …
…
“The Pentagon can’t independently and single handedly confirm that, but we’re also not in any position to refute those claims.”If the Pentagon, which includes the Defense Intelligence Agency and the National Security Agency, could not confirm what the government in Kiev claimed, who else could?

Certainly not the European minions who reacted to those dubious claims by removing more Russian embassy personal from their countries.

The U.S. is again pushing the Europeans into suiciding their economies. The U.S. would of course be the only country that would gain from that.

Its over. The Ukraine has lost the war. Its navy, air force and defense industry no longer exist. The Russia air force is doing hundreds of bombing runs per night eliminating any fuel and ammunition depot that is left in Ukraine.

Without fuel tanks and trucks are immobilized. Without ammunition artillery falls silent. The heavy Ukrainian units along Donbas are now unable to do maneuver warfare. They can not even flee. Replenishment and reserves are unable to reach them. They have the choice of giving up or getting destroyed in place.

Anyone who is still pushing more weapons into Ukraine or tells Kiev to prolong the war is putting more Ukrainian lives at risk for zero potential gain.

The Bucha ‘Russian’ atrocities propaganda onslaught may have worked well in the ‘west’ but it lacks evidence that Russia had anything to do with it.

An indignant Moscow has angrily demanded a United Nations Security Council meeting on Monday over the allegations of atrocities by Russian troops in areas around Kiev through the past month. Prima facie, this allegation is fake news but it can mould misperceptions by the time it gets exposed as disinformation.

A Tass report says: “The Russian Defense Ministry said on Sunday that the Russian Armed Forces had left Bucha, located in the Kiev region, on March 30, while “the evidence of crimes” emerged only four days later, after Ukrainian Security Service officers had arrived in the town. The ministry stressed that on March 31, the town’s Mayor Anatoly Fedoruk had confirmed in a video address that there were no Russian troops in Bucha. However, he did not say a word about civilians shot dead on the street with their hands tied behind their backs.”

Even more surprising is that within minutes of the “breaking news”, western leaders — heads of state, foreign ministers, former politicians — popped up with statements duly kept ready and only based on the videos, seconds-long videos and a clutch of photos, ready to pour accusations. No expert opinion was sought, no forensic work was done, no opportunity given to the accused to be heard.

I had yesterday, at 15:09 UTC, posted a timeline of the events in Bucha on Twitter. Here is an expanded version.

The mayor of Bucha in Kyiv region, Anatoliy Fedoruk, stated that the town had been liberated from Russian troops.

Fedoruk said this in his video address posted on Facebook, Ukrinform reports.

“March 31 will go down in the history of our Bucha community as the Day of Liberation. …”

Scenes of desperation and death as the Russians retreat from suburbs outside Kyiv. – New York Times

Ukrainian soldiers from the Azov battalion walked through the remnants of a Russian military convoy in the recently liberated town of Bucha on Saturday, just outside the capital after the Russians withdrew.

Here are the latest developments in the war in Ukraine. – New York Times, Apr 3

Footage posted by Ukraine’s Defense Ministry and photographs from news agencies showed the bodies of men in civilian clothes on the streets of Bucha, a town northwest of Kyiv. Images showed some corpses with hands bound behind their back.

A screenshot of the original NYT piece was attached to my tweet. It included the sentence:

The New York Times was unable to independently verify the assertions by Ukraine’s Defense Ministry and other officials.

The above tweet went viral with more than 3,000 retweets and nearly 5,000 likes. People obviously recognize the importance of the above timeline for the question of who killed whom, when and how.

Gonzalo Lira, who is in Karkiv, has previously directed a professionally made movie. In this video he asserts that the main ‘Russian’ atrocity video, which shows cars driving down a street strewn with dead bodies, is of a professional high production quality that can only be achieved with high end equipment. He also remarks on additional evidence from the scenes that points to a false flag operation.

Lira comes to the conclusion that the Azov Nazis have killed some people in Bucha that had been too friendly with the Russian ‘occupiers’ and are now blaming Russia for it.

Azov gangs are known for such atrocities. Based on the above timeline I concur with Lira’s conclusion.