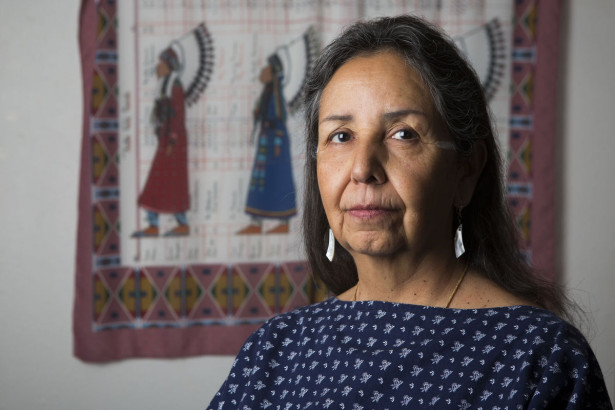 Giraffe Award Given For Courage In Fighting Uranium Mining

Above Photo: Charmaine White Face, an environmental scientist, recently won a Giraffe Award for her efforts to battle corruption and uranium pollution over the last 30 years. Josh Morgan, Journal staff

Note: Popular Resistance has been working with Charmaine White Face since 2013 on the Clean Up the Mines campaign.  Charmaine educated Margaret Flowers and me about the issue and when we understood the extent of the problem, as well as the environmental and health risks it created, we had to get involved. We wrote about what we learned in “America’s Secret Fukushima Poisoning the Bread Basket of the World.” If you are unaware of the problem, we urge you to read the article and review the website and hope you are moved to get involved in this issue. While the country reacted in horror when the people of Flint, Michigan were poisoned by toxic water, as people should, we thought about the reality that many in the Indigenous population have been suffering from toxic water since the 1950s as rivers, wells and aquifers have been poisoned. In addition, radioactive uranium dust is spread across the land poisoning livestock and agricultural land as well as schools and homes. This is a critical but ignored environmental catastrophe. We thank Charmaine White Face for her tireless work in bringing attention to this matter and working to resolve it.  KZ

It takes a lot of courage to stick your neck out, but one Rapid City resident has been dubbed a hero for doing just that.

Charmaine White Face, an Oglala Sioux scientist, environmentalist and activist, has been named a Giraffe Hero by the Giraffe Heroes Project, a nonprofit organization that encourages people to “stick their necks out for the common good.” White Face, who learned of the honor just days before it was announced last Wednesday, was surprised.

“I knew someone had nominated me, but I didn’t expect it,” White Face said. “And I’m glad, but I knew all of the reasons I was nominated, and there’s far more that happened than anyone knows.”

White Face, 69, was chosen for her battles against corruption within tribal governments, as well as her fight against uranium mining in the Black Hills. Her work has been met with threats as well as plaudits: White Face said that the brakes to her car have been cut, and that people have told her to “watch out” or a bomb would be placed in her car.

“That’s why I have mixed feelings about this, because there’s trauma that comes with my work,” White Face said. “I still have residue of that.”

White Face’s fights began in the 1980s as she tried to uncover corruption within the tribal governments. At the time, she was the treasurer of the Oglala Sioux Tribe.

“I saw all of the corruption and misuse of federal money,” White Face said. “Different programs like Head Start and elderly meals programs had money being used to pay people off, and that left people in poverty.”

White Face refused to go along with it, even as she was warned that her family would be in danger. Instead, she got on the radio and television and spoke out about what was happening.

“I want federal programs for health and human services, transportation, whatever, to strongly monitor where the money goes to,” White Face said. “Because that’s taxpayer money. That’s money that you and I pay, and it needs to be used what it’s earmarked for.”

She also has written public commentary (including in the Rapid City Journal) about how public officials did not have the public’s interest at heart. In 1998 she authored the book, “Testimony for the Innocent,” about her experiences as treasurer.

The bad part: Though the FBI and a special committee investigated, no one was charged.

“I saw Tom Daschle on TV saying that no corruption would be found in South Dakota tribes, and I knew nothing was going to happen,” White Face said. “It made me sad, because the people who need these services don’t get them. And it’s still going on. It got bigger. It made the crooks bolder.

But White Face felt that it was still important to try to help people, and in the 2000s, she grew more active, speaking out about the effects of uranium mining in the Black Hills.

“I’m a biologist and a physical scientist,” White Face said. “I’m an environmentalist from way back. I learned about these abandoned uranium mines and the active uranium mines, and I wanted to find out how this was affecting the people.”

It was 2003 when she first started learning the extent of the uranium problems. White Face says that there’s a major radioactive policing problem, with pollutants in the air, water and “probably the food.”

“One thing we’ve found from studies done by the Indian Health Services is that Native Americans in the Northern Plains regions have the highest cancer rates in the country,” White Face said.

White Face said that though there are only 272 abandoned uranium mines in South Dakota, there are over 2,000 in Wyoming, and that because they are open mines, wind scatters radioactive particles. Additionally, active mines like the Crow Butte Uranium Mine in Crawford, Neb., are very concerning to her, as the water nearby has high levels of thorium, a radioactive metal.

The Defenders of the Black Hills, however, is pushing for a bill in Congress to clean up the abandoned mines, and for the EPA to include all radioactive particles in air and water monitoring.

White Face says she has been threatened by uranium companies, but vows that she and the Defenders of the Black Hills will continue to educate people and push for South Dakota and Wyoming congressmen to keep the air and water clean from radioactive particles. She has also suggested that coal miners who have been laid off might be able to get work cleaning up abandoned uranium mines safely.

“Wouldn’t it be great if they could be put to work doing good?” White Face said. “It would help. It would help. I’m old, and I’m not going to be here, but it could help my grandkids and yours. We’re supposed to look out for seven generations following us.”

Despite all of this, White Face is reluctant to call herself an “activist.”

“I have never classified myself that way or called myself that,” White Face said. “I encourage people to get active, though, so sometimes I hear that.”

But White Face maintains that it’s important to keep advocating for justice, even in the face of insurmountable odds, because sometimes it works: in 2003, when a shooting range was going to be built near Bear Butte, White Face and others opposed it, uncovered the misuse of federal money, and stopped the project.

She added: “If they don’t know about it, it’s just going to keep on, you know?”