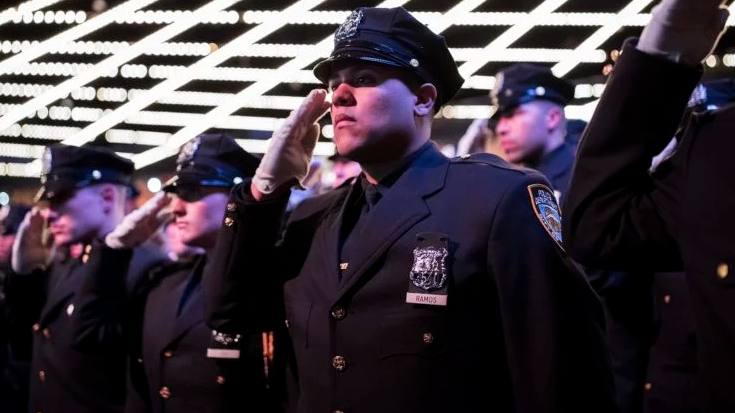 The Case For Delegitimizing The Police

Above Photo: To the assertion that the police simply need to be better trained, we must ask, better trained in what?
Drew Angerer/Getty Images

The institution of policing doesn’t deserve the unquestioned authority and purpose people give it in the United States. Fraud, corruption, and violence are too common for the institution and the systems connected to it to be trusted by default. While the conversation about how unjust “the justice system” in the United States is has gained some headway—especially regarding the racism of mass incarceration, a direct byproduct of discriminatory law enforcement—policing remains woefully legitimate in the hearts and minds of even well-intentioned folks.

Instead of dismantling the institution, advocates will often push for reform measures, such as body cameras, changes in gear, or calls for diversity in hiring. For their part, police defensively advertise themselves by using avenues like social media to post videos intended to be evidence of their positive work in Black communities and with other groups they otherwise have deemed more prone to criminal activities, as if these isolated actions can undo decades of police brutality. Neither of these efforts gets to the root of the issue, and only by doing so can we begin to address these racist practices.

To the assertion that the police simply need to be better trained, we must ask, better trained in what? The history of policing in the United States makes clear the police are in fact trained to discriminately execute, brutalize, and detain people, many of whom haven’t done anything against the law. Once you come to understand the institution’s ties to white supremacy, it becomes clear the system is toxic and cannot be fixed. So instead of spending more time trying to reform the institution, we should focus on delegitimizing police and ramping up well-organized approaches that benefit our communities.

Throughout history, the state has used the police force as a tool to uphold white supremacy. Before the institution was what we know it as today, patrol officers of different forms helped enforce brutality against Native people, fugitive slave laws, the “black codes,” xenophobic policies, and Jim Crow racist segregation. Past to present, the relationship between policing and white supremacy has been deeply intertwined and mutually beneficial, preceding our modern understanding of ideological whiteness itself.

Because whiteness is typically seen as safe and associated with “law and order,” people often look to the police for protection instead of questioning the need for the institution itself. We know that with police, those of us who are most disposable according to white supremacy are at risk of being murdered and incarcerated. Our existence every day is met with the insatiable violence of a system that has fought long and hard to repress us at all costs—a violence the media has downplayed. The media often depicts police brutality as isolated incidents or recent phenomena, instead of connecting the countless acts as part of the normal, established behavior. This violence is depicted in nearly every aspect of popular culture, and not because it’s imaginary; comedians, sitcoms, and music address it regularly in some form because it’s an everyday reality. This daily dread is not worth clinging to out of fear of the unknown, meaning a world without the police.

The police also export their model to nations abroad, training other police on how to better perform their duties through state violence. Some irony may be found in the fact that police abroad are seen as being in need of training on how to do a job police in the United States carry out so brutally themselves.

The brutality we’re used to is not excusable and making that much clear by delegitimizing the police, in our minds and through our calls for change, would benefit us greatly.

We should all begin to actively challenge the assumption that just because we are used to something that means it’s acceptable. The difficulty is that people, even those who are most victimized by policing, often cannot imagine a world without the police. We see this manifesting itself in schools, communities, and at events where those who are most overpoliced gather. It’s not surprising to see people representing communities that have been criminalized calling for more policing as a deterrent to their problems. Maintaining the relationship we have with this abusive entity, providing the police the benefit of the doubt, continues a vicious cycle in which we continue to give the police unearned authority to be violent in our everyday lives.

Since we know police are indoctrinated into a racist, sexist, multilayered oppressive institution, we should also know we’re not going to end their murderousness with wishful thinking. That’s only legitimizing them again by entertaining what needs abolishing. Instead, we as abolitionists should assert that policing is the problem and not lack of training or isolated incidents. In doing so, we’re actively fighting internalization of the institution. This is just as important as external protests like marches, rallies, and other efforts rejecting the status quo.

Some people who want to maintain white supremacy, and others who hesitate out of uncertainty, fear delegitimizing the police would mean the country would be overrun with crime, which Truthoutcontributor Kelly Hayes and organizer Mariame Kaba have addressed, writing:

[T]he idea of “predators” and “dangerous people” is complicated by the conditions our society enforces—social and economic conditions that we know generate crime and despair. Communities whose needs are met are not rife with crimes of desperation, whereas struggling communities are; and people from communities that are highly criminalized by our racist system are far more likely to be thrust into the carceral system.

The United States has been able to position itself as a “world leader” through the slave labor and the criminalization of Blackness. The emancipation of enslaved Africans was actually a shift in how Black people would be subjugated, not a guarantee of any sort of actual liberation.

White supremacy obscures what problems actually are because it has always been dependent on painting “others” (nonwhites) as issues that need to be dealt with. Black people and people of color oppressed by white supremacy have never known true equality that wasn’t dependent on symbolism or tokenistic, representative victories. White supremacy relies on the supposed danger that is life without it to operate and that danger includes policing. Hayes and Kaba also state:

The carceral system has always used sensationalized cases and the specter of unthinkable harm to create new mechanisms of disposability. Those mechanisms are what feed bodies to hungry dungeon economies while we are distracted by our own fears of “bad people” and what they might do if they aren’t contained. Of course, a system that never addresses the “why” behind a harm never actually contains the harm itself. Cages confine people, not the conditions that facilitated their harms or the mentalities that perpetuate violence. Yet, for some reason, even people who are well versed in the dynamics of the system often believe “Law and Order” moments are possible, when, just for a moment, an instrument of state violence can be made good.

If we can work together to tear our communities away from the grips of policing, it will become clearer how the institution is not needed. Organizing around our own ability to solve problems is imperative. When the police are absent and conflict arises, we’re faced with the choice of taking each other’s struggles into our own hands. Every respective community is different, but the people who know their neighborhoods best are well equipped to find a suitable resolution. As Hayes and Kaba explained in their Truthout piece, “Questions like, ‘what about the really dangerous people?’ are not questions a prison abolitionist must answer in order to insist the prison industrial complex must be undone. These are questions we must collectively answer, even as we trouble the very notion of ‘dangerousness.’” This approach isn’t any riskier than policing; our society just hasn’t invested enough into alternatives to policing to give ourselves a chance to build a system that centers the needs of our communities.

To build momentum, we have to work toward a society that doesn’t accept problems like poverty or lack of health care. White supremacy intentionally disadvantages communities that aren’t white and makes maltreatment a standard. As a result, certain communities suffer problems from lack of resources affecting every aspect of their well-being, from their environment to the conditions that reinforce generational poverty. We can’t say a world without police wouldn’t work when the places that supposedly “need” police have never received adequate resources to thrive. To be police-free, we have to make equality something more than just an idea.

Police exercise and carry out the state-sponsored violence of white supremacy. It’s for this reason the state finds it necessary to unflinchingly defend the police. The Senate’s “Protect and Serve Act of 2018” is just the latest example of how this sort of brutality is defended through legislation. The bill, which is modeled after hate crime legislation, would make it a crime to intentionally target a law enforcement officer based on their “actual or perceived status” as one. It’s fixing a problem that doesn’t exist for a fight that’s not taking place. The work of law in this sense is a reinforcing tool to be used to bolster the power of the police, and that’s exactly why the police enforce “the law.”

While the police kill hundreds of people annually, they are made into victims supposedly under threat. Those who were murdered are reduced to necessary removals, losses, and accidents.

There’s nothing redeemable about what’s only poison at its core. When the police expose their ruthlessness, it’s because tyranny is the basis of the white supremacist ideals this system is founded on; there is no fair bigotry. There’s no point in consistently needing to let the police dictate to us that their oppressiveness is worthy of patience. Well over a century of time has showed us the institution of policing updates itself to carry out the same acts of destruction in our communities. Though things may certainly look different today, the results are far too often just the same.

The falsehood that police are deterring crime while they freely cause harm has gone on for far too long. If we don’t delegitimize the police, we’re risking our own demise.