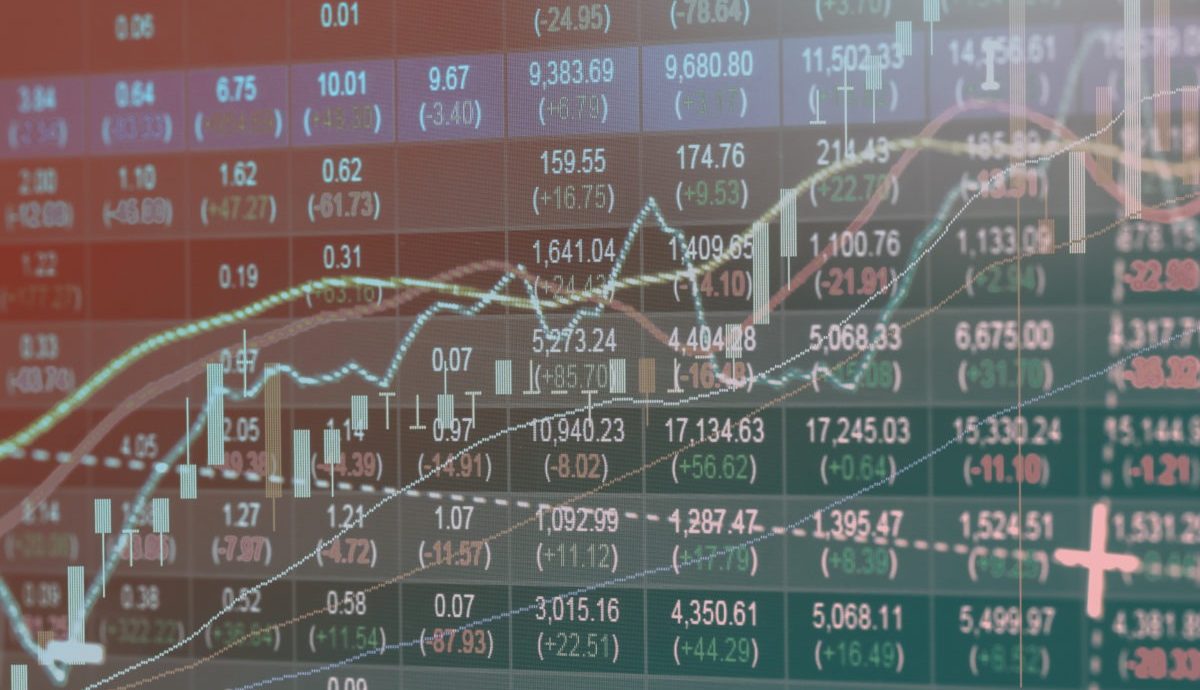 The Case For The Financial Transaction Tax

For most Americans, what threatens health also threatens wealth. The COVID-19 pandemic triggered the worst economic crisis in nearly a century, with millions suddenly facing hunger, unemployment, or eviction. But Wall Street doesn’t represent most Americans. In the parallel universe of the financial industry, stock indices soared to historic peaks as Americans wished good riddance to the deadliest year in our history. Detached from the daily lives of most Americans, the stock market surge almost exclusively benefited the disproportionately wealthy, and the pandemic once again lived up to its distinction as “the great clarifier.”

For years, Wall Street has been increasingly out of touch with the underlying economy of workers, jobs, and wages, and the fortunes reaped by hedge funds and billionaires have not helped the millions of Americans in dire need. It is a fundamental imbalance that can change only with a suite of corrective actions. To start, Congress should immediately pass the Wall Street Tax Act, which would tax the sort of high-speed trading that has turned the financial sector into a casino at the expense of our communities.

This type of tax, known as a Financial Transaction Tax (FTT), is designed to discourage economically useless speculation, progressively raise hundreds of billions of dollars for social and economic investments, and help transition to a more equitable tax system in the United States. An FTT would ensure that high-volume stock market transactions would curb, rather than reinforce inequality, and return needed resources to support vulnerable families.

A Financial Transaction Tax is a small tax applied every time a financial asset is sold, the same way that we all pay a small tax when we buy a t-shirt or a haircut. These assets might include stocks, bonds, or derivatives, but the type of asset is only one factor in determining when the tax applies. Today, the FTT targets a practice known as High Frequency Trading (HFT), which relies on complex algorithms to execute a slew of transactions in milliseconds, turning tiny changes in price into huge profits. As Andrew Ross Sorkin pointed out in a recent column, this type of trading makes “a mockery of the idea of actual investing” while giving Wall Street firms unique advantages over retail investors. Rather than channel funds for investment back to American corporations, HFT further enriches the wealthy while creating risks of market volatility.

FTTs are common around the globe and even have a long history in the United States. There was an FTT in place for much of the twentieth century, from 1914 to 1965, during a period of great expansion of capital markets. New York imposed a similar tax as recently as the 1980s. Several of the world’s other advanced capital markets have an FTT, including France, Italy, the UK, and Hong Kong. Even today, the Securities and Exchange Commission (SEC) continues to fund its own operations through a small tax on transactions, thus providing a successful model on which to build.

A few proposals on FTTs have been put forward recently. The Wall Street Tax Act was introduced in the House of Representatives last month by Rep. Peter Defazio, and would place a tax of 0.1 percent on sales of stocks, bonds, and derivatives—the equivalent of ten cents per $100 sold. Other proposals vary the specific rates paid on different financial instruments, though all contemporary proposals would apply the tax across all financial instruments. In the Senate, Bernie Sanders’s Inclusive Prosperity Act would place a 50 basis points tax on securities, 10 basis points on bonds, and five on derivatives (equal to $5 for a $1,000 stock; $1 per $1,000 bond and five cents for derivatives where the underlying value is $1,000). Another proposal by former Treasury Department official Antonio Weiss and Emily Kawano in a Brookings Institute paper calls for a 10 basis point tax on all financial instruments, phased in over time.

A Financial Transaction Tax is progressive

A cornerstone of modern tax policy is the principle of progressive taxation, which is concerned not only with how to raise revenue, but how to raise revenue equitably. A progressive tax structures the burden according to ability to pay. For example, the income tax in the U.S. is progressive because those with higher incomes pay a higher tax rate. Some excise taxes, however, like the tax on cigarettes, are technically regressive because low-income individuals smoke at nearly twice the rate of others and therefore bear more of the cost in proportion to their income. FTTs are progressive for the opposite reason. The overwhelming majority of equities in the U.S. are held by wealthy families. 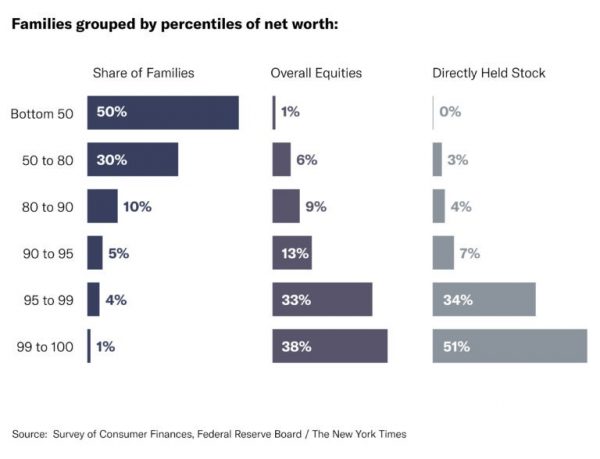 According to the Federal Reserve Board, the top 10% of households in terms of net worth own over 80% of overall equities, a broad measure that includes the value of pension holdings. By contrast, the bottom 50% own only 7% of overall equities. The distribution is even more lopsided when looking at directly-held stocks, which are more likely to be traded at the volume and frequency that FTTs are designed to address. Any debate around an FTT should begin with this fundamental imbalance in what the stock market means to the vast majority of families.

Importantly, the majority of such assets are owned by white households. Only a third of Black households own any stocks at all, whereas the ownership rate for white households is over 60%. This divide compounds the racial gap in nearly every other measure of economic stability—wage income, debt, residential home and business equity, cash accounts, etc.—with Black households largely locked out of the roughly 260% returns over the last decade for S&P 500 funds. In terms of overall value, Black and Latinx households own only 1% and 0.4% in corporate equity, respectively. 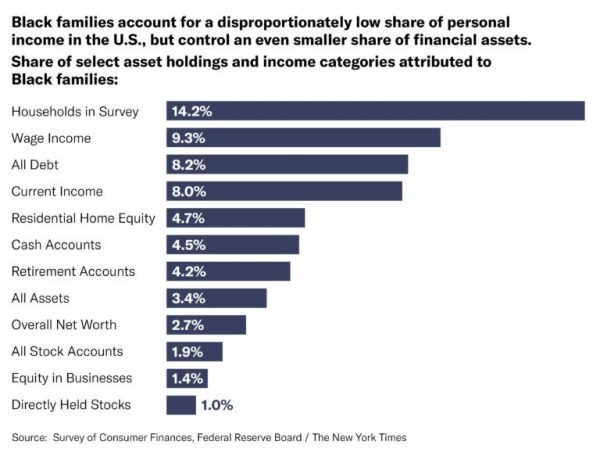 For middle-class households holding financial assets for the long-term, the tax would have a negligible effect, as it only applies as trades take place. Given the concentration of financial assets in the hands of the wealthiest households, it is clear that the FTT is progressive in its impact. It would also make up some of the lost revenue from the declining taxation of capital gains.

Useless speculation vs. the real economy

This concentration of assets has implications for how frequently different groups trade their holdings, which matters in terms of who would pay the tax. There are important distinctions between the high-frequency traders (HFTs), who would be most impacted by the FTT, and middle-class investors whose retirement security is held for decades in mutual funds.

HFTs are now estimated to make up half of market trading volumes, executed by algorithms seeking to exploit miniscule differences in prices. Because the FTT would be applied per transaction, it would decrease the frequency of HFT and thus its profitability. However, this may be a desirable result, as excess volatility and speculative activity do not serve the actual function of the financial system, which is to provide support for innovation in the goods and services sectors of the economy.

An FTT could play an important role in restricting the excessive trading that is designed to manipulate the markets instead of benefiting the overall economy. Over the past forty years, the U.S. economy has transitioned towards a financialized economy, meaning that the financial sector has grown, and non-financial corporations have come to rely more on financial activities rather than productive innovation. This has reversed the traditional understanding that the financial sector serves the needs of the goods and services economy, providing credit to businesses and households, facilitating savings and intermediation, and supporting equity issuances for publicly-traded corporations. As the financial sector was deregulated in the 1990s, it grew both as a percentage of GDP and as a locus of increased speculative activity. This transition resulted not only in the 2007 Great Recession, but more deeply in the ongoing focus by large non-financial companies—the major employers in the United States—on maximizing shareholder value and on secondary market trading that seeks to create wealth through speculation rather than through share price increases tied to actual productive improvements in certain companies.

Reducing speculation can redirect the financial markets toward sound investments in the real economy and even the transition to decarbonization. Economists Pollin, Heintz, and Herndon show that the ratio between stock market trading and productive investment by non-financial corporations has increased 18-fold, which strongly suggests that reducing the volume of high-frequency trading on the stock markets would have negligible impact on actual productivity in the goods and services-producing economy.

A Financial Transaction Tax would raise revenue for real priorities

Exactly how much revenue the FTT could raise is a challenge to estimate, because it depends both on the impact of trading volume from the tax (known to economists as the elasticity response), as well as the changing overall transaction costs per trade. Even though an FTT would increase transaction costs, these costs have been falling in recent years, and an FTT would only restore total transaction costs to the level they were a few decades back, when financial market trading was still robust.

Given the uncertainty, economists have proposed a wide range of how an FTT would impact overall market transactions and thus the amount of revenue that the FTT would produce. Recent estimates range from approximately $500 billion over ten years to $2 trillion. According to the Congressional Budget Office, a tax of 0.1% on financial transactions, as proposed by the Wall Street Tax Act, would generate $777 billion in new revenue over the next decade.

Pollin, Heintz, and Herndon analyzed the 2015 version of Sanders’s Inclusive Prosperity Act and “concluded conservatively” that an FTT would raise an additional $220 billion annually, even accounting for a projected 50% decline in trading volume and some tax avoidance. To put that estimate in context, $220 billion annually is enough to effectively end homelessness in the U.S. ($20 billion), wipe out all outstanding medical debt ($81 billion), and create a universal child care program ($70 billion) that would ensure 12 million children receive affordable care—and still have well over $100 billion left over.

The ultimate value of a tax is not only in the revenue it raises, but also in the incentives it creates. The FTT is urgently needed because of this dual impact: it will equitably raise revenue that can be used to support economic recovery and social goods while discouraging financial roulette that rewards speculation rather than jobs and wages.

Our economy needs a well-functioning financial sector. As the Nobel-prize winning economist Joseph Stiglitz has noted, our current financial system has failed at fundamental tasks such as managing risk, efficiently allocating capital, and providing funds for productive investments and job creation. Our tax system is one of many tools that can be used to disincentivize the pursuit of short-term profits over long-term stability and equity, and better align our financial sector to support the public good. Congress should not hesitate to use it.