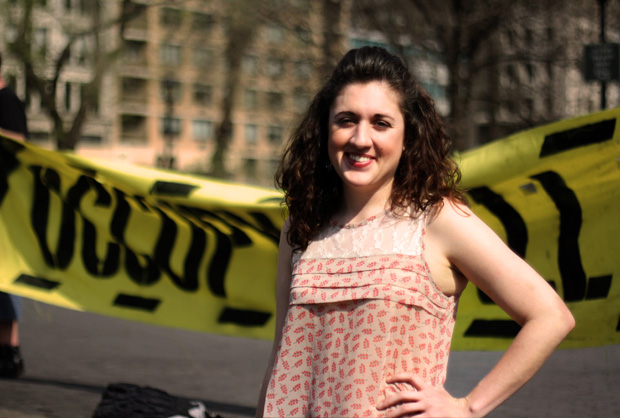 The Case That Could Rock the Occupy Movement

Cecily McMillan doesn’t appear to be a violent insurrectionist. On the contrary, the cheerful 25-year-old New School for Social Research graduate student is well known among Occupy Wall Street activists for preaching non-violence.

But on April 7 she will step into a lower Manhattan courtroom, accused of assaulting an NYPD officer during an OWS demonstration. She faces up to seven years in jail.

The police say McMillan elbowed Officer Grantley Bovell in the face on March 17, 2012. OWS activists had gathered in Zuccotti Park (the OWS encampments there were evicted the previous November) and the police started to make arrests. McMillan claims that while leaving the park her right breast was grabbed from behind and she instinctively reacted. She was arrested, beaten, and later hospitalized after going into a seizure (she was released without bail, although prosecutors sought a $20,000 bail). McMillan had bruises and cuts on her back, shoulders, head, and right breast.

Her attorney, Martin Stolar, is confident that the prosecution can’t prove intent beyond a reasonable doubt, but he has an uphill battle. The judge, Ronald Zweibel, refused to unseal Bovell’s internal police file. Bovell has previously been accused of using excessive force on the job and he was party to a massive ticket-fixing scandal in the Bronx, but the judge sided with an NYPD attorney who argued that the cop’s internal record had no direct bearing on McMillan’s case.

Beyond the threat of a seemingly law-abiding social justice protester doing hard time, the case is of great significance to New York City activists. According to Stolar, 90 percent of OWS charges have been reduced to misdemeanors or have been dismissed. A guilty verdict, then, in this case allows the critics of OWS to paint movements preaching economic equality as something other than non-violent. “It sends a chilling message to those who are engaged in non-violent protests,” Stolar told VICE News. “It says, ‘Watch out. You could be snatched up and sent to jail for a long time.’”

[pullquote]’For her to say, “Tonight I’m going to slug a cop,” it’s totally in conflict with who she is.'[/pullquote]

OWS activist Shawn Schrader (aka Shawn Carrié), who was arrested and hospitalized at the same time as McMillan and received an $82,000 settlement from the city, thinks the police are already winning that battle. “The fact that it’s even in the discourse, you go to a protest you might get arrested or get your butt kicked, is chilling in and of itself,” he told VICE News.

Indeed, various legal groups have documented routine use of violence by the NYPD against OWS members.

McMillan declined the prosecutor’s offer to plead guilty to a lower felony charge and avoid jail time, because she refused to say on the record that she acted violently against a police officer.

“She’s a very strong believer in the principles she stands for,” Stolar said. “For her to say, ‘Tonight I’m going to slug a cop,’ it’s totally in conflict with who she is.”

Schrader reflected on McMillan’s stature in the OWS movement, saying: “A lot of people were really angry with the police, but Cecily is one of those people who always took the argument that cops are working class people who are taking orders. She was the most steadfast advocate for non-violence in OWS.”

The zealousness of the prosecution is largely seen as an attempt by Manhattan District Attorney Cyrus Vance Jr. to solidify his reputation, which is enduring criticism in his first term, and to smooth relations between his office and the NYPD. His election war chest receives hefty funding from Wall Street.

McMillan’s supporters further complain that delays in the legal process have put her in a state of limbo for more than two years. Schrader believes that even if she is acquitted the ordeal has taken an irreversible toll. “For me it was really exhausting to wait just for a settlement, the mental exhaustion for waiting to feel like you’ve been vindicated, and I didn’t even get charged,” he said. “She wants to get justice for herself and she won’t even feel like she’ll have justice for another two years for her to sue. I think she fully intends to take her lawsuit not to a settlement but to a trial. Justice delayed is justice denied.”