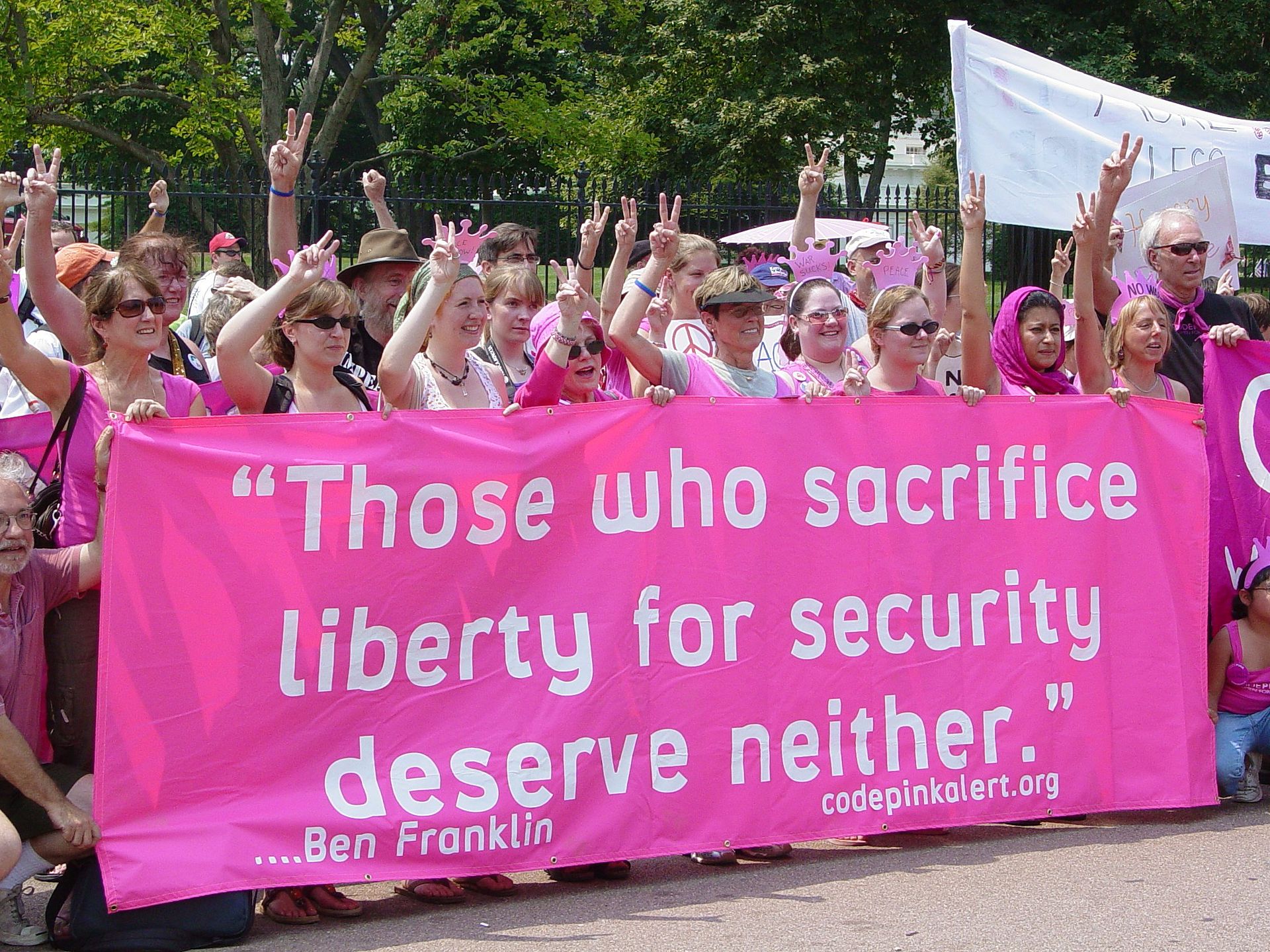 The Climate Justice Movement Must Be Anti-War

Above Photo: Code Pink activists demonstrate in front of the White House on July 4, 2006.

No matter your specific organizational or ideological affiliation, anyone who cares about climate change today ought to understand the critical connections between war, imperialism, and the climate crisis. In the 21st century, where conflicts between the world’s rich and powerful are often waged via the lives of the poor, we have to look at the human and environmental impacts of war and refuse any claims that war is ever a necessary evil.

We’ve seen again in recent months how the United States and other powerful nations use military power to gain control over resources, particularly oil, and capital. While issues such as Russia’s invasion of Ukraine are incredibly nuanced, with much blame to go around for both Putin and NATO’s aggression over time, it is important to remember that those who suffer in times of war are poor and working-class people.

To usher in a new climate future where all people have access to the resources and support necessary to survive and thrive, and where no one has the power to use others as pawns in militant games, we must put an end to war and imperialism everywhere.

PSN spoke with three organizers across two generations who are committed to ending war and imperialism in our lifetime. They shared their thoughts with us about the connections between war, imperialism, and the climate crisis as well as lessons gleaned from their time as anti-war organizers. Their insights are crucial for understanding why the youth climate justice movement must also be anti-war and anti-imperialist.

Most climate activists today can recite a list of facts and numbers on climate change’s biggest drivers, key components being natural resource extraction and the disruption of biodiversity and Indigenous lifeways. Each organizer we talked to placed the U.S. military towards the top of their list of guilty parties, noting that it consumes more liquid fuels and emits more CO2e than dozens of small countries – making it one of the biggest polluters in the world.

These facts alone should be enough to get people to understand that climate justice has to be anti-militarism/war and that our military and the Pentagon need massive budget cuts.

The environmental impact doesn’t just come from military vehicle emissions either.  The complex upkeep of global U.S. military operations requires multiple avenues of extraction, degradation, and control. The U.S. empire’s modern iteration as a “pointillist empire” means that the U.S. strong-arms its way into controlling small areas of land across the globe to carry out its military operations wherever it pleases, oftentimes using economic and militant force.

The maintenance of U.S. military bases, a means through which the U.S. imposes its will on the global south, emits an highly unsustainable amount of carbon in the atmosphere . . . In addition, the machinations of U.S. empire accelerate the climate crisis. The U.S., along with other Western nations, engages in imperialism in order to enrich itself through the extraction of value from the global south. This results in deforestation, habitat loss, and the destabilization of entire ecosystems.

– Rushi, a journalism and political science student who is involved with CODEPINK’s youth cohort, the Peace Collective. She is involved in climate justice and anti-imperialist movement work on campus.

The direct environmental impacts of global military operations carried out by just one nation are enormous, and these impacts only get worse when we include other nations’ military operations as well. The monstrous impacts of militarism don’t end with pollutants and extraction. The Black, Indigenous, and poor peoples of the world usually bear the brunt of U.S. military violence abroad. Noor Mir reflects on the toll that military violence has on communities and community knowledge.

I think a lot about who bombs target and whose land is seen as disposable. Sometimes all we see on the news is when a bomb hits a city. But the truth is that we forget about communities in rural areas around the world that are primarily poor and working-class farmers, mill and factory workers, whose livelihoods really are destroyed, and whose stories never make the news. We’re talking about centuries of farming practices, families with livestock and small dairy farms who have so much to teach us about how to live and grow and eat sustainably. One of the stories that is seared in my mind is one of a grandmother who was picking okra on her farm when a drone strike hit. She was killed. Her family must have lost so much wisdom in that moment, wisdom that we need to combat capitalism and extraction and overproduction. I think about that a lot.

– Noor Mir, a D.C. based organizer and strategist with the consulting firm DC Action Lab. She’s currently supporting Black, AMEMSA and Nepali migrants in their fight for citizenship with wearecusp.org, working with Palestinian advocates on their campaign strategies and building up networks to resist government surveillance.

Colonialism is an ongoing project that actively threatens sustainable, ancestral Indigenous lifeways and knowledge of being in good relation with the land. This, too, is climate justice and anti-imperialism – the understanding that there are real people and environments on the other side of the military operations who are harmed in complex ways by the military-industrial complex.

Back home, the U.S. government works hard to make us forget about the lives on the other side of military operations. Through its relationships with Hollywood and the media, the military works to normalize war and terror in media, creating narratives of benevolence around U.S. involvement abroad. They also work hard to crush domestic dissent through propaganda, policing, and more. Together these tactics work to dispel the truth about the military’s contributions to the climate crisis and human rights abuses.

Despite the laundry list of warmongering tactics deployed by the military, war has never been universally accepted by those of us living in the U.S. In reality, there have been people who have fought against it tooth and nail and pushed us to imagine a world without war. Rushi offers the reminder that “working-class people are overwhelming[ly] receptive, if not already in agreement, with anti-war stances, simply because our views are the most beneficial to the most number of people.” The global war on the poor unites many of us against war, everywhere. There is a powerful lineage of anti-war organizing in the U.S. that seeks to end war and imperialism everywhere, disrupt U.S. global economic domination, and roll back the military-industrial complex.

Noor Mir reflected on how even a decade ago, being staunchly internationalist and anti-war wasn’t always a popular stance even in movement spaces: “It’s amazing to me to see how sharp and centered the politics of young anti-war leftists are today.” Gen Z-ers entering anti-war organizing today are in many ways entering an entirely different playing field both in terms of the scale of global terror they’re up against and the tools available for fighting back. “Now with tools such as social media and the Internet, my generation is speaking up and exposing the truths of this country . . . [their ubiquity] has allowed people to read, understand, and be angry with the issues going on in this world and within our country, motivating them to fight for change,” says Samir.

At the same time, opposing war can also be a very dangerous stance to take, and the revolutionary ideals of anti-war movements are being co-opted by governments almost faster than they can form and take shape. “The revolutionary potential of past generations (such as those that led protests against the U.S. invasion of countries such as Vietnam or Iraq) has been scrubbed by the ruling class. Many communist, internationalist leaders of past generations were disappeared, incarcerated, or even killed,” shares Rushi. We’ve all at some point seen just a few grisly admissions of U.S. terror tactics against its enemies domestically and abroad, but we’ve hardly scratched the surface of what the government and military have done for our “safety and security.” When it comes to war, there are no heroes or winners no matter what elected officials tell us. There are only losers – the majority, the global poor, those who lose their lives and livelihoods.

There are very real challenges to organizing for peace, and these organizers offer us a few words on sustaining ourselves and the anti-war movement at large.

“Individualism only contributes to exhaustion and slows us down,” says Noor. Her advice to folks wanting to get organized today is to do so in community, leaning on each other for support and to prevent burnout.

Similarly, Rushi leans on revolutionary optimism or the belief that only through pushing back against nihilism and engaging in collective struggle does a better future become possible and even tangible. By leaning on their organizing communities for support and motivation, both Rushi and Samir have managed to sustain themselves and help build a powerful peace movement.

As those living in one of the most powerful nations in the world, our responsibility to our peers abroad is to campaign for a world free of war and imperialism. Lean into anti-imperialist study, get organized, and follow Power Shift Network for more info on how to plug into the youth climate justice movement.