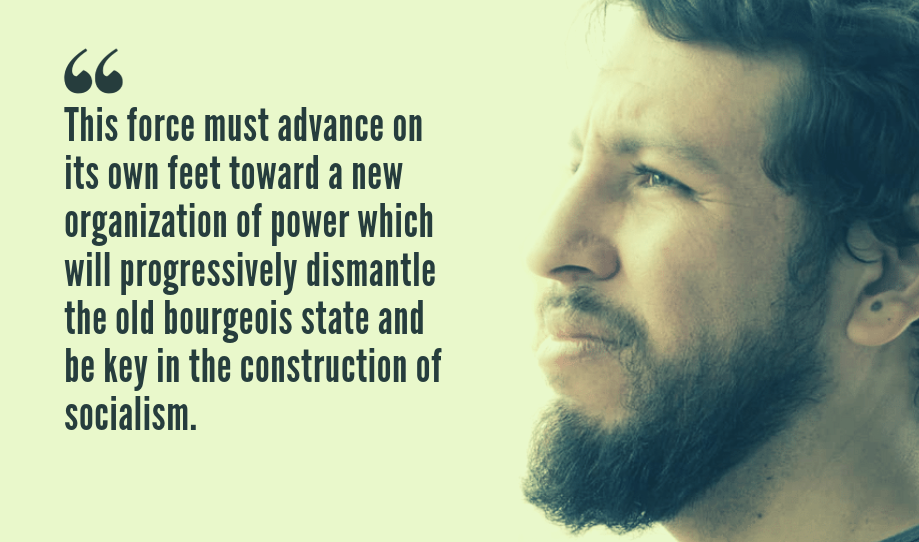 A Conversation with Juan Lenzo.

A grassroots organization is re-politicizing and reactivating communal initiatives.

The Communard Union is a grassroots organization that has set communal society its strategic horizon. For two years the Union has been working throughout the country in a heroic effort to re-politicize and reactivate Venezuelan communes and related projects. In this interview, we talk to Juan “Juancho” Lenzo. He is a co-founder of Tatuy Televisión, a media project that is committed to the Chavista grassroots movement, and the Communard Union’s communications coordinator.

Chávez said that socialist projects (public factories, communes, etc.) must coordinate with each other. He said that they shouldn’t be socialist “islands” in a capitalist ocean, because that way they would only be “swallowed by the sea.” Talk to us about the Communard Union as an effort to bring closer and connect the various communal initiatives. How did the project come to exist and who participates in it?

Since 2019, several Venezuelan organizations that were weathering the storm of the crisis began to meet and sound each other out. In doing so, they were motivated by the need to survive in the face of the crisis, but they were also concerned with the [capitalist] restoration that was being imposed by some sectors of the government. Thus began a process of building a shared platform around a common program of struggle.

The Communard Union initiative took shape when these organizations were reflecting on the commune as a strategic project. The final proposal came out of a meeting held at the Che Guevara Commune in Mérida State in December 2019, with the participation of several communes, including Luisa Cáceres de Arismendi from Anzoátegui, El Maizal from Lara-Portuguesa, 5 de Marzo from Caracas, Sectores Unidos from Lara, and Pancha Vásquez from Apure. They did this together with organizations such as Frente Cultural de Izquierda and Tatuy.

Inspired by Chávez’s ideas, the Communard Union was born as a space to link up communal efforts in a large national organization that would allow us to break with mere localism, overcoming the isolation of the different Venezuelan grassroots projects. In this way, the Communard Union seeks to create an integrated project with a nationwide vision and with a plan to transform the country.

Currently, more than twenty projects from different regions are being integrated into the Communard Union. This is being done by the Argelia Laya Brigade, which promotes the connections in organization, exchange, production, communication, and integral defense of the territories.

The Communard Union brings together much of grassroots Chavismo – those who, in the words of Ángel Prado, “refuse to kneel before the oligarchy and reformism.” The Union is both rebellious and constructive: in the face of capitalist restoration, it aims to advance and not retreat. Talk to us about this dialectic between generalized capitalist restoration (due to the crisis of the model of accumulation, the sanctions, and reformist tendencies within the government) and the communal offensive from below and with the people.

Chavismo is a heterogeneous, broad, diverse, and sometimes contradictory movement that cannot be reduced to the government or the ruling party [PSUV]. Though diverse, there are broad sectors of popular Chavismo that oppose imperialist aggression, but dissent from the way the process has drifted away from its origins: they understand the current official tendency as having abandoned Chávez’s project. This perception is reinforced by the direct attacks, insults, and aggressions that the popular movement has received from sectors of the bureaucracy.

In view of this situation, the most conscious and organized sectors of popular Chavismo are not only questioning the course of things, but they are also working to accumulate forces and go forward in a way that will allow for the continuity of Chávez’s legacy. Thus, we could say that there are two battlefronts: one against imperialism, the oligarchy, and the bourgeoisie, and another one against the reformist sectors that have been burying the Bolivarian project from within.

The Union’s reasoning is to reject any possibility of tactical retreat: doing so would weaken our position of defense and resistance against imperialism. It would also facilitate rapid capitalist restoration, which is advancing to the detriment of the popular and working-class sectors in Venezuela.

So the Communard Union proposes that the Bolivarian Process should continue advancing towards socialism, even from our imperfect and difficult present?

Despite the current difficulties, deviations and setbacks, we are convinced that socialism remains the strategic horizon of the Bolivarian Revolution. As Chavistas, we are willing to contribute all our efforts, all our living force, to constructing a socialist future.

The communal project has what we need to insist on our path toward socialism: territory, popular organization, social property of the means of production, revolutionary conscience, and the will to transform society.

What is the Communard Union’s attitude toward power? Is it a social movement? A space of resistance? Does it have a strategic political vision for the country?

The communes are in themselves spaces of power, exercised with a greater or lesser force depending on each case. In projects such as El Maizal Commune, the exercise of power in the territory is very similar to the forms of dual power that operated in past revolutions. Thanks to its rebellious communards, El Maizal has been accumulating forces that work to control the territory and the means of production. It has made advances in popular organization and symbolic power, and can challenge the government’s jurisdiction in some areas. And thus El Maizal, as a self-governed space, has become a force within the township of Simón Planas [Lara state], with frequent clashes and open contradictions with constituted power in the territory.

These kinds of experiences help us clarify the Communard Union’s vision: it is urgent to build something visible on a national level that will demonstrate the viability, relevance, and necessity of the exercise of power by and for the people. That is why the tactic of dual power is relevant to the Communard Union.

Communards must build their own space of power, which should be autonomous from constituted power, not subordinated to the governing party. It should be independent of ministries, governorships, and mayoral offices. Chávez emphasized this time and again. This force must advance on its own feet towards a new organization of power at a national scale which will, in turn, progressively dismantle the old bourgeois state and be key in the construction of socialism.

Let’s talk about the Argelia Laya Brigade, which traveled on behalf of the Communard Union throughout the country. What are its objectives? Who participates in the Brigade? How does it move around? What do they eat and where do they sleep?

The Argelia Laya Brigade was developed to reconnect the pueblo involved in communal projects and to accompany their struggles and battles. We have been visiting communal organizations throughout the country since 2019, seeing with our own eyes and touching with our own hands these initiatives, while encouraging them to come together as a single force under the Communard Union umbrella.

The Brigade has allowed us to learn about and explore the reality on the ground. Since April 2021, we are focusing on strengthening grassroots organization and reactivating and consolidating organizational, productive, formative, and communicational work.

Growing in numbers is of no use for the Communard Union if we don’t also foster the qualitative development of its communes. We do not want to become a bureaucratic organization that adds “paper communes” [communes that are legally recognized but that have no real work]. We want to raise the organizational level of communal spaces, which will, in turn, become examples and provide real support for the rest of the popular movement.

The Brigade is formed by the militants of the communes and organizations that are part of the Communard Union. It is supported by those same organizations. The Brigade is currently deployed in five regions of the country: East, Llanos, Andes, Center West, and Capital region. The brigade members settle in the territories for ten days, eat, sleep and live with the communards who live there. The brigade members work with people on analyzing the political context. They also do political formation and accompany local communards in the political and productive work.

In doing so, the Brigade contributes to raising people’s morale – due to the crisis, the institutional neglect, political isolation, and loss of perspective, they are often demoralized. Additionally, we attempt to re-politicize people, thus promoting a practice that is very different from the clientelistic, opportunistic, and corrupt dynamics that are so prevalent today.

We also foster the activation or reactivation of communal economic activity. We do this based on what Chávez called the elemental triangle of socialism: social property of the means of production, social production organized by the workers, and production to satisfy common needs.

In the current situation, it is fundamental to activate or reactivate the economic life of the communes in order to guarantee their organizational and political life.

The road to building communal socialism is just beginning. What do you see as the next step in this process that, without a doubt, will need to challenge the model that is being implemented in the country?

It is first necessary to build a programmatic roadmap. This will allow us to have a tactic and a strategy conceived from the commune, borne out of the precepts bequeathed to us by Chávez, and nourished by the experiences of other historical processes. Developing an autonomous program will force the communal movement to strengthen its theoretical efforts, systematize what emanates from practice, and fuel practice with the already existing theoretical inputs. All this must be accompanied by a gigantic educational effort that will allow the whole movement to really make the program of struggle their own.

It is also necessary to build political autonomy, to demonstrate the real potential of self-government, mobilization, organization, and integration of the pueblo in the exercise of politics. All this must take place in a context of popular, communal democracy while breaking with institutional dependence, party tutelage and co-optation, as well as clientelistic and opportunistic dynamics.

It is also essential to build economic autonomy, to consolidate the communal economy in a way that will not only allow communes to survive the volatility of the Venezuelan economy, but also lay the foundations of a socialist economy. In this regard, the Communard Union must also resist and confront the economic liberalization that is being promoted by the government. That comes along with dollarization, hyperinflation, privatizations, wage deterioration, and worker precarity – all of which hit the popular sectors hardest.

We know that the road ahead won’t be easy. But the truth is that if the Venezuelan popular movement in general, and the communal movement in particular, does not manage to consolidate a strong, autonomous project, it won’t become a political alternative and a revolutionary solution to the crisis.