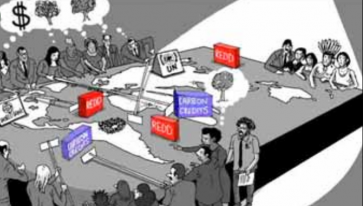 The Converging, Compounded Colonialisms Of CONservation, Carbon Markets And Extractivism

This excerpt from Cassandra’s forthcoming project, Climate Opium: How we are overdosing on false solutions to climate change, is dedicated to the 60,000 political prisoners in Egypt.

“Unless all these prisoners are immediately freed, the United Nations must cancel the climate summit in Sharm el-Sheikh planned for November 2022. Without freedom from dictatorships, colonialism and all injustices, there is no climate justice! NO greenwashing Sisi’s police state!”  –Cassandra

In the name of saving Nature and the climate, the scope of carbon colonialism i has become mind-bogglingly vast. Now, fortress conservation combined with carbon offsets is serving as an excuse to grab half the planet. The United Nations, governments, corporations, Big Oil and so-called conservation organizations want to grab a third ii to half the world’s land and oceans,iii including the majority of Indigenous Peoples’ territories, peasants’ land and Africa for protected areas, carbon offsets, drilling and mining. This Planet Grab for supposed conservation, carbon colonialism and extractivism could harm over 1 billion people,iv result in massive land grabs, violent evictions, threats to cultural survival and render the evicted homeless, landless and starving.

This chapter delves into some of the key drivers of the Planet Grab. It also explores how the colonialisms of carbon markets, conservation and resource extraction build on and mimic historic colonialism as well as converge, complement, compound and compete with each other.

The overarching umbrella of the Planet Grab is capitalism’s predatory relationship with Mother Earth. This lack of respect for the Sacred cements the profit paradigm based on the ever-increasing plunder and exploitation of land, oceans and peoples. Driven by greed and the illusion of infinite market growth, the fallout of this paradigm is unjust and unsustainable models of society, production, distribution and consumption as well as the concentration of wealth and power in the hands of a very few. Several of the resulting super-billionaires, such as Jeff Bezos, avidly fund false solutions to climate change,v which fuel the Planet Grab to further entrench their dominance in both finance and governance.