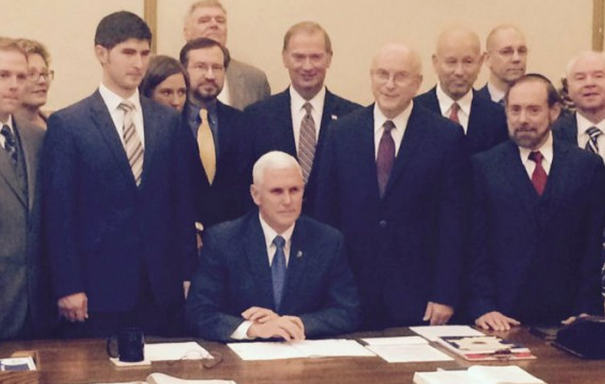 The Corruption Of Mike Pence And The Privatization Of Infrastructure

In 2015, then-Gov. Mike Pence made the controversial decision to keep the Indiana Toll Road under the control of a consortium of private corporations, which was represented by a local lobbying firm that had funneled large donations to Pence’s gubernatorial campaign. This year, the same lobby firm signed up to press the Donald Trump administration on behalf of IFM Investors — the same foreign company that Pence originally approved to run the toll road consortium.

In fact, documents reviewed by International Business Times show the lobbying firm that bankrolled Pence has been in direct contact with the vice president on federal infrastructure policy. The firm has lobbied Pence on behalf of Melbourne-based IFM as Pence has explicitly extolled IFM in his work spearheading a White House plan to privatize roads, bridges and airports. That trillion-dollar initiative, which Trump is scheduled to promote on Tuesday and which could enrich foreign investors, comes as Trump has said he is focused on “putting America first.”

In response to IBT’s questions, White House spokesperson Natalie Strom said in a written statement that Trump “has made it clear that his priority is investment in American infrastructure” and that White House staff “welcome foreign companies who recognize that under President Trump, building American infrastructure is a good investment.” She pointed to a January memorandum pushing for the use of American steel in future pipeline projects.

Last week, an IBT investigative report documented how Pence, in 2015, rejected local counties’ bid to reclaim the 155-mile-long Indiana Toll Road, after the private consortium operating it declared bankruptcy. In making that decision, he also rejected Democratic U.S. Sen. Joe Donnelly’s request that he consider having the state disband the private consortium and take back the road. State records reviewed by IBT show Pence received more than $116,000 from Bose, McKinney & Evans LLP — the parent company of Bose Public Affairs Group LLC, which served as the lobbying firm for the consortium.

Fast forward less than two years later: Only weeks after Pence was sworn in as vice president, and had visited Australia to pitch foreign investors on the Trump administration’s privatization plan, Boseregistered to lobby for IFM in Washington. The company lobbied specifically on “infrastructure investment,” a gig that netted Bose $80,000 so far this year.

In subsequent federal documents filed as Pence continued to advocate for privatization, Bose listed“Vice President of the U.S.” as one of the people it contacted on behalf of IFM in its lobbying on the Trump administration’s “plan as it related to publicly-stated infrastructure investment.” Bose has also expressly lobbied Pence on other issues, such as health care policy, on behalf of the insurance giant UnitedHealth Group, other filings show.

Lisa Gilbert, the vice president of legislative affairs at the consumer rights advocacy group Public Citizen, said while Pence’s connection to the firms was “unsavory” and “raises red flags,” no conflict-of-interest or ethics rules had been breached, and the use of such ties is a commonality in Washington.

“The vice president absolutely has influence on policy,” she said, when asked whether IFM and Bose’s specific targeting of Pence was unusual. “That in itself is not shocking, nor is it shocking that they’d lobby him directly because of their past relationship.”

In a crowded market for infrastructure, she noted, the potential beneficiaries will do what they can to get ahead of the competition.

In a statement, IFM Executive Director Tom Osborne asserted that “infrastructure procurement involving the private sector is generally subject to significant probity processes, which ensure that governments of all levels are selecting the best value-for-money proposals from competitive fields of bidders.” Osborne did not address questions related to Pence’s history with the firm, or its lobbyist’s history with Pence, and whether that raised conflicts-of-interest or ethics concerns, or how IFM is working with the White House to shape infrastructure policy.

Bose did not immediately return requests for comment from IBT, nor did Pence’s office.

During Pence’s April visit to Australia — which took place during the same quarter in which Bose reported that it had lobbied Pence — the vice president explicitly promoted IFM, and as recently as June, representatives for Australian firms like IFM have returned the favor, paying the White House visits to try to influence the administration’s infrastructure initiative. IFM’s chief executive openly acknowledged his firm’s attempts to benefit from the White House’s infrastructure policy plans, telling a newspaper that his corporation wants to invest in American infrastructure under the privatization plan that Pence has been pitching..

In addition to federal records stating IFM directly appealed to Pence when lobbying on infrastructure, another filing shows — through its other main lobbyist, Mayer Brown LLP — IFM lobbied the National Economic Council. The council’s director, Gary Cohn, previously served aspresident and chief operating officer of Goldman Sachs, another frequent participant in public-private partnership infrastructure projects. Goldman raked in millions of dollars in fees for its work on the original 2006 deal to privatize the Indiana Toll Road.

Bose and IFM are not the only foreign corporate interests linked to Indiana that have been lobbying the Trump administration on its infrastructure privatization plan.

Sydney, Australia-based Macquarie Group — the investment firm that partnered with Goldman on, and bankrupted, the Indiana Toll Road — is also pushing its infrastructure agenda in Washington. And it has good reason to: As a previous IBT report on public-private infrastructure projects found, Macquarie has been a leading investor in similar projects in Dallas, Denver and Norfolk, Va. and in a bridge connecting New York’s Staten Island to northeast New Jersey.

A federal lobbying form for the second quarter of this year showed Macquarie, through the firm K&L Gates LLP, lobbied the House, Senate and Department of Transportation on “issues related to asset recycling,” a common term for infrastructure privatization. A former Macquarie executive, DJ Gribbin, now works on infrastructure policy at Trump’s NEC. He previously served as the Department of Transportation’s general counsel and as chief counsel of the Federal Highway Administration under President George W. Bush.

Cintra, along with its parent company, Ferrovial SA, is a member of the Association for the Improvement of American Infrastructure (AIAI). Documents reviewed by IBT show that group lobbied Trump’s White House, the National Economic Council and the Department of Transportation to “increase federal financial incentives for the use of public-private partnerships for infrastructure” and “support for the greater use of public-private partnerships for infrastructure projects in policy proposals from the presidential administration.”

The group also lobbied to “streamline and expedite environmental reviews for infrastructure projects,” a priority that is expected to be enshrined by Trump’s infrastructure-related executive order on Tuesday.

“There is certainly a race to be a part of the infrastructure plans that the White House is creating,” Gilbert, of Public Citizen, said. “The list of unfunded plans is massive.”

Asked whether IFM, Bose, Macquarie, Cintra, Goldman and others’ connections to leaders in the White House provided their lobbyists with an advantage, Gilbert added, “any relationship gives you an edge.”