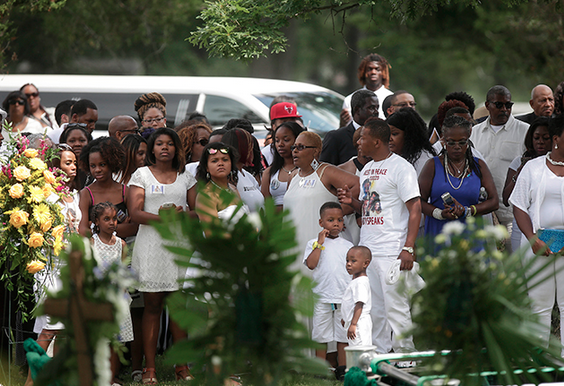 The Cost Of Failing To Comply With Structural Racism

Refusing to Comply With Structural Racism: From Emmett Till to Sandra Bland

Mourners attend the burial service for Sandra Bland at Mount Glenwood Memory Gardens West cemetery in Willow Springs Illinois, July 25, 2015. Friends and family of Bland, who was found dead three days after her illegal arrest in a Texas jail, gathered Saturday to remember someone they say was far from suicidal. (Joshua Lott/The New York Times)

On August 28, 1955, two white men, Roy Bryant and J.W. Milam, killed 14-year-old Emmett Till in Money, Mississippi, after Till reportedly made a flirtatious remark to a white woman. An all-white jury summarily acquitted Roy Bryant and J.W. Milam. Just months later, the two men talked with a reporter and admitted to torturing, killing and mutilating Till.

Till’s mother Mamie Till Mobley heroically insisted on a public funeral with an open casket to expose to the world the brutality of what happened to her son. The funeral and images focused national and international attention on lynching and the apartheid character of American life under Jim Crow, and ignited the civil rights movement.

The death of Sandra Bland, while hidden behind the walls of a jail cell, is also galvanizing an already active movement for Black lives.

On July 10, 2015, Sandra Bland was pulled over in Hempstead, Texas, for a traffic violation. Sandra Bland survived that traffic stop, but she did not survive the three days in jail after that. We may never really know what happened in her case, as is the case for so many others who have died behind prison walls.

But like Mamie Till Mobley, Sandra Bland’s mother, Geneva Reed-Veal, has refused to believe the official narrative. She has been similarly fearless in response to her child’s death. Her eulogy to her daughter was also a call to action. She said, “Once I put this baby in the ground, I’m ready … this means war.”

A whole generation of Black people has been given “the talk” on how to survive police encounters.

Sandra did not stick to that script. She refused to put out her cigarette. She refused to step out of the car. She described the brutality of being shoved to the ground and kneed in the back all because of a traffic violation. She called him every name under the sun. These actions were indicative of her refusal to comply, her refusal to be cowed and her insistence on her humanity. For Black people, those who are supposed to protect and serve us often demand that we comply or die. In this way, as was the case for Emmett Till, Sandra’s gravest misstep was violating the structurally racist order of things.

Unlike the young Emmett Till, Sandra Bland traveled to the South fully conscious of the struggle she would face in Texas. Sandra told her mother before she left, “My purpose is to go back to Texas and stop all of the injustices in the South.” Bland knew these injustices happen all across the United States. She was part of the #BlackLivesMatter movement and an activist for civil rights in Chicago.

Sandra Bland’s death is akin not just to the death of Emmett Till but also to the deaths of Rev. George Lee, Lamar Smith and Medgar Evers. Like those before her, Sandra took conscious risks in the demand for dignity and respect, and she paid with her life. Unlike these individuals, Sandra Bland was a woman. Black women lead this movement.

As a member of Black Lives Matter Bay Area, I attended last weekend’s Movement for Black Lives convening in Cleveland, Ohio, and witnessed a whole new generation of us following. We are refusing compliance.

While I was in Ohio, the Ella Baker Center for Human Rights, the organization of which I am the executive director, hosted a vigil and speak out for Sandra Bland back in Oakland. Black women claimed the space and expressed their rage over what happened to Sandra, the many injustices they have experienced at the hands of the state, and the need for revolutionary change.

We are not asking for entrance or acceptance into this order of things. We see a Black president presiding over the country, and the killings haven’t stopped. We know the president has his own “kill list.” In a country such as this one, the simple demand that Black lives matter has always been a demand for a whole new order of things.