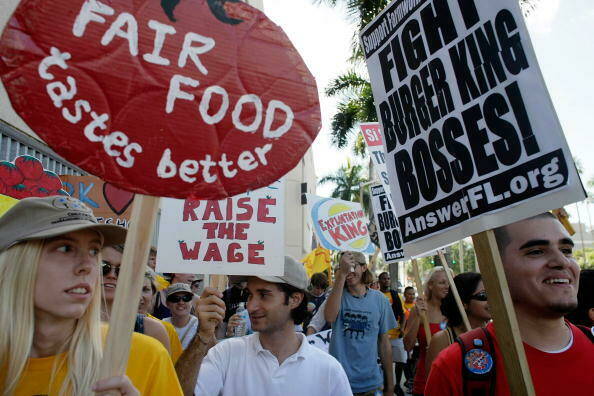 The Creative Methods Workers Are Using To Stop Bosses’ Abuse

Above Photo: People carry signs as they join the Coalition of Immokalee Workers in a protest march against Burger King November 30, 2007 in Miami, Florida. Joe Raedle / staff via Getty.

Why We Need To Enforce Worker Protections To Build The Labor Movement We Want.

In the past six months, workers at more than 150 Starbucks locations have successfully unionized, fighting back against unfair labor practices by their employer. And in April, Amazon warehouse workers won a victory against one of the most powerful corporations in the world when they became the first company facility to vote to unionize in the United States.

Public opinion has shifted to a high point since 1965 of support for unions, with 68% of U.S. adults saying they approve of unions, according to a Gallup poll from September 2021. Most workers would vote for a union tomorrow, if they had the opportunity. Yet, private sector union density continues to hover around a low point of 6.2%. The unionization rate overall is a little over 10%, with public sector participation around one-third.

While recent victories are inspiring, large sectors of the workforce still are not unionized. As we work to change this reality, we also need to make sure that those without unions are protected in the meantime. One important tool for doing so is worker-led enforcement of our labor rights.

Once workers are covered by a union contract, they are well-protected from being fired without a good reason. But winning that contract is no easy feat. Companies spend thousands, even millions, in anti-union tactics. And for immigrants and people of color working to make ends meet, employer retaliation is a constant threat, with workers’ disposability hanging over even the simplest communications with the boss. In parts of the labor market that are marked by the most severe power inequities, employers have wielded abusive tactics for decades to enforce acceptance of degraded wages and conditions. This includes industries like agriculture, in which unionization is not legally protected in most of the country, and construction and manufacturing, where subcontracting shields companies from legal responsibility for workers. This is also a huge problem in domestic work, which often operates in the shadows, and workers have scant protections.

Abusive tactics have become virtual requirements of market competition — the norms of entire industries. For instance, recent testing in Chicago’s industrial temporary staffing sector revealed two-thirds of agencies engaged in race-based hiring discrimination, which sets the stage for the culture of fear perpetuated by retaliation and threats in the workplace.

Effective enforcement of basic rights, especially from illegal retaliation in all its forms, is a critical part of what we need to build back up a large-scale labor movement in this country. But public enforcement, such as enforcement of the minimum wage and anti-discrimination protections, has consistently failed to protect the most vulnerable workers. A patchwork of workers’ rights laws creates an obstacle course for any worker seeking their protection. When you add recklessly slow and burdensome complaint resolution processes that deliver too little too late, you create a perfect storm of impunity for employers to abuse workers who are pushed into silence.

The only effective enforcement programs right now are those built out of private agreements, like union contracts, which can deliver measurable outcomes for workers. Workers can secure not only above-market wages and benefits through a union contract, but also an internal conflict resolution process and democratic voice to negotiate with their employers. For workers at the bottom of supply chains, “Worker-driven Social Responsibility” or “WSR” agreements, are another valuable tool for protecting workers from abuses when state enforcement systems fail. WSR agreements are legally-binding agreements with brands and retailers at the top of supply chains. In the U.S., workers in agriculture have used the model to secure basic, follow-the-law rights across an industry, including from the illegal retaliation that stymies all forms of worker organizing. Internationally, in the garment industry in Bangladesh and Lesotho, unions have taken the lead in using this supply chain model to enforce workplace protections that would be hard to do otherwise.

Since the 2004 founding of Partners for Dignity and Rights, the organization I work for, we have supported worker-based community groups in establishing private enforcement programs through legally-binding WSR agreements with brands and retailers at the top of supply chains. When these companies sign, they agree to only use suppliers that comply with a set of minimum standards, as verified by an independent monitor. Market consequences give WSR programs the enforcement power they need to deliver timely protection to workers.

The Coalition of Immokalee Workers’ (CIW) Fair Food Program demonstrates how this model can work in the U.S. The program, based on 14 contracts with the major buyers of tomatoes, like McDonald’s and Walmart, covers over 30,000 farmworkers and is the result of decades of organizing. The Fair Food Standards Council is the program’s monitor, conducting regular, rigorous, in-person audits, and running a trilingual complaint hotline, while CIW conducts on-site training for every worker on their rights under the program. The Council works with growers to develop corrective action plans to bring about timely changes. For serious abuses, including growers’ failure to immediately redress retaliation and discipline the abusers, growers face suspension or probation from the program and loss of participating buyers’ business.

Securing union contracts in new workplaces and adapting the WSR model in new industries in the U.S. and internationally are important, hard-fought wins for our movement. At the same time, there are literally millions more workers who are adversely affected by the lawlessness of our existing labor market without the protective measures these contracts create. To reach these workers and achieve scale, we need to employ every tool we can to blunt and prevent unlawful retaliation and other abuses.

Under the right circumstances, we should be using public policy to craft new tools for building movement and to extend that much-needed baseline of protection to all workers. Worker-based organizations rooted in working-class immigrant communities and communities of color have been experimenting toward these ends with local policy. The most established of these experiments is “co-enforcement,” introduced by organizations in San Francisco and since replicated in places like Minneapolis and Chicago.

Co-enforcement is a collaboration between public enforcement agencies and worker centers to enforce workers’ rights in industries in which employers are routinely violating those rights but yet workers aren’t filing complaints. In many places, worker centers are already reaching out to these workers, training them on their rights, and supporting them in defending themselves. Co-enforcement programs, like the one that the Chinese Progressive Association (CPA) and its coalition partners originally created in San Francisco, can give workers the support they need to successfully navigate the obstacle course of legal complaint processes. Ideally, it also puts public support, including public money, behind the bread-and-butter tactics that worker-based organizations are already using. When groups like CPA are able to deepen their relationships with public agencies into real collaborations, it creates the additional opportunity for strategic coordination of state powers with the collective power of workers to address abuse and secure quicker and better outcomes for workers. One thing we know for sure is that, for workers without a contract, being in solidarity with other workers is a tried-and-true means of protection.

As we note in a new white paper, there are plenty of opportunities to scale up worker-led governance models, like co-enforcement and standards boards, which are government bodies that bring together workers’ and employers’ representatives to set industry-wide standards, such as wages and working conditions. We can activate all workers to be monitors of their own rights, like workers in California’s janitorial industry who passed an employer mandate for their worker-driven peer education program on sexual harassment (a program that drew inspiration from the Fair Food Program).

There is a lot we can learn from the WSR model as well about how to design public consequences to prevent abuse, and not just return us to a status quo that isn’t working. For instance, the threat of revoking or withholding employer licenses if employers develop a record of violations may curb abuse, so long as violations are being detected in the first place and consequences are timely imposed. For example, employer licensing and registration schemes can be designed to enable better monitoring, which is what the janitors in California did when they designed their law requiring janitorial companies to provide proof of worker participation in the peer education program designed by SEIU USWW and disclose subcontractors as part of annual state registration requirements.

It is possible to use policy to grow effective, worker-led private enforcement models. Inspired by the private models won through worker organizing, we can build a public enforcement system that not only delivers timely relief from retaliation, but actually prevents it. Ultimately, such protections would not only improve the lives of workers, but also pave the way for more unionization — and a stronger labor movement.