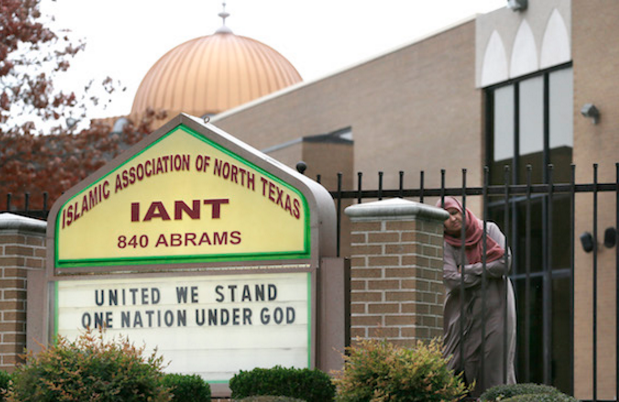 The Creeping Villainy Of American Politics

Above Photo: A Muslim woman looks out as protests take place near a mosque in Richardson, Texas, on Dec. 12. (LM Otero / AP)

The threefold rise in hate crimes against Muslims since the Paris and San Bernardino attacks and the acceptance of hate speech as a legitimate form of political discourse signal the morbidity of our civil society. The body politic is coughing up blood. The daily amplification of this hate speech by a commercial media whose sole concern is ratings and advertising dollars rather than serving as a bulwark to protect society presages a descent into the protofascist nightmare of racism, indiscriminate violence against the marginalized, and a blind celebration of American chauvinism, militarism and bigotry.

The mounting attacks on Muslims, which will become a contagion when there is another catastrophic terrorist attack, are only the beginning. There is a long list to be targeted, including undocumented workers, African-Americans, homosexuals, liberals, feminists, intellectuals and artists. We are entering a new dark age, an age of idiocy and blood. These hatreds, encoded in American DNA but understood as politically toxic by the liberal wing of the capitalist class, have been embraced by an enraged and disenfranchised white underclass. Our failure to curb this hate speech will haunt us. Once a civil society tolerates the intolerant, as Karl Popper wrote, “the tolerant will be destroyed, and tolerance with them.”

The anti-Muslim virus begins slowly. Step by step the hate talk moves from insults, stereotyping and untruths to incendiary calls for vigilantes to attack women wearing the hijab, men wearing kufis, mosques, Islamic centers and schools, and Muslim-owned businesses. It makes sense to many in the white underclass—especially because they have been sold out by the liberals who preach tolerance—that the violent purging of a demonized group from U.S. society can cure the society’s malaise and restore safety and American “greatness.” But soon all marginalized groups will be at risk. Such a process is what happened in the Weimar Republic. It is what happened in Yugoslavia. It is what happened in Israel.

“What is dangerous about the creeping villainy is that it takes considerable imagination and considerable dialectical abilities to be able to detect it at the moment and see what it is,” the philosopher Søren Kierkegaard wrote in his “Journals and Notebooks.” “Well, neither of these features [imagination and dialectical ability] are prominent in most people—and so the villainy creeps forward just a little bit each day, unnoticed.”

Glenn Beck’s best-selling book “It Is About Islam: Exposing the Truth About ISIS, Al Qaeda, Iran, and the Caliphate” posits that a quarter of American Muslims, 300,000 to 500,000 in his estimate, believe that violence should be used to overthrow the state and annul the Constitution in order to replace our judicial system with Sharia law. He says Islam keeps followers living in “the stone age.” His rant against Muslims parallels his rants against undocumented workers. He once, for example, said there are only three reasons Mexicans come to the United States: “One, they’re terrorists; two, they’re escaping the law; or three, they’re hungry. They can’t make a living in their own dirtbag country.” This extremism, expressed by Beck and many others, is moving with terrifying speed to the center of American political debate. And the mainstream press, which prizes sensationalism over news and truth, has abrogated its role as an arbiter of fact and rational discourse to peddle spectacle and sensationalism.

Kierkegaard was as scathing about the press as he was about the public. He noted:

The daily press is the evil principle of the modern world, and time will only serve to disclose this fact with greater and greater clearness. The capacity of the newspaper for degeneration is sophistically without limit, since it can always sink lower and lower in its choice of readers. At last it will stir up all those dregs of humanity which no state or government can control.

The ideological war began in earnest immediately after the attacks of 9/11. Hatemongers and racists, before then primarily relegated to the margins of society, laid the foundations for the collapse of civil discourse.

“The Muslims sat aside for the last 15 years and allowed a complete reframing of this issue by highly funded groups such as the extreme Christian right or people like Glenn Beck,” said the Islamic scholar Hamza Yusuf, whom I reached by phone in Berkeley, Calif. “Beck argues that the problem is Islam itself. But this is also true on programs such as the ‘700 Club.’ They attack Islam as a religion. They call it a demonic force. We have had 15 years of an incredible propaganda machine that has presented Muslims as a fifth column and Islam as an anti-Christian force, as the greatest threat to Western civilization. For too many people, Islam is now conflated with Nazism.”

Extremist groups, embodied by the Christian right and Islamic State (also known as ISIS and ISIL), have distorted Christianity and Islam to sanctify their mutual hatreds and bloodlusts. These groups prey upon the legions of the disenfranchised, most of whom do not come out of religious households or religious communities, but who find in thin clichés and slogans a simplistic and self-aggrandizing worldview. New converts are catapulted from despair and hopelessness into a Manichean world of good and evil. They are told their rage and lust for violence are sanctified. They are authorized by demagogues and warlords to persecute and kill in the name of God.

“Groups such as ISIS, especially in the West, draw from uneducated, disenfranchised, alienated and very often oppressed minority groups,” said Yusuf, who is the president and co-founder of Zaytuna College, in Berkeley. “When you see pictures of converts, you often see tattoos on their necks. Many have had run-ins with the law or have prison records. They have a lot of anger towards the society, much of it justified.”

The indiscriminate violence unleashed by the United States against Muslim communities in the Middle East has at the same time radicalized whole populations, which are bombed and otherwise terrorized daily.

“Obama talks about the hateful, vengeful ideology we are up against,” Yusuf said, “but he is not addressing the hate that hate produced. The current presentation of the conflict is irrational—as if Muslims hate us for our freedoms and our way of life. Undeniably, envy and resentment have their parts to play, but that is not the major factor. It is a small variable. The problem is the violence and brutalization that has occurred in the Muslim world. Pakistani children in areas under drone attacks hate sunny days because of the drones, which don’t function in cloudy weather. The only days they feel comfortable playing in northern Pakistan is on cloudy days because the drones can’t see them. This terror has consequences.”

Yusuf argues that the radical ideology of Islamic State, much like that of many in the Christian right, is far more a product of modernity than antiquity.

“ISIS promotes a hybridization of Salafi-Takfiri ideology with political Islamism, along with a smattering of Baathist brutality,” he said. “Old leaders in the Iraqi government joined the movement, similar to the way the old Marxist PLO transitioned into Hamas. In the 1980s and 1990s, with the Iranian revolution and the renaissance of Islam as a political response, people brought previous beliefs and experiences into these movements. They gave older modernist ideologies the veneer of Islam. ISIS adheres to more of a Marxist—the ends justify the means—ideology. It is anything but Islamic. In Islamic law there are strict rules of engagement. The Koran has several verses about treating prisoners well. ISIS is not a manifestation of anything Islamic. The essence of Islam is mercy and compassion.” [Definitions: Salafi. Takfiri. Baathist.]

The lust for brutality, Yusuf points out, is not limited to groups such as Islamic State. It is more than matched by numerous voices in the West. He cited the author Sam Harris’ call in his best-selling book “The End of Faith” for the West to consider carrying out a nuclear first strike on the Muslim world. Harris writes in his book:

Notions of martyrdom and jihad run roughshod over the logic that allowed the United States and the Soviet Union to pass half a century perched, more or less stably, on the brink of Armageddon. What will we do if an Islamist regime, which grows dewy-eyed at the mere mention of paradise, ever acquires long-range nuclear weaponry? If history is any guide, we will not be sure about where the offending warheads are or what their state of readiness is, and so we will be unable to rely on targeted, conventional weapons to destroy them. In such a situation, the only thing likely to ensure our survival may be a nuclear first strike of our own. Needless to say, this would be an unthinkable crime—as it would kill tens of millions of innocent civilians in a single day—but it may be the only course of action available to us, given what Islamists believe.

“There are a lot of uneducated people out there, and this tripe appears nutritious to them,” Yusuf said. “I did not see anyone up in arms about Harris’ statement. Yet they are constantly going on about the brutality of Muslims. Meanwhile, we [Americans] talk daily about carpet-bombing the Middle East and killing ISIS family members.”

If there is another major terrorist event on American soil, Yusuf said, the response will not be like the one that followed 9/11. “It won’t be flowers at the mosque. The response will be retaliatory. There will be a desire for revenge. I am not surprised we are where we are. I am surprised it took us this long to get here given the forces at work.”

The backlash against the settling of thousands of Syrian, Iraqi and Afghan refugees, he said, also plays into the hands of Islamic State. ISIS condemns the West as unfit for Muslims. It holds up its self-proclaimed Caliphate as a sanctuary and refuge for Sunni Muslims. If Western nations accept large numbers of refugees—many fleeing ISIS-controlled territory—they shatter this belief. By turning refugees away they legitimate the bifurcation of the world into Muslim and non-Muslim.

“If you read Dabiq, ISIS’ journal in English, it constantly says that what it calls the ‘gray zone’ will be eliminated,” Yusuf said. “ISIS tells American Muslims and Western European Muslims that their mosques will be attacked, Muslim women will be assaulted, they will not feel safe in their homes. ISIS says make the hegira now before it is too late. The elimination of the gray zone is central to their strategy. Our living together is the thing that disgusts them most. They seek to destroy multicultural, multifaith civilizations, although that is what the Muslim world was in the past. Hence, [the ISIS] destruction ofMelkite and Assyrian churches, which have existed for centuries and which were protected by Muslims. This destruction is one of the greatest crimes in the history of Islam. These religious communities, considered heretical or heterodox, were not safe in Orthodox and Catholic Europe, but were safe to flourish in the pluralistic societies Muslims created. The worst nightmare for ISIS, like the demagogues in the West, is that we reject their call to create a wedge between religious communities.”