The Criminalization Of Poverty And What To Do About It

Note: The Poor People’s Campaign kicked off its 40 days of nonviolent direct action yesterday. One of their slogans is to “Wage War on Poverty, Not a War on the Poor.” There are many policies that essentially a war on the poor. People are recognizing that we need to create a new economy that decriminalizes poverty. Below is an executive summary of a report, The Criminalization of Poverty: How to Break the Cycle Through Policy Reform in Maryland, published by a Maryland group, the Job Opportunities Task Force. The problems and solutions they describe while focused on Maryland are national and scope. The full report is worth reviewing for people who care about these issues. KZ

The Criminalization of Poverty: How to Break the Cycle Through Policy Reform 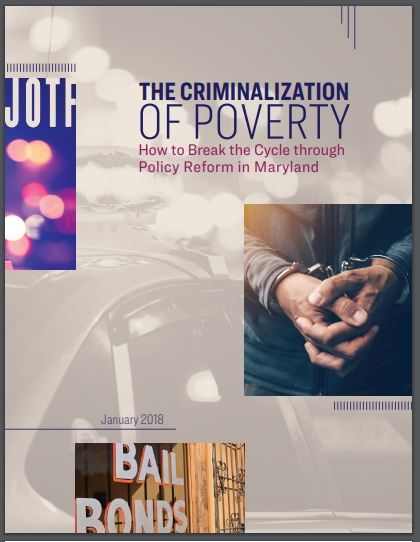 In August 2016, the United States Department of Justice issued a report following its investigation into the policies and practices of the Baltimore Police Department. The report was in response to the 2015 police-involved death of Baltimore resident Freddie Gray and the subsequent unrest that gripped the city. During that historic week in
April 2015, the world watched as Baltimore residents took to the streets to call for an end to police brutality and demand reforms in police accountability. In response to the death of Freddie Gray, what surfaced was communal anger and frustration at a dynamic that has plagued Baltimore communities for decades: an overreliance on incarceration and a divestment in economic opportunities.

Given growing national attention and local concern around the impact of incarceration on working families, the Job Opportunities Task Force sought to define and determine the extent to which the criminalization of poverty is occurring in Maryland. Indeed, the August 2016 United States Department of Justice report on the Baltimore Police Department created a greater sense of urgency around issues of poverty, race and criminal records. Therefore, the goal of this project is to identify whether there are key laws, policies, and practices in Maryland that are either unnecessarily penalizing the poor or leading the poor to be unnecessarily arrested, charged with a crime or
imprisoned because they are poor and therefore unable to satisfy the demands of the law. Our investigation revealed
that the criminalization of poverty is occurring in Maryland, with a disproportionate impact on people of color.
Consequently, our findings are organized into three themes:

1. Common Pathways Through Which the Poor Are Criminalized: There are at least four key pathways
through which the poor, especially people of color, are put at greater risk of entering the criminal justice system than other groups: racial profiling, civil asset forfeiture, motor vehicle laws, and the collection of child support and civil debts. Part 1 will examine each entry point and how their intersection can easily lead poor communities of color into and through the criminal justice system.

2. The Criminal Justice System’s Disparate Impact on the Poor: After arrest, certain groups, particularly poor communities of color, face disparate treatment and outcomes as compared to other groups in the community. These groups are also more likely to be impacted by and unable to afford the accompanying fees and fines and resulting increased debt. Part 2 will examine the imposition of both court-specific and court-related fines and fees and its impact on poor defendants in civil and criminal courts.

3. Collateral Consequences of a Criminal Record: While there are numerous collateral consequences of a criminal record in Maryland, there are a few key collateral consequences that present major barriers to economic success for individuals with a criminal background. Part 3 will examine those key sanctions and how they reinforce a cycle of poverty and criminalization. We must break this cycle. Recommendations for policy reform are presented throughout the report to better understand the magnitude of this issue and explore opportunities to reduce the criminalization of poverty in Maryland. Key recommendations include:

1. End common practices that criminalize the poor by:

a. Enforce laws that protect against racial profiling.

c. Eliminate driver’s license suspension as a penalty for nonpayment of fines.

f. Eliminate the use of arrest as a way to collect debt.

2. Reform the criminal justice system to end disparate impact on the poor by:

a. Limit the use of cash bail.

c. Eliminate most or all criminal justice fees.

3. Limit the collateral consequences of a criminal record and help returning citizens remain out of prison by:

a. Expand the statewide “Ban the Box” law.

b. Continue to expand and simplify expungement

c. Monitor effective implementation of the Maryland Fair Access to Education Act of 2017 (ban the box on college applications).

e. Opt out of the felony drug ban on TANF (TCA) and SNAP.

This report reveals that many of Maryland’s current laws, enforcement schemes, monetary penalties and related policies and practices disproportionately criminalize the poor, with a disproportionate impact on communities of color. If we seek to achieve a more just and inclusive society, and if we truly believe that every resident of Maryland should have equal opportunities for economic mobility and life success, targeted reform, both within and outside
of the criminal justice system, is needed.

1. State laws, policies and practices that unnecessarily penalize the poor without any counterbalancing benefit to them.

2. Situations where a person is arrested and charged with a crime and/or is imprisoned because of the fact that he is poor and unable to satisfy the demands of the law.

Several of the laws, policies and practices reviewed in the report only fit one of the two definitions above, but the majority encompass both definitions.