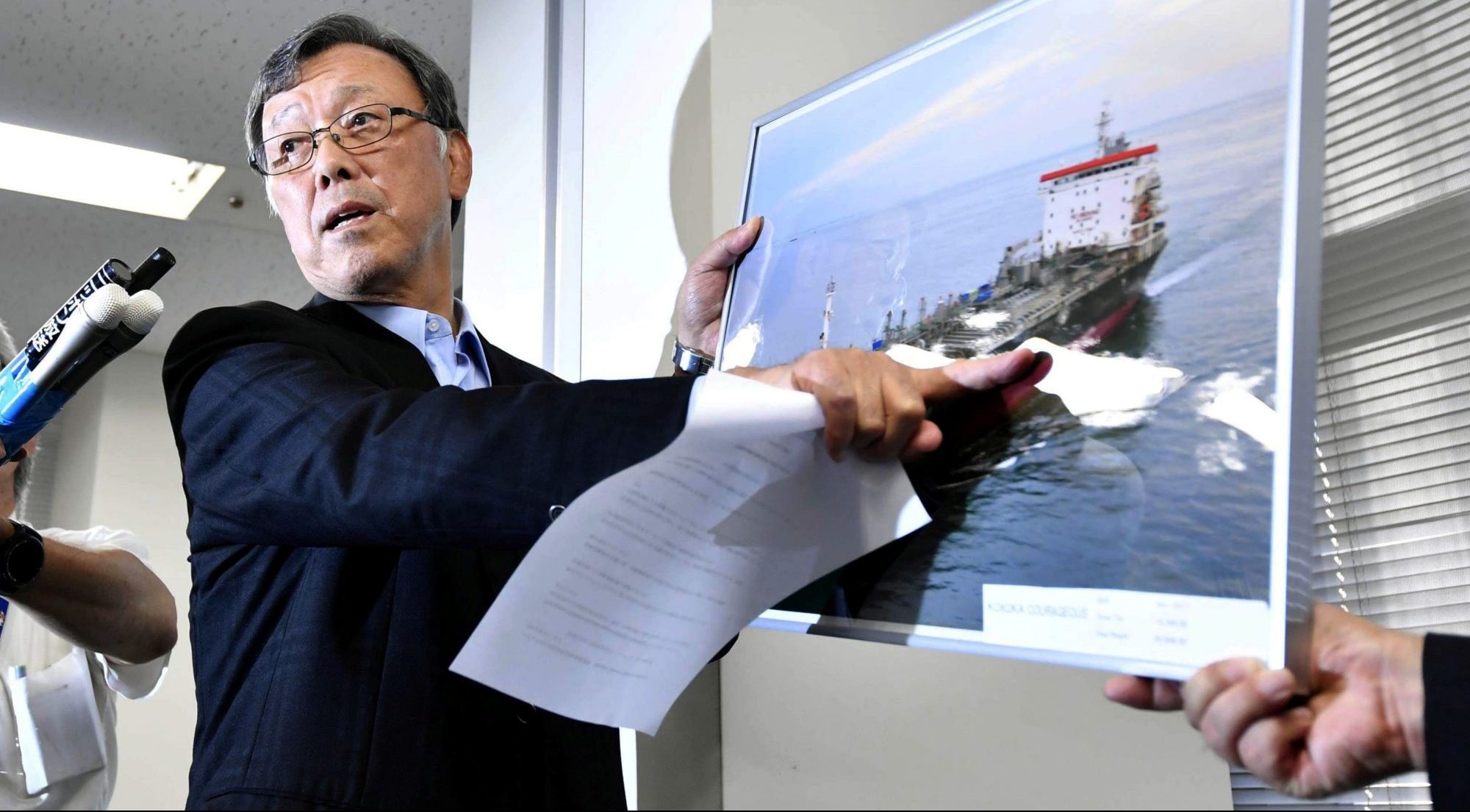 The Curious Case Of The Tankers

Above photo: Yutaka Katada, president of shipping company Kokuka Sangyo Ltd. points to a picture of their tanker Kokuka Courageous, one of two that were hit in suspected attacks in the Gulf of Oman, during a news conference in Tokyo, Japan June 14, 2019. Kyodo | Reuters

I have taken the opportunity to look at the recent incident involving two outbound tankers in the Gulf of Oman. I have got some questions or two, (or three) about certain parts of the incident, from a civilian mariner’s perspective mostly.

There are various conflating aspects to the event, and questions need to be asked, yet journalists do not seemingly wish to ask the awkward but necessary questions these days.

The two tankers identified as the ‘Front Altair’, a Marshall Islands flagged vessel and the ‘Kokuka Courageous’, a Panama-flagged vessel.

Both tankers were outbound (south east) of the Strait of Hormuz. Both suffered from explosion on the starboard side, (the side facing international waters). Past AIS tracks of both vessels shown here. The U.S. Navy reported receiving distress messages at 06:12am and 07:00am.

We’ve captured the activity of the vessels that raced to the area to help the crew of #FrontAltair & #Kokuka Courageous.
Watch the vessels #Hyundai Dubai, #Etwo, #CoastalAce & #NAJI10 in this past track video. #MarineTraffic #GulfOfOman #OOTT #tankers #rescue #Iran pic.twitter.com/RQSCmZRd9Z

The activity of the vessels was captured in this past AIS track video. It shows the vessels that went to the tankers, to help the crew of the tankers. The assisting vessels are: Hyundai Dubai, tug ‘E-Two’, the Coastal Ace & ‘Naji 10’.

The US military released a video claiming to show an Iranian naval boat removing an unexploded limpet mine from the hull of the ‘Kokuka Courageous’ in an apparent attempt to recover evidence of its participation. I will comment more about the video later on, but we have already the ludicrous situation where the information provided by the US contradicts the statement made by the Japanese ship management company, who did not believe the ship was damaged by a mine, but by flying objects. The president of Kokuka Sangyo Marine, (shipowners), Yutaka Katada, said “there is no possibility of mine attack as the attack is well above the waterline.”

Questions, questions: then there is the question of timing of an attack of a Japanese owned tanker at a time when the Japanese PM was in Iran for talks.

To add to the confusion, there were reports that the Dutch crew of the ‘Coastal Ace’ who first noted a suspicious object on the hull of the tanker. This then morphed into reports that the USS Bainbridge seeing a suspect device, as shown in the timeline provided by the US Navy.

Regarding the other tanker, ‘Front Altair’, the ‘Hyundai Dubai’ was the first ship on scene who responded to the distress message and rescued the crew. Subsequently, it seems the master of this vessel gave a report on VHF: video & audio (unconfirmed).

The audio is rather telling & factual (it is a Russian speaker apparently), as he relays information from the ‘Front Altair’, ‘torpedo attack” is mentioned. (I am assuming is it is pan, pan or urgency message; it is not a distress message).

The U.S. by releasing a grainy black & white video segment, accused Iran of removing a mine from the other tanker, ‘Kokuka Courageous’, as apparent evidence of its involvement in the attacks of the two tankers. The video raises more questions than provides answers.

If both the civilian crew of the ‘Coastal Ace’ and the ‘USS Bainbridge’ both saw the ‘mine’, late morning, then why leave the important evidence in place on the hull of the tanker for several hours? For the Iranians to pick it up later?

“USS Bainbridge (DDG 96) was operating in the vicinity and provided immediate assistance to the M/V Kokuka Courageous.”

“At 11:05 a.m. local time USS Bainbridge approaches the Dutch tug Coastal Ace, which had rescued the crew of twenty-one sailors from the M/T Kokuka Courageous who had abandoned their ship after discovering a probable unexploded limpet mine on their hull following an initial explosion.”

Timings put in bold for emphasis by author.

The poor quality of the video, apparently taken from a P-8 US navy aircraft, is astounding, given that it took place at 16:00, on a sunlit day. Compare the quality and availability of the metrics between what happened during the encounter between the ‘Admiral Vinogradov’ and the ‘USS Chancellorsville, last week: 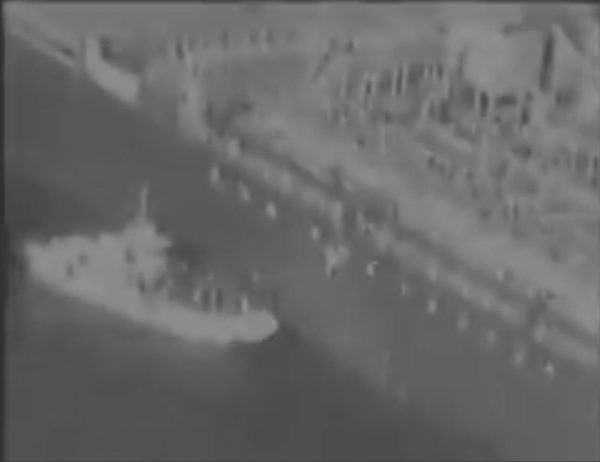 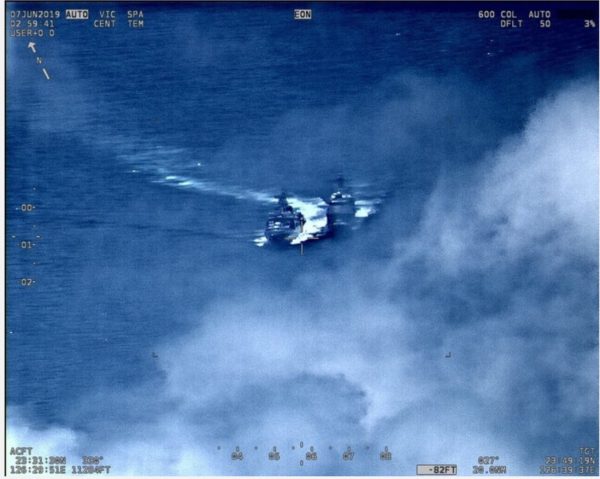 I know that optical quality is downgraded for security reasons, but this is beyond a joke in the days of HD and high-quality images on mobile phones.

Not exactly covert, to retrieve a ‘mine’ right under the noses of the US Navy? Especially when you can see in the video people on the Iranian boat looking towards a ship (?) and quite possibly the US aircraft as well. Anyway, does it take 10 people all crowded on the bow to remove a ‘mine’? Unusual EOD method there.

Does it occur to anyone that it might be a person releasing something so that the boat can leave the tanker’s side, a mooring line attachment, a magnetic device? There is no proof to suggest it was a limpet mine removed from the tanker.

The other thing that really bugs me as someone with maritime experience, is the fact that the US Navy was quite relaxed about a fully loaded tanker with methanol with an apparent explosive device attached to the hull amidships.

I personally wouldn’t be calm, due to the implication of having a toxic, polluting and highly flammable cargo, possibly seconds from being ignited. I’d be getting an EOD team over quickly to ID it, to make it safe and hand it over as a crucial piece of evidence. Yet, I cannot ascertain that any of that actually happened while the USS Bainbridge was in the vicinity of the tanker. I guess it was better to wait a few hours and let the Iranians do it. Surreal.

Instead, it seems that the US Navy stood by idly for hours, watched and let the Iranians approach the tanker, so as to gather ‘evidence’.

Another thing, this PowerPoint from the US is rather remarkable: 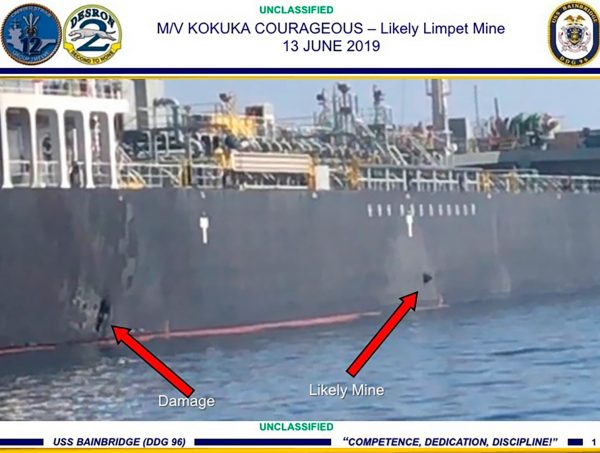 I guess using a telephoto lens wasn’t appropriate, to get a close-up of the darned ‘mine’ thing. Again, compare this with the US naval person on the ‘USS Chancellorsville’, merrily snapping away at the ‘Admiral Vinogradov’. 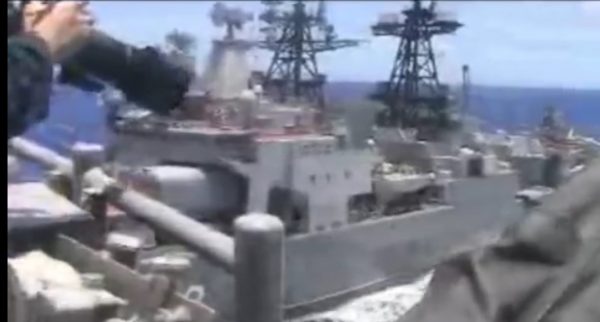 Just on this point, I like the witticism on social media:

This a good ‘un too:

“Breaking: The US Navy has confirmed that there has been a reported attack on US tankers in the Gulf of Oman.” Posted by SkyNews at 12:37 am 13 June

Credibility has gone down the drain, as the tweet is still live as I write this a day later.

I know it seems little silly observations, but some of these observations could have been made by journalists when presented with official statements. Yet the most obvious question is:

“Why would Iran attack two tankers near to the Strait of Hormuz, in the vicinity of US naval forces”? Some comments provided by this Military Times article. I’ll leave that for others to comment and analyze.