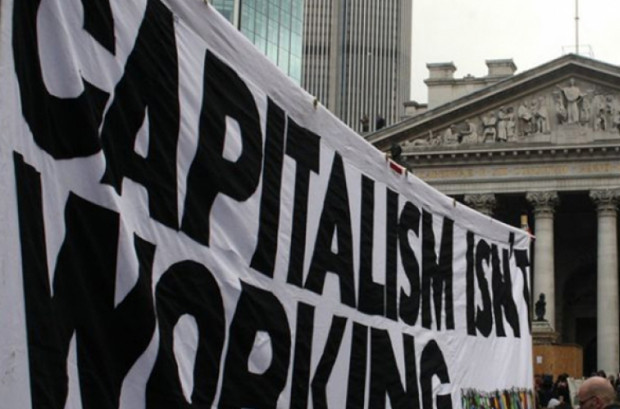 The Dance Of Death

Editor’s note: This is a repost of a March 12 column by Chris Hedges, who is on vacation.

The ruling corporate elites no longer seek to build. They seek to destroy. They are agents of death. They crave the unimpeded power to cannibalize the country and pollute and degrade the ecosystem to feed an insatiable lust for wealth, power and hedonism. Wars and military “virtues” are celebrated. Intelligence, empathy and the common good are banished. Culture is degraded to patriotic kitsch. Education is designed only to instill technical proficiency to serve the poisonous engine of corporate capitalism. Historical amnesia shuts us off from the past, the present and the future. Those branded as unproductive or redundant are discarded and left to struggle in poverty or locked away in cages. State repression is indiscriminate and brutal. And, presiding over the tawdry Grand Guignol is a deranged ringmaster tweeting absurdities from the White House.

The graveyard of world empires—Sumerian, Egyptian, Greek, Roman, Mayan, Khmer, Ottoman and Austro-Hungarian—followed the same trajectory of moral and physical collapse. Those who rule at the end of empire are psychopaths, imbeciles, narcissists and deviants, the equivalents of the depraved Roman emperors Caligula, Nero, Tiberius and Commodus. The ecosystem that sustains the empire is degraded and exhausted. Economic growth, concentrated in the hands of corrupt elites, is dependent on a crippling debt peonage imposed on the population. The bloated ruling class of oligarchs, priests, courtiers, mandarins, eunuchs, professional warriors, financial speculators and corporate managers sucks the marrow out of society.

The elites’ myopic response to the looming collapse of the natural world and the civilization is to make subservient populations work harder for less, squander capital in grandiose projects such as pyramids, palaces, border walls and fracking, and wage war. President Trump’s decision to increase military spending by $54 billion and take the needed funds out of the flesh of domestic programs typifies the behavior of terminally ill civilizations. When the Roman Empire fell, it was trying to sustain an army of half a million soldiers that had become a parasitic drain on state resources.

The complex bureaucratic mechanisms that are created by all civilizations ultimately doom them. The difference now, as Joseph Tainter points out in “The Collapse of Complex Societies,” is that “collapse, if and when it comes again, will this time be global. No longer can any individual nation collapse. World civilization will disintegrate as a whole.”

Civilizations in decline, despite the palpable signs of decay around them, remain fixated on restoring their “greatness.” Their illusions condemn them. They cannot see that the forces that gave rise to modern civilization, namely technology, industrial violence and fossil fuels, are the same forces that are extinguishing it. Their leaders are trained only to serve the system, slavishly worshipping the old gods long after these gods begin to demand millions of sacrificial victims.

“Hope drives us to invent new fixes for old messes, which in turn create even more dangerous messes,” Ronald Wright writes in “A Short History of Progress.” “Hope elects the politician with the biggest empty promise; and as any stockbroker or lottery seller knows, most of us will take a slim hope over prudent and predictable frugality. Hope, like greed, fuels the engine of capitalism.”

The Trump appointees—Steve Bannon, Jeff Sessions, Rex Tillerson, Steve Mnuchin, Betsy DeVos, Wilbur Ross, Rick Perry, Alex Acosta and others—do not advocate innovation or reform. They are Pavlovian dogs that salivate before piles of money. They are hard-wired to steal from the poor and loot federal budgets. Their single-minded obsession with personal enrichment drives them to dismantle any institution or abolish any law or regulation that gets in the way of their greed. Capitalism, Karl Marx wrote, is “a machine for demolishing limits.” There is no internal sense of proportion or scale. Once all external impediments are lifted, global capitalism ruthlessly commodifies human beings and the natural world to extract profit until exhaustion or collapse. And when the last moments of a civilization arrive, the degenerate edifices of power appear to crumble overnight.

Sigmund Freud wrote that societies, along with individuals, are driven by two primary instincts. One is the instinct for life, Eros, the quest to love, nurture, protect and preserve. The second is the death instinct. The death instinct, called Thanatos by post-Freudians, is driven by fear, hatred and violence. It seeks the dissolution of all living things, including our own beings. One of these two forces, Freud wrote, is always ascendant. Societies in decline enthusiastically embrace the death instinct, as Freud observed in “Civilization and Its Discontents,” written on the eve of the rise of European fascism and World War II.

The lust for death, as Freud understood, is not, at first, morbid. It is exciting and seductive. I saw this in the wars I covered. A god-like power and adrenaline-driven fury, even euphoria, sweep over armed units and ethnic or religious groups given the license to destroy anything and anyone around them. Ernst Juenger captured this “monstrous desire for annihilation” in his World War I memoir, “Storm of Steel.”

A population alienated and beset by despair and hopelessness finds empowerment and pleasure in an orgy of annihilation that soon morphs into self-annihilation. It has no interest in nurturing a world that has betrayed it and thwarted its dreams. It seeks to eradicate this world and replace it with a mythical landscape. It turns against institutions, as well as ethnic and religious groups, that are scapegoated for its misery. It plunders diminishing natural resources with abandon. It is seduced by the fantastic promises of demagogues and the magical solutions characteristic of the Christian right or what anthropologists call “crisis cults.”

Norman Cohn, in “The Pursuit of the Millennium: Revolutionary Messianism in Medieval and Reformation Europe and Its Bearing on Modern Totalitarian Movements,” draws a link between that turbulent period and our own. Millennial movements are a peculiar, collective psychological response to profound societal despair. They recur throughout human history. We are not immune.

“These movements have varied in tone from the most violent aggressiveness to the mildest pacifism and in aim from the most ethereal spirituality to the most earth-bound materialism; there is no counting the possible ways of imagining the Millennium and the route to it,” Cohen wrote. “But similarities can present themselves as well as differences; and the more carefully one compares the outbreaks of militant social chiliasm during the later Middle Ages with modern totalitarian movements the more remarkable the similarities appear. The old symbols and the old slogans have indeed disappeared, to be replaced by new ones; but the structure of the basic phantasies seems to have changed scarcely at all.”

These movements, Cohen wrote, offered “a coherent social myth which was capable of taking entire possession of those who believed in it. It explained their suffering, it promised them recompense, it held their anxieties at bay, it gave them an illusion of security—even while it drove them, held together by a common enthusiasm, on a quest which was always vain and often suicidal.

“So it came about that multitudes of people acted out with fierce energy a shared phantasy which though delusional yet brought them such intense emotional relief that they could live only through it and were perfectly willing to die for it. It is a phenomenon which was to recur many times between the eleventh century and the sixteenth century, now in one area, now in another, and which, despite the obvious differences in cultural context and in scale, is not irrelevant to the growth of totalitarian movements, with their messianic leaders, their millennial mirages and their demon-scapegoats, in the present century.”

The severance of a society from reality, as ours has been severed from collective recognition of the severity of climate change and the fatal consequences of empire and deindustrialization, leaves it without the intellectual and institutional mechanisms to confront its impending mortality. It exists in a state of self-induced hypnosis and self-delusion. It seeks momentary euphoria and meaning in tawdry entertainment and acts of violence and destruction, including against people who are demonized and blamed for society’s demise. It hastens its self-immolation while holding up the supposed inevitability of a glorious national resurgence. Idiots and charlatans, the handmaidens of death, lure us into the abyss.