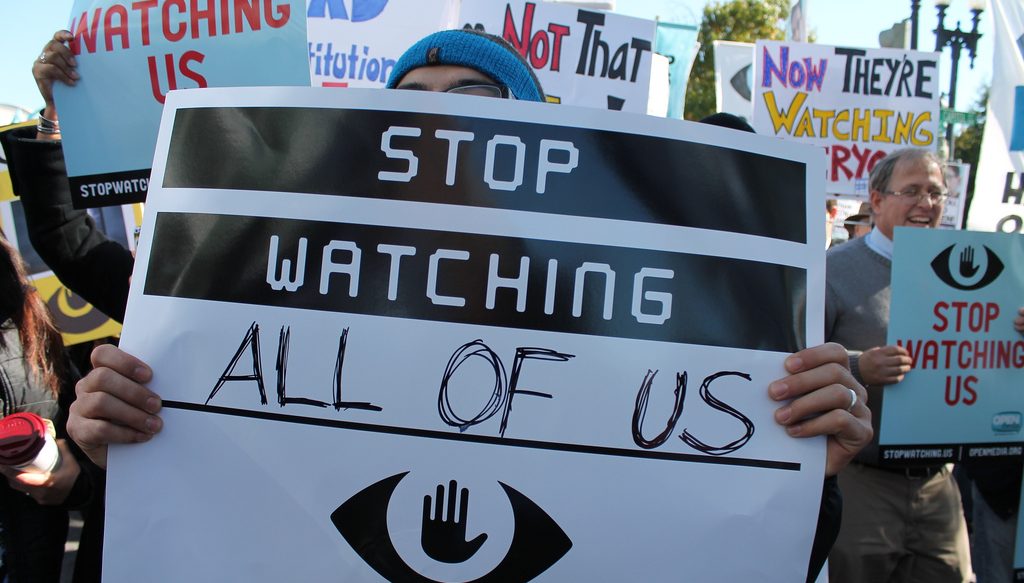 Above photo: A march against NSA mass surveillance in Washington D.C. on Oct. 26, 2013 by flickr user Elvert Barnes.

Many of the new surveillance powers now sought by the government to address the COVID-19 crisis would harm our First Amendment rights for years to come. People will be chilled and deterred from speaking out, protesting in public places, and associating with like-minded advocates if they fear scrutiny from cameras, drones, face recognition, thermal imaging, and location trackers. It is all too easy for governments to redeploy the infrastructure of surveillance from pandemic containment to political spying. It won’t be easy to get the government to suspend its newly acquired tech and surveillance powers.

When this wave of the public health emergency is over and it becomes safe for most people to leave their homes, they may find a world with even more political debate than when they left it. A likely global recession, a new election season, and re-energized social movements will provide an overwhelming incentive for record numbers of people to speak out, to demonstrate in public places, and to demand concessions of their governments. The pent-up urge to take to the streets may bring mass protests like we have not seen in years. And what impact would new surveillance tools, adopted in the name of public health, have on this new era of marches, demonstrations, and strikes?

The collection and sharing of phone location data that was sold and deployed in order to trace the spread of the virus could be used by a reigning administration to crack down on dissent. The government and vendors have yet to make a convincing argument for how this measure would contribute to the public health effort. Indeed, they cannot, because GPS data and cell site location information are not sufficiently granular to show whether two people were close enough together to transmit the virus (six feet). But this data is sufficiently precise to show whether a person attended a protest in a park, picketed in front of a factory, or traveled at night to the block where a dissident lives.

Many other technologies that should never be deployed to prevent the spread of the virus would also harm free speech. Vendors are seeking to sell face recognition cameras to the government to alert authorities if someone in mandatory quarantine went grocery shopping. They could just as easily be used to identify picketers opposing government initiatives or journalists meeting with confidential sources. For example, the infamous face surveillance company, Clearview AI, is in talks with the government to create a system that would use face recognition in public places to identify unknown people who may have been infected by a known carrier. This proposal would create a massive surveillance infrastructure, linked to billions of social media images, that could allow the government to readily identify people in public spaces, including protesters, by scanning footage of them against images found online. Likewise, thermal imagining cameras in public places will not be an effective means of finding people with a fever, given the high error rate when calculating a person’s temperature at a distance. But police might be able to use such cameras to find protesters that have fled on foot from police engaged in excessive force against peaceful gatherings.

The U.S. government is not known for its inclination to give back surveillance powers seized during extraordinary moments. Once used in acute circumstances, a tool stays in the toolbox until it is taken away.  The government did not relinquish the power to tear gas protesters after the National Guard was called in to break up the Bonus Marchers assembled in the capitol during the Great Depression. Only after decades of clandestine use did the American people learn about the ways the FBI misused the threat of Communism to justify the wholesale harassment, surveillance, and sabotage of civil rights leaders and anti-war protesters. The revelation of these activities resulted in Sen. Frank Church’s investigations into U.S. surveillance in the mid-1970s, the type of forceful oversight of intelligence agencies we need more of today. And the massive surveillance apparatus created by the PATRIOT Act after 9/11 remains mostly intact and operational even after revelations of its overreach, law-breaking, and large-scale data collection on U.S. persons.

Even more proportionate technologies could be converted to less benign purposes than COVID-19 containment. Bluetooth-based proximity tracking apps are being used to trace the distance between two peoples’ phones in an attempt to follow potential transmission of the virus. Done with privacy as a priority, these apps may be able to conceal the identities of people who come into contact with each other. Done wrong, these apps could be used to crack down on political expression. If police know that Alice was at a protest planning meeting, and police learn from the proximity app that Alice was near Bob that day, then police could infer that Bob was also at the meeting. Some versions of these apps also collect identifiers or geolocations, which could further be used to identify and track participants in protest planning meetings.

Done without collecting identifying information and minimizing storage, measures like aggregate geolocation tracking might assist public health response and be difficult to weaponize against protestors. But done with deliberate intention to survey demonstrations, aggregate location data might be disaggregated, merged with other data, and used to identify individual people. For example, police could single out individual protestors in a public plaza, track them to their respective homes and workplaces once the demonstration is over, and thereby identify them.

Free speech and political participation are chilled when governments put protests, protestors, activists, and organizers under surveillance. Studies have found that when people are aware of surveillance, they’re less likely to engage in political speech or debate the important issues of the day. The First Amendment also protects the right of association for purposes of collective expression. This right is threatened if people are worried that they will be put under surveillance for joining or meeting with specific people or groups. Suddenly a person’s movements, correspondence, or personal relationships are scrutinized by strangers within the government. At a moment when our society is desperate to find innovative solutions to daunting political problems, we should loudly condemn any surveillance efforts which might chill our ability to freely discuss and associate about pressing issues.

EFF has clear guidelines for how we evaluate a piece of surveillance technology proposed as a tool of public health: Would it work? Is it too invasive? Are their sufficient safeguards? One of the biggest concerns is that new powers introduced at this current moment will long outstay their necessity, experience mission creep, and by overtly redeployed for other purposes. Now, more than ever, we must stay vigilant about any new surveillance powers, technologies, and public-private relationships.