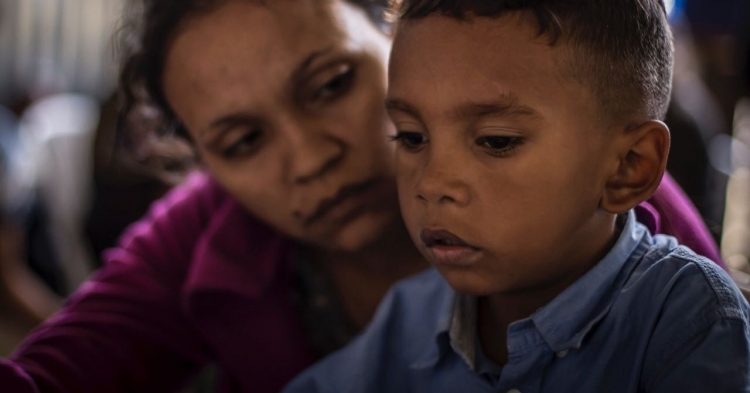 Above Photo: A family traveling with a migrant caravan in Mexico in 2018.  Photo: Omar Martínez / Cuartoscuro.com

Thousands of migrants will be sent back to dangerous conditions under these harmful policies.

The Trump administration is methodically dismantling the U.S. asylum system to slash immigration to the U.S. One of the most devastating changes the administration has introduced is negotiating agreements with Central American countries to require asylum seekers traveling through a country to first seek protection there.

The agreements would effectively make it impossible for migrants to seek safety at the U.S. southern border – and endanger the lives of thousands of people fleeing violence and poverty in the Northern Triangle (El Salvador, Honduras, and Guatemala) region and other countries.

The administration issued an interim final rule to implement the agreements with Guatemala, Honduras and El Salvador in late November. This means that the U.S. will begin to deport asylum seekers to these countries.

Here’s what you need to know:

What is a “safe third country” agreement?

This is an agreement between two countries to better manage the flow of refugee and asylum claims at their border. This agreement is signed under the premise that both countries can offer asylum to people in need.

The U.S. signed its first “safe third country” agreement with Canada. Essentially, if you pass through the U.S intending to seek asylum in Canada, or vice versa, you will be turned back because the U.S. and Canada are deemed safe enough for asylum seekers and equipped to process asylum and refugee claims in a fair manner.

How the Trump administration is using “safe third country” agreements

The safe third country agreement is not a treaty that requires congressional approval, and it can be signed and enacted unilaterally by the president. This has allowed the Trump administration to bypass Congress and the courts, impose further restrictions on asylum seekers, curb migration to the U.S., and pass the U.S.’ obligation to receive asylum seekers off to other countries.

Under the Trump administration, the Department of Homeland Security has pressured governments of countries in Central America into signingg agreements to stop migrants from traveling north to the U.S.- Mexico border.

Agreements with Honduras, Guatemala, and El Salvador require migrants intending to seek asylum in the U.S. to seek asylum in those countries first, adopting a core element of a safe third country agreement. In cases where the asylum seeker is already on U.S. soil, they will be deported to one of the three countries–but not their country of origin.

The agreements effectively block migrants from accessing the U.S. asylum system, forcing them to seek protection in countries that struggle with high rates of violence and poverty, lack institutions and infrastructure to assist large numbers of refugees, and grapple with severe sociopolitical, economic, and environmental issues. Moreover, many Honduran, El Salvadoran and Guatemalan nationals are fleeing these conditions in their own countries, also hoping to seek asylum in the U.S.

It’s telling that the Trump administration has not called these “safe third country” agreements–a shameful recognition that these countries do not meet the implicit requirements of a safe third country.

Although the U.S. has not signed an explicit agreement with Mexico, since January 2019, the Trump administration has enforced its “Remain in Mexico” policy. The policy forces Central Americans seeking asylum to return to Mexico–for an indefinite amount of time–while their claims are processed.

Under the policy, the U.S. has forced more than 50,000 migrants from varying parts of the world into the care of the under-equipped Mexican government, where almost none have access to legal help with their claims and are vulnerable to kidnapping, trafficking, theft, and other forms of violence. The “Remain in Mexico” policy is a clear violation of both U.S. and international law and is now being challenged in the courts.

The exact terms of these agreements with Guatemala, El Salvador, and Honduras are still unclear, and it is uncertain whether they will all be implemented in all countries. For example, even though the Guatemala government has signed an agreement, the Guatemala Supreme court has blocked it for now. Yet, in the fall of 2019, the U.S. government deported its first asylum seeker under this agreement to Guatemala–a Honduran.

If all these agreements are implemented, tens of thousands of asylum seekers traveling to the U.S. from the Northern Triangle will be stopped at the southern border of either Honduras, Guatemala, El Salvador, or Mexico. And people migrating from outside of the Northern Triangle will essentially have to apply for asylum from as far south as the Honduras-Nicaragua border.

These agreements strong arm countries into violating international agreements to protect and treat migrants with dignity.

The U.S. and other countries that are party to these agreements could be violating legal obligations under national and international law. That includes the U.S. Refugee Act of 1980 and U.N. Refugee Convention, which establishes the principle that refugees should not be forcibly returned to countries where they may be persecuted.

Advocates are now challenging these agreements in U.S. courts, which have the power to determine whether the Trump’s administration’s actions are lawful.

You can speak out against these harmful policies.

We must continue to demand that the U.S. welcome migrants with compassion and respect the rights and dignity of all people. Contact Congress today. Urge your members to do all they can to stand with refugees and protect asylum seekers.