The Dark Inevitability Of Zionism

Among the growing assaults on freedom of speech is an Israeli-driven campaign to criminalize a campaign to boycott Israel over its racist persecution of Palestinians, writes Lawrence Davidson.

We know where Zionism has taken Israel. The Balfour Declaration of 1917 led the way. In that imperial and colonial document, the British promised the World Zionist Organization a “Jewish National Home” in Palestine. They did so, as Edward Said put it, in “flat disregard of both the presence and wishes of the native majority residents in that territory.”

Right from the start the Zionists understood “national home” to mean an eventual Jewish state. Actualizing that assumption has had enormous implications not only for the Palestinians but also for the Jews. And, as it turns out, for the rest of us as well.

You cannot introduce one people, in this case a large number of Europeans who happen to be Jewish, into a territory populated by hundreds of thousands of non-Europeans, without negative consequences. And, if the incoming Europeans have the goal of creating a state exclusively for their group alone, those consequences are going to be dire indeed. Surrounded by “the other,” the only way you can achieve your exclusive state is through discriminatory practices and laws ultimately producing an apartheid nation. And that is what happened.

While this has meant, and continues to mean, segregation, ethnic cleansing and Bantustans for the Palestinians, for the Jews it means that their religion is tied to a racist political ideology. There is no instance of Israeli prejudice exercised against the Palestinians, no act of violence committed against them, that does not simultaneously dishonor and debase the Jewish religion and people. 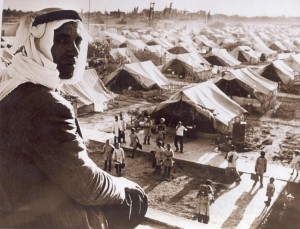 In 1948, some Palestinians, uprooted by Israel’s claims to their lands, relocated to the Jaramana Refugee Camp in Damascus, Syria

How about the rest of world? The consequences of Zionism are threatening both security and equality everywhere. Here is how this is happening:

—As the Balfour Declaration indicates, Israel and its society are products of a colonial era. That is an era when the people of both Europe and the U.S. openly practiced racist policies and behavior toward non-Europeans. They regularly trampled of the rights of alleged inferiors. Israel continues to operate in this fashion into the present.

—Following World War II, it became understood that these behaviors and attitudes are morally indefensible and their consequences should be remedied. And so, the United Nations was established, the Universal Declaration of Human Rights issued, and a number of treaties embodying international laws designating crimes against humanity were signed. With this process the world entered a potentially more civilized, post-colonial age.

—When this happened the Zionist project instantly became an anachronism. In fact, Israel became a state that defied the modern norm the moment it was proclaimed.

—However, Israel does not want to be outside the norm. It wants to be accepted as a “normal” nation, particularly within the Western state system. There are only two ways this can happen: either (1) Israel must either give up the racist ideology of Zionism and embrace a form of democracy accessible to all its people regardless of religion or ethnicity, or (2) the world must revert back to an acceptance of at least some of the colonial practices of the Nineteenth and early Twentieth centuries.

You would think that choosing the anti-racist option, and therefore seriously pressuring Israel – as the world had done with white-ruled South Africa – to fundamentally change, would be the obvious choice for today’s statesmen. But it seems not. Why is that?

There is now an ongoing effort, we might call it the updated Zionist project, to move the world backward so as to accept racist past practices as “normal.” It consists of (a) an attack on international law protecting human rights (despite the fact that much of this law was created as a reaction to the anti-Semitic crimes of World War II), (b) an attempt to undermine the International Criminal Court, and (c) an attack on the United Nations and its efforts to protect the human and political rights of Palestinians.

It is clear that very few of the world’s governments are willing to confront Israel, even though it is an apartheid state existing in an era that claims to detest such racist regimes. This has a lot to do with the financial and special interest strength of Zionist supporters both Jewish and Christian, and the strategic use of such power to corrupt policymaking. This can be seen most plainly in the United States.

There are also Israel’s extensive high-tech and weapons-trading networks in Europe, Africa and South America that lead important political and economic institutions and individuals to support, or at least turn a blind eye to, the Zionist state. And then, of course, there are a growing number of states that themselves have plans to marginalize their own minorities.

Does this mean that there is no defense against the insidious effects of this reactionary regime – one which, according to its own past Prime Minister Ehud Barak, is “infected with fascism”? No, there are options to oppose Israel. However, at present they are to be found outside of the realm of government action and, at least for the moment, outside occupied Palestine as well.

The latter is so because inside Palestine, 70 years of Israeli colonial savagery has worn down much of the indigenous population. This does not mean that resistance from within the Occupied Territories does not continue. It does, but at relatively low levels and at a high cost.

Since the death of Yasser Arafat in 2004, too many of the Palestinian leaders have been co-opted into playing the role of modern-day Quislings. The Palestinians within Israeli-controlled territory are now fragmented into Bantustan-style enclaves, and their own “security forces” often work hand-in-hand with the Israeli oppressors.

As a consequence of these circumstances, right now the greatest pressure can be put on apartheid Israel through the activities of organized civil society. This pressure by itself may or may not be able to force fundamental change on Israel, but it can certainly raise the cost of its racist behavior and impact public opinion.

Here we are talking about the BDS (Boycott, Divestment and Sanctions) movement that urges both individuals and organizations (be they economic, cultural or intellectual) to avoid interacting with Israel and its state-sponsored institutions and projects. To date this has proved to be an effective weapon against Israeli racism and colonialism. For instance, if you go to the website of the U.S. Campaign for Palestinian Rights, you can find a list of 200 recent victories falling within the Boycott and Divestment categories. State-based sanctions are still in the future.

Success in this regard has, of course, generated a fierce reaction from the Zionists. According to a Huffington Post article, “The Israeli government has reportedly committed tens of millions of dollars, one government ministry and its military and security intelligence assets to the fight.

Israeli Minister of Transport, Intelligence and Atomic Energy, Yisrael Katz, recently called for “targeted civil eliminations” of BDS leaders. Actually, such a reaction reflects not only the fact that the cost of Israeli racism is on the rise, but also that the Zionists have lost the public (if not the governmental) debate when it comes to their behavior toward the Palestinians.

Put broadly, BDS is an effort to help save the positive potential inherent in modern post-colonial society: the civilizing potential to be found in international law, in human and civil rights, in a benevolent and egalitarian rule of law for all of us.

So successful has BDS been to date, and so much potential does it have to help force Israel down the same road as white-ruled South Africa, that Israel and its surrogates in the U.S. and Europe are willing to undermine the very laws and rights that help uphold what freedoms there are within the public realm. For instance, in the U.S., the very right to engage in such a boycott is under Zionist attack, and by extension, so is the constitutional protection to free speech. American Zionists seem willing to subvert their own constitutional protections in order to support a racist foreign state.

Zionism can be seen as a strange twist on the Spanish philosopher George Santayana’s warning that “those who cannot remember the past are condemned to repeat it.” The Zionists certainly remember the persecutions suffered by European Jews. But they forget that this mistreatment was most often organized by racist states that sought to ethnically cleanse the Jews.

Having forgotten about this state-based aspect of their own past, the Zionist state now commits this same offense against the Palestinians. It also needs the rest of us to forget the sins of past racism if it is to carry on its effort to ethnically cleanse the Palestinians. Our response should be to embrace the motto, “Never Again!” It is time to direct this demand to the shameful behavior of Israel and the Zionists.