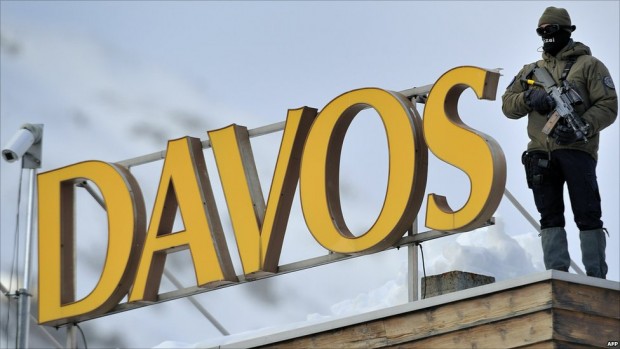 The Davos Oligarchs Should Fear The World They’ve Made

The billionaires and corporate oligarchs meeting in Davos this week are getting worried about inequality. It might be hard to stomach that the overlords of a system that has delivered the widest global economic gulf in human history should be handwringing about the consequences of their own actions.

But even the architects of the crisis-ridden international economic order are starting to see the dangers. It’s not just the maverick hedge-funder George Soros, who likes to describe himself as a class traitor. Paul Polman, Unilever chief executive, frets about the “capitalist threat to capitalism”. Christine Lagarde, the IMF managing director, fears capitalism might indeed carry Marx’s “seeds of its own destruction” and warns that something needs to be done.

The scale of the crisis has been laid out for them by the charity Oxfam. Just 80 individuals now have the same net wealth as 3.5 billion people – half the entire global population. Last year, the best-off 1% owned 48% of the world’s wealth, up from 44% five years ago. On current trends, the richest 1% will have pocketed more than the other 99% put together next year. The 0.1% have been doing even better, quadrupling their share of US income since the 1980s.

This is a wealth grab on a grotesque scale. For 30 years, under the rule of what Mark Carney, the Bank of England governor, calls “market fundamentalism”, inequality in income and wealth has ballooned, both between and within the large majority of countries. In Africa, the absolute number living on less than $2 a day has doubled since 1981 as the rollcall of billionaires has swelled.

In most of the world, labour’s share of national income has fallen continuously and wages have stagnated under this regime of privatisation, deregulation and low taxes on the rich. At the same time finance has sucked wealth from the public realm into the hands of a small minority, even as it has laid waste the rest of the economy. Now the evidence has piled up that not only is such appropriation of wealth a moral and social outrage, but it is fuelling social and climate conflict, wars, mass migration and political corruption, stunting health and life chances, increasing poverty, and widening gender and ethnic divides.

Escalating inequality has also been a crucial factor in the economic crisis of the past seven years, squeezing demand and fuelling the credit boom. We don’t just know that from the research of the French economist Thomas Piketty or the British authors of the social study The Spirit Level. After years of promoting Washington orthodoxy, even the western-dominated OECD and IMF argue that the widening income and wealth gap has been key to the slow growth of the past two neoliberal decades. The British economy would have been almost 10% larger if inequality hadn’t mushroomed. Now the richest are using austerity to help themselves to an even larger share of the cake.

The big exception to the tide of inequality in recent years has been Latin America. Progressive governments across the region turned their back on a disastrous economic model, took back resources from corporate control and slashed inequality. The numbers living on less than $2 a day have fallen from 108 million to 53 million in little over a decade. China, which also rejected much of the neoliberal catechism, has seen sharply rising inequality at home but also lifted more people out of poverty than the rest of the world combined, offsetting the growing global income gap.

These two cases underline that increasing inequality and poverty are very far from inevitable. They’re the result of political and economic decisions. The thinking person’s Davos oligarch realises that allowing things to carry on as they are is dangerous. So some want a more “inclusive capitalism” – including more progressive taxes – to save the system from itself.

But it certainly won’t come about as a result of Swiss mountain musings or anxious Guildhall lunches. Whatever the feelings of some corporate barons, vested corporate and elite interests – including the organisations they run and the political structures they have colonised – have shown they will fight even modest reforms tooth and nail. To get the idea, you only have to listen to the squeals of protest, including from some in his own party, at Ed Miliband’s plans to tax homes worth over £2m to fund the health service, or the demand from the one-time reformist Fabian Society that the Labour leader be more pro-business (for which read pro-corporate), or the wall of congressional resistance to Barack Obama’s mild redistributive taxation proposals.

Perhaps a section of the worried elite might be prepared to pay a bit more tax. What they won’t accept is any change in the balance of social power – which is why, in one country after another, they resist any attempt to strengthen trade unions, even though weaker unions have been a crucial factor in the rise of inequality in the industrialised world.

It’s only through a challenge to the entrenched interests that have dined off a dysfunctional economic order that the tide of inequality will be reversed. The anti-austerity Syriza party, favourite to win the Greek elections this weekend, is attempting to do just that – as the Latin American left has succeeded in doing over the past decade and a half. Even to get to that point demands stronger social and political movements to break down or bypass the blockage in a colonised political mainstream. Crocodile tears about inequality are a symptom of a fearful elite. But change will only come from unrelenting social pressure and political challenge.