The Day After Election Day

The view passed down from on high in the U.S. is that elections are the effective and legitimate means of collective decision-making in the realm of the political. Conversely, on matters of war and peace, economic distribution, environmental wellbeing, healthcare, education, housing, and social welfare— the areas where collective outcomes matter, these are either considered ‘economic’ in nature or elected representatives defer to markets, grant decision-making power to corporate pleaders, or act with unanimity across alleged ideological differences. In other words, the liberal conception of politics has remarkably little to do with collective decision-making.

This isn’t the tired complaint that there are no differences between political candidates. One can grant all the difference in the world. However, if elections aren’t where political decisions are made, their meaning and function are different than is popularly understood. That for the second election in a row two of the least favored politicians in American history represent the range of choices speaks to the vacuity of the ‘process.’ In the throes of electoral passion, the insistence has been that personality and tenor are substance, hence the promise ‘to restore dignity to the presidency’ is put forward as a ready substitute for adequate healthcare, meaningful employment at a living wage, environmental repair, and real political participation.

The American posture that elections create the political system has it perfectly backward. What better way to counterfeit the consent of the governed than through a system of choice controlled by establishment interests? By analogy, does the choice between two brands of corn chips define the range of food that can be eaten? Who it is that controls this process is demonstrated when the DNC mails ‘swag bags’ to rich donors as unemployment hovers above fifteen million people and millions more are expected to be made homeless in the coming weeks. And if this weren’t enough, healthcare lobbyists have already decided that Democratic campaign promises of a ‘public option’ go too far.

Graph: In the U.S., how much you earn determines how long you live. The difference between the life expectancies of rich and poor is ten full years. This difference is attributable to a range of factors including diet and occupational safety. But the largest factor by far is adequate healthcare. While this data only runs through 2015, subsequent data suggests that Obamacare made not one iota of difference in U.S. life expectancy. This distribution holds through 2019, more than long enough for Obamacare to have made a difference if it was going to. Lest this point be lost, the present system is healthcare apartheid by class. Source: vox.com.

The dominant model used to explain American electoral politics is the liberal model that emerged following WWII, with elected representatives acting on behalf of various civil constituencies, and a separate and distinct private sector whose purview is commerce. The private sector lobbies the political sector for special rights and privileges for businesses, industries, and commerce in general. A Marxist model (of capitalism) has the state working with leading industrialists and financiers to promote joint state and commercial interests at home and abroad. The state acts as an extension of business interests, and business interests serve as the vanguard of the imperial project abroad. The latter fits the explanation of neoliberal trade deals provided by liberal politicians quite well. 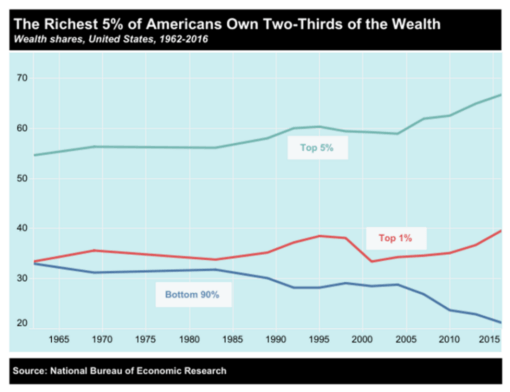 Graph: illustrated is the inverse relationship between concentrated and popular wealth. For six decades the rich have gotten richer, in relative terms, by making the poor, poorer. This has been accomplished through the destruction of organized labor, outsourcing and financialization, leading to unearned riches for the already wealthy and stagnating wages and wealth for everyone else. Of note: this trend is bipartisan, persisting through Republican and Democratic administrations alike. And this illustrates the point that the political decisions that matter aren’t on the ballot to be voted on. Source: inequality.org.

In the liberal model, workers, capitalists, and corporate executives work together for the benefit of specific corporations and the national interest. When corporations do well, workers share in the benefit (goes the theory). This is how elected representatives can claim to represent the interests of both capital and labor. In the Marxist model, elected representatives work with capitalists and corporate executives to suppress the power of labor. And they use state power to serve the narrow class interests of the rich. The New Deal organized and implemented the liberal model through the reclamation of state power to regulate capitalism. Neoliberalism reclaimed the Marxist model (of capitalism) where state and private power serve narrow class interests. 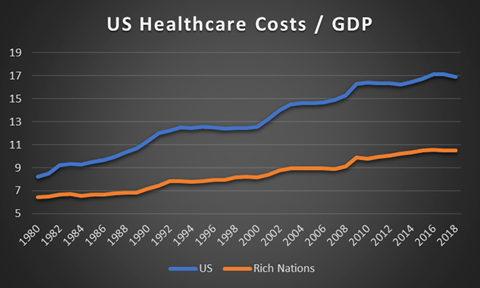 Graph: tying the graph of life expectancy ranked by income (above) with U.S. healthcare costs relative to other rich countries, the U.S. not only spends far more per capita on health care, but most of it goes to the wealthy and the PMC. And here too, there is little variation in the absolute and relative trends between Republican and Democratic administrations. Obamacare once again appears to have had no impact on either absolute or relative healthcare costs. Not only do the rich get most of the healthcare, but they also profit from the sick-care system that they control. Source: commonwealthfund.org.

This difference in political models explains how policies like bailouts for Wall Street and the ACA (Obamacare) can be interpreted so differently. In the liberal view, Wall Street serves a systemic function, financing businesses and providing consumer credit so that ‘we’ have employment and can buy houses and cars. In the Marxist model, Wall Street is the finance arm of American imperialism, providing credit to finance and control capitalist interests domestically and abroad. Domestically, finance is predatory, e.g. private equity using public funds to purchase foreclosed houses at pennies on the dollar to rent back to former ‘owners,’ as well as controlling through using indebtedness to coerce conformance with the demands of capital.

In like fashion, since the early 2000s, the rich and the PMC have been turning for-profit sick care into a medical extortion scheme. Private equity funds have been buying up medical practices and healthcare infrastructure like ambulance companies. And they are using them to charge exorbitant fees to people who either accept their services or risk death. By heading off changes to the healthcare system, national politicians aren’t expressing a view about public healthcare. They are empowering the rich to extort healthcare rents from working people and the poor. Revisit the graph of life expectancy by income to see how this plays out in people’s lives.

When the novel coronavirus hit, the first instinct of the political class was to shovel trillions of dollars into financial markets, while creating a temporary economic bridge for working people. For the second time in a dozen years people were told that there’s no money for public programs like Medicare for All, but unlimited money for Wall Street. Lest this point be lost, asset prices are quasi-money for the rich. ‘Supporting’ asset prices is an indirect transfer of trillions of dollars to the rich by the political class. This supports the Marxist model of capitalism as state support for capital and the rich. ‘Lemon socialism’ is another relevant frame. In fact, for the last dozen years, the Wall Street bailouts were mischaracterized as socialist by right-wing hacks. 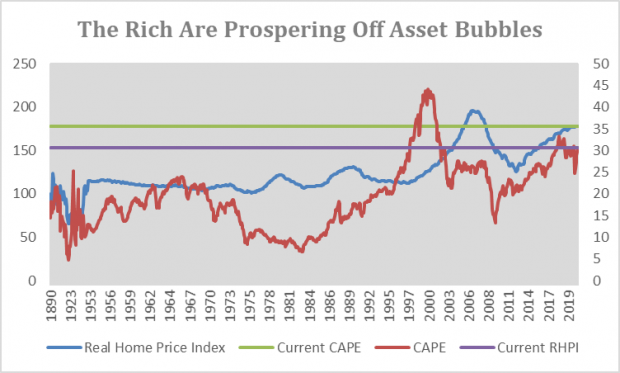 Graph: the great mystery of why stock and house prices are soaring while ‘the economy’ is in cardiac arrest might have something to do with announced and actual government asset purchases. While the precise nature of government interference in financial markets has been well debated, the promise of bottomless government support for ‘risk’ markets removes the risk from them. Given the narrow ownership of financial assets— the extraordinarily rich own most, the richest twenty percent own almost all, perpetual government bailouts are near-direct transfers from government coffers to brave capitalists fighting the good fight (not). Source: econ.yale.edu.

The facts of the liberal political model are known, sort of. The U.S. war against Iraq was about oil, as are perpetual CIA-NGO coup attempts in Venezuela, the U.S. proxy war in Syria, and the destruction of Libya. Oil = Profits for U.S. based multinationals. The U.S. engineered coup in Bolivia is about lithium for ‘green’ electrical storage. Financialization facilitates the transfer of real wealth— capital, real estate, stuff, to the people who own the financial assets whose prices are being levitated by the Federal Reserve and the U.S. Treasury. In addition to low quality, high priced healthcare, the U.S. has the most skewed distributions of income and wealth among rich countries.

The liberal political model of separate spheres of government and commerce is an ideologically motivated fabrication. To the economists, it isn’t a ‘mixed economy,’ and to the reformers, the problem isn’t ‘money in politics.’ The neoliberal ethos is private governance, the integration of private and state power for the benefit of capital and the rich. It ties back to electoral politics through the illusion that government is a distinct realm governed by and for the citizenry. Neoliberalism is governance by and for capital. And it has been the reigning, bi-partisan political ethos in the U.S. since the late 1940s, but particularly since the 1970s.

Governance by and for capital means that the owners and controllers of capital— the rich and corporate executives, determine political outcomes. Wars for profit, healthcare by and for the rich, housing owned by Wall Street, bailouts, patents, and trade agreements, aren’t what the people voted for. This isn’t because they necessarily wouldn’t. Or couldn’t be coerced into supporting. Would or wouldn’t have nothing to do with it. ‘Restoring dignity to the presidency’ is on the ballot. The issues that matter aren’t. The political class abhors racism but is fine with healthcare apartheid. The political class decries ‘inequality’ while it shovels trillions in gifts and bailouts to the rich while letting the lesser classes fend for themselves.

Dismayingly, the liberal political model is hegemonic in the sense that people who proclaim themselves to know better, ‘socialists,’ are almost universally prone to its wiles. As always, if it had descriptive value other than as ideology, it would be worth keeping on the shelf next to 1970s self-help literature and recipe books for preparing and eating roadkill. But alas, that whole slavery, genocide, three-centuries as the most militaristic nation in world history, consigning generations of poor people to living short, brutal, lives thing plucked the petal right off the rose. But as the man said, the philosophers have only interpreted the world, in various ways. The point, however, is to change it.

Rob Urie is an artist and political economist. His book Zen Economics is published by CounterPunch Books.