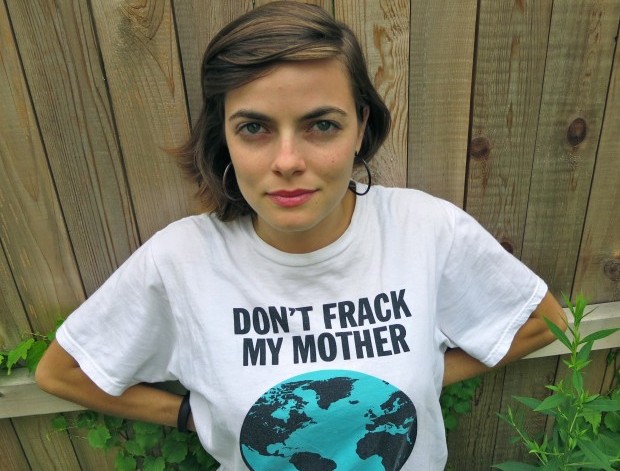 Why I Interrupted The Democratic Gubernatorial Debate

Above: Elizabeth Arnold interrupted the debate because none of all the candidates “have failed the leadership test” when it comes to fracking in Pennsylvania. (Photo source: Loudfastphilly.com)

I’m not particularly brave, I just feel that there is nothing anyone could do to me worse than what they are doing to our planet and to the families who can no longer live in their homes. When I rushed the stage I held up a list of 1700 families impacted by fracking. The List of the Harmed is compiled by Jenny Lysak and is now up to over 6,000 families. My printer stopped printing at 1700.

I actually hate the spotlight, but someone had to do it. I could not sit by and let this critical issue go unaddressed. About half way through the ‘debate’ I realized they were not even going to discuss fracking. I was sitting in the front row, very close to the stage steps. I had heard the candidates use the phrase “haven’t answered the tough questions” repeatedly and suddenly I just bolted on to stage without realizing the notes I had been scribbling were still in my left hand. I blanked on everything I was going to say and just winged it. Only later when watching the video did I hear what words actually came out of my mouth.There are many things I wish I had said, but hopefully my ‘inappropriate behavior’ creates some real discussion on a subject the candidates avoid like the plague, while we live the scourge.

The female moderator was beaming at me while the candidates just held fake smiles. But they are use to it. I’ve been bird-dogging them since November. They must have seen it coming. Security didn’t seem too threatened by me. One of the guards who hauled me out commended me saying “Great job.”

They weren’t sure what to do with me, but since I wouldn’t stop talking about children waking up with nose-bleeds, people passing out from the fumes while taking a shower, families being told not to light their stoves because their houses may explode, families living without water three years later — they just wanted me to leave before I depressed them further.

Then I walked out into the spring air and talked to supporters. I spoke with Craig Stevens, who also got thrown out for speaking up after they hauled me out.

Craig is a 6th generation landowner from Northeast PA. He is a lifelong conservative Tea Party Republican. He leased his land and has a pipeline running through his backyard. He now spends a lot of time visiting the offices of politicians all over the country to tell them how horrible fracking is and why we need to ban it.

He is considering voting Democrat for the first time in his life, because of our horrible Gov. Corbett. Unfortunately the Democrats are not much better on this issue. Everyone, of course, is better than Corbett.

“Hopefully my ‘inappropriate behavior’ creates some real discussion on a subject the candidates avoid like the plague.”

I have seen the anti-fracking movement grow exponentially in Pennsylvania over the past four years. Public opinion has become more anti-fracking in PA as people learn about the practice, and as more people are directly impacted by the death-cycle of fracking. Yet there has been little discussion in the media or in political offices about whether this practice should be permitted and how we can ensure Pennsylvanians are safe and prosperous.

If fracking could be done safely (which has yet to be proven), then we would need to insure that the state benefits, which it has not. When they first started fracking PA heavily back in 2007/2008, many thought it could be done safely if tightly regulated. The NE PA group ‘Responsible Drilling Alliance’ is now just ‘RDA’ and has dropped the underlying meaning, because they have decided there is no such thing as responsible drilling. We haven’t seen it anywhere in the country.

Fracking is more than just the drill pad. It requires noxious loud compressor stations, pipelines, water withdraw facilities, endless 24/7 truck traffic on roads still often used by horse and buggy, fracking waste dumped in the middle of the night (or in plain sight on the roads as ‘de-icer,’ which eats away at the underside of cars), mining the bluffs of the Mississippi for sand, workers developing silicosis, chemical production for the toxic frack fluid cocktail, injection wells to get rid of the millions of gallons of contaminated radioactive water that flowbacks with the gas when a well is fracked. And now they are trying to permit Liquid Natural Gas export facilities, which is a dangerous, harmful process that would allow all our gas to be shipped overseas.

We are not asking for much, just a chance for PA to protect our long-term economic and environmental health. No one should live without clean drinking water and a safe environment. No part of PA should be a for-profit sacrifice zone. It’s about time the well-being of all Pennsylvanians is addressed in public forums where candidates give clear and precise answers on how they will advance the common good. Don’t be shy about demanding action.

Elizabeth Arnold is an electrician by day and activist by night. She lives in Philadelphia and has been organizing with amazing activists from across PA since the Bush-era. Together they are organizing for the long haul. They are starting a campaign house in NE PA where youth can spend their summers learning and working in communities directly impacted by fracking.