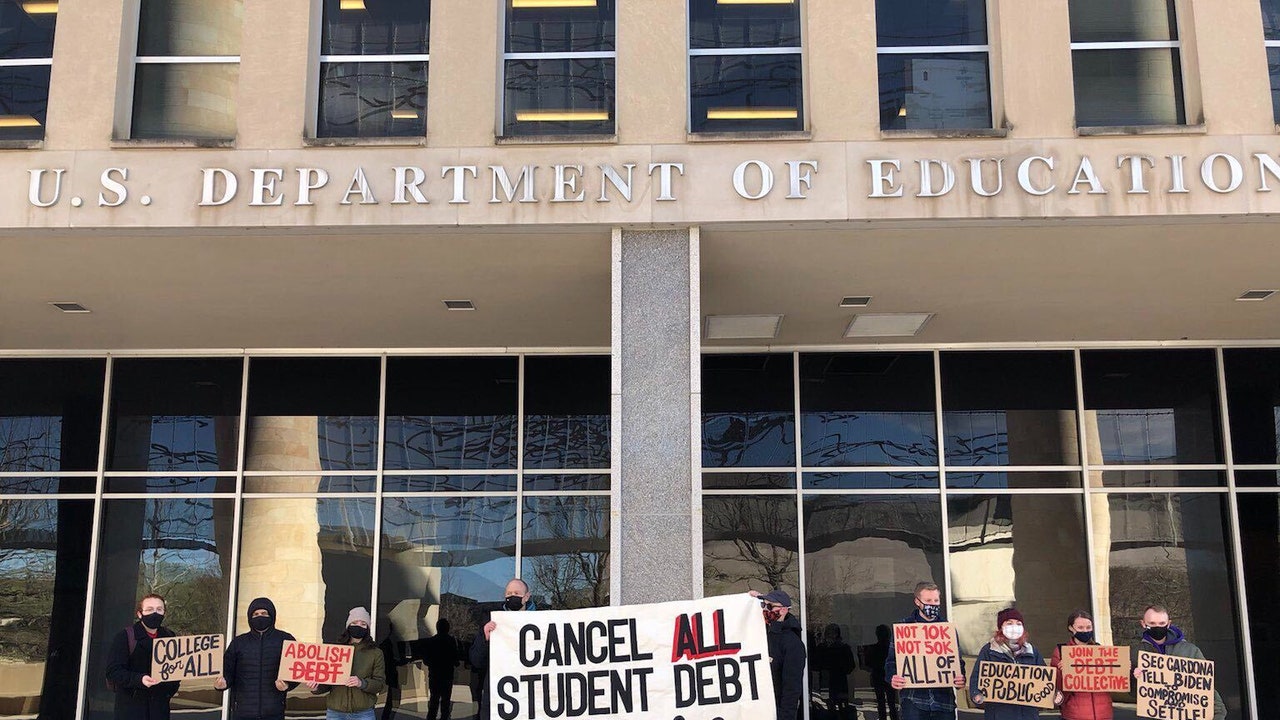 The fight to cancel student debt is coming to the president’s doorstep.

The Debt Collective is upping the ante in their fight for full federal student debt cancellation with their Pick Up the Pen, Joe! rally and day of action today in front of the U.S. Department of Education in Washington, DC. The event comes roughly a month before the pause on loan repayments is set to expire on May 1. Some White House sources have indicated the Biden administration may move that deadline again or forgive some amount of debt, but regardless, the Debt Collective’s focus remains squarely on eliminating federal student debt in full.

A broad coalition of more than 50 community organizations and labor unions from across the country are joining the Debt Collective in the nation’s capital to call on Biden to cancel all federal student debt through executive order.

“Student debtors are as diverse as the working class itself,” Debt Collective organizer and press secretary Braxton Brewington tells Teen Vogue. Though the movement’s detractors tend to paint the more than 43 million borrowers carrying $1.6 trillion in debt with a single brush, Brewington says Monday’s day of action is important because it shows people that student loan borrowers span every adult generation and occupy a wide range of industries. They are people who have multiple degrees as well as those who never completed college. Co-sponsoring organizations include the Working Families Party, Sunrise Movement, Democratic Socialists of America, American Federation of Teachers Local 2334, MORE (Movement of Rank-and-File Educators) United Federation of Teachers, and others.

“This is the largest showing of student debtors and other coalitions in a really long time,” says Brewington. “And it’s at a really unique moment where there’s a really strong urgency to cancel student debt and a precedent set by this two-year pause, along with record-high inflation [in recent history] and looming midterms. Costs are higher than they’ve ever been for millions of families and student debt [is] so high, in particular. This will be a really great opportunity for not only student debtors, but folks that haven’t always been leading the conversation about student debt — like teachers, nurses, labor unions, Black and brown Americans, and older Americans — to come together and talk about why this issue [is] so important for different constituencies.”

Brewington says the Debt Collective isn’t shy about taking up public space, noting the group’s roots in Occupy Wall Street. The coalition, stationed on the grassy lawn directly opposite the Department of Education building, will spend the day rallying around their demand for a debt jubilee by holding an event that embodies a jubilee’s sense of celebration. The choice to include music, dancing, and a sense of joy is also an attempt to fight the stigma around debt, says Brewington. Creating a communal space for debtors to come together and share their experiences with one another allows people to view their debt as a source of collective power instead of a source of individual shame.

The day also includes a debtors’ assembly, which is an open forum where participants are encouraged to share their stories and experiences around student debt. Brewington says fellow debtors supporting one another in public can be a deeply dignifying process that emboldens people to think differently about their debt and “shift the framework of asking this question of who owes what to whom.”

Toward the end of the day, the collective will facilitate a debt burn and invite participants to write down something that represents their debt on a piece of paper — whether that’s their actual personal dollar amount, the average debt burden of a given community, or the national total of $1.6 trillion — and then light it on fire, together. Though symbolic, it nods to similarly poignant acts of defiance like draft-card burning at antiwar protests in opposition to the Vietnam War.

“A piece of paper with a number on it literally holds so much power over you to the degree [that] people are willing to sell their homes, they’re willing to not have kids, to not get married,” says Brewington. “Some [are] even willing to hurt themselves or take their own lives. The idea of burning something that has so much power over people — erasing that in an instant — I just think is super powerful. It makes a statement and it also really starts to shift how you mentally think about debt.”

The Debt Collective’s demand for federal student debt cancellation revolves around an executive order that the group argues would allow President Biden to cancel the full outstanding federal student debt burden in an instant. Legal experts are split on whether or not the order is within his legal authority, but grassroots advocates remain steadfast in their strategy that an executive order is the movement’s best chance to win.

“A lot of right-wing economists will hem and haw over how debt abolition works, but that only is when it comes to the 99%,” Brewington adds. “We know the 1% [and] corporations, they walk away from their debts all the time. Loans are forgiven in a moment. The debt burn symbolizes this is actually how quickly it can go away. This doesn’t require years of congressional legislation. This doesn’t require some lengthy, bureaucratic process. It can actually disappear.”