The Decade Of Transformation: Being In Balance With Nature

Above: Save Our Planet Save Our Future, Belgium, January 31, 2019. Photo: EuroNews/Twitter.

This is the fourth newsletter in our series on the 2020s as a decade of transformation See Remaking International Relations, Remaking the Economy for the People, and Remaking Healthcare. In addition to COVID-19 and the economic collapse, multiple crises are reaching a peak and the world is changing as a result. How the world changes will be determined in some part by our actions. This week, we look at what can be done to bring our societies into balance with nature.

Biologist Elisabet Sahtouris describes an alternative theory of evolution to Darwin’s “survival of the fittest” in her book, “Earthdance: Living Systems in Evolution.” Sahtouris finds that evolution is cyclical, a spiral instead of linear. She describes how when a new species arises, it upsets the ecological equilibrium as it comes into competition with other species over habitat. The task of that species in the adolescent phase of its evolution is to find its niche in a way that is cooperative with other species. If it fails, it goes extinct.

The human species is in its adolescent phase, and now it is time to recognize our mistakes and change our behaviors. Sahtouris writes:

“Like any adolescent who is suddenly aware of having created a very real life crisis, our species faces a choice — the choice between pursuing our dangerous course to disaster or stopping and trying to find mature solutions to our crises. This choice point is the brink of maturity — the point at which we must decide whether to continue our suicidal course or turn from it to responsible maturity. Are we going to continue our disastrously competitive economics, our ravaging conversion of our natural supply base into things, our pollution of basic soils, waters and atmosphere in the process? Or will we change the way we see life — our worldview, our self-image, our goals, and our behavior — in accord with our new knowledge of living nature in evolution?” 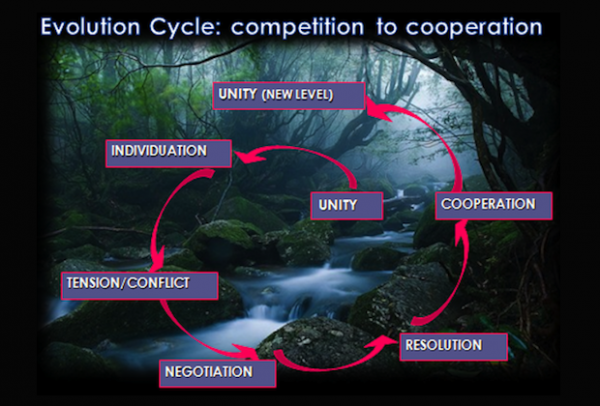 We’re in for a rough patch

The onset of the COVID-19 pandemic occurred quickly. The first documented cases occurred in Wuhan, China in late December. The first reported case outside of China occurred two weeks later in Thailand. At that point, it was also discovered that human-to-human transmission of the virus could occur. One week later, the first case of COVID-19 was identified in the United States. Within a month, 18 countries besides China had infections. By early March, there were 500 cases in the United States impacting 30 states plus the District of Columbia. And within another month, the number of cases in the US grew one thousand-fold to 500,000, with 20,000 deaths. These are only the ones we know about. It is certain that the number of cases in the US is being undercounted, perhaps by a factor of ten, as are deaths.

Within a matter of months, the pandemic has had wide-ranging and devastating impacts. There are nearly two million cases in 210 countries. Over 100,000 people have died. Health care systems are being overwhelmed. The pandemic triggered a global recession, which the world was on course to experience at some point soon, and this was before the economy started shutting down.

Nearly 17 million people in the US became unemployed in the last three weeks. This is also likely an underestimate as unemployment offices are overwhelmed. And a majority of workers in the fields of construction, manufacturing, and transportation, and in the service sectors are unable to meet their basic needs. Millions are losing their health insurance when they need it most.

As abruptly as the pandemic and global economic collapse have changed our lives, scientists predict another rapid disruption in our lives is on the horizon. A new study published in Nature predicts ecosystem collapse could start occurring within the next decade. Researchers found that many species are already living near the limits of the conditions they require to survive. As the planet heats up, many species will reach their limit simultaneously and there will be mass die-offs.

Bob Berwyn of Inside Climate News explains: “As global warming heats their habitat to the point that it is intolerable, many species have no place to go. Some will go extinct, with a domino effect that affects scores of other species. If it gets too hot for bumblebees, for example, it affects the reproduction of plants. If it gets too warm for insects and reptiles, it affects food supplies for birds and mammals.”

When ecosystems start collapsing abruptly, we will face similar situations as we are facing today with the twin COVID-19 pandemic and global recession. We will be forced to adapt to a new reality, but this time it will be a reality that threatens the food supply in addition to increasing the risk of disease. Just as health professionals warned us for years that we were unprepared for an inevitable pandemic, climate scientists are warning us of ecosystem collapse. We can mitigate the crisis, but that is only going to happen if we take the initiative to make it happen.

Before we start looking at solutions, we must understand the roots of the crises we face. It is by changing systems at the root level that we will bring about the transformation we need. Of course, this won’t be an in-depth examination. That is beyond the scope of a newsletter.

The COVID-19 pandemic has taught us that we are a connected global community. Diseases, greenhouse gases, and capital are not restricted by borders. What we do in one place, impacts another. To stop the pandemic, we must control the infection everywhere or there will always be a repository perpetuating it and putting any of us at risk. International cooperation and solidarity are required to make the transition we need.

The same is true with the climate crisis and the globalized neoliberal economy. They are connected to each other and to our health. It is the globalized neoliberal financial system that has driven the race to the bottom. Capital moves freely about the world in search of the cheapest labor and resources. Many governments, especially those in the global south, compete with each other to loosen regulations that protect workers and the environment to attract capital to their countries. Corporate trade agreements make transnational corporate profits more important than protecting the planet. Humans have created multiple environmental crises from polluting the Earth, as Robert J. Burrowes writes, turning it into a junk planet.

Capitalism knows no limits when it comes to profits. People are being displaced from their land as corporations gobble it up for mining, energy production or industrial agriculture. This forces people deeper into wild habitats where they come in contact with wildlife and also pushes wildlife into human communities. It increases the chances of transmission of disease.

As Keishia Taylor explains, “…human activity disrupts ecosystems and damages biodiversity, shaking loose viruses, which then need a new host.” As the barriers between humans and wildlife break down, the greater the risk for zoonoses, diseases that are transmitted from animals to humans. COVID-19 “is the sixth major epidemic in the last 26 years that originated in bats, mediated by a range of farmed, domesticated or hunted animals.” Factory farming is a great culprit driving these epidemics. Large numbers of animals live in crowded and unnatural environments, which weaken their immune systems and make disease transmission more likely.

Biodiversity is key to healthy ecosystems, writes Eric Roston in TIME. He adds, “Almost half of the new diseases that jumped from animals to humans… after 1940 can be traced to changes in land use, agriculture, or wildlife hunting. …There may be 10,000 mammalian viruses potentially dangerous to people.” The climate crisis is another threat to biodiversity as described above, for which governments are not responding.

Capitalism drives the exploitation of people and resources for profit without regard for the consequences. The burning of cheap, dirty fossil fuels for transportation required to connect disparate parts of the global supply chain as well as the oil and gas industry’s history of pushing dirty forms of transit drives greenhouse gas emissions along with large polluting industries and factory farms. Destruction of the land, including our forests, has lowered the capacity for natural carbon sequestration. This has led to the high levels of carbon in the atmosphere that cause climate chaos; record high temperatures are heating the oceans and storms, fires and droughts are causing more damage.

Vijay Prashad describes the many ways neoliberal capitalism has also driven privatization of state institutions, such as healthcare, and has created precarious livelihoods in his newsletter “We Won’t Go Back to Normal, Because Normal Was the Problem.” And that is our task: to make sure that out of these crises come major changes, the maturation of our species to cooperate with the ecosystems in which we live.

Life has changed drastically for many people as we are suddenly required to stay in our homes. Education has moved online. People are doing more of their own food preparation. Conferences and other large gatherings have been canceled, and some have moved online. We’ve had to change our habits quickly to “flatten the curve” of COVID-19 cases.

One positive side effect of our reduced activity is that greenhouse gas emissions have dropped significantly. Charles Komanoff and Christopher Ketcham of the Carbon Tax Institute estimate that the drop could be as much as 50% this year. They identify four positive lessons from the pandemic: greater reliance on science, the recognition that government action is required to confront crises, the knowledge that we can change our behavior quickly, and the necessity of social solidarity.

We can take rapid action to “flatten the curve” of greenhouse gas emissions just as we are for the COVID-19 pandemic.

Here is a list of ten basic steps we can take to reduce greenhouse gases and support the health of all living beings and the planet:

There are more steps we could add to this list that include socializing sectors of the economy so that human rights and protection of the planet supersede corporate profits, remaking trade along the same lines and strengthening localized, worker or community-owned enterprises.

We are truly at a crossroads. The pandemic has taught us to act in solidarity and that we can alter our lifestyles drastically when necessary. The climate crisis requires us to flatten the curve of our greenhouse gas emissions and toxic, polluting society. We can’t go back to normal because normal is killing us. The time is now to create a new world in balance with nature.