The Demise Of U.S. Hegemony: Analysis Of A Revolutionary Heat Wave In Haiti, West Papua, Mexico And Beyond

A Look At Recent Revolts In Haiti, West Papua, And Mexico And How They Are Linked To The Decline In US Imperial Power.

A massive revolutionary heat wave has swept the globe this summer, as militants have risen up with the intent to overthrow their colonial and imperialist foes. In the face of gruesome and relentless State repression, the people are nevertheless holding and gaining ground. From West Papua to Mexico, from Haiti to Colombia, from Honduras to Sudan and beyond, those who have long suffered the violence and indignities of occupation are declaring, unequivocally, that they have had enough.

These and other uprisings around the world herald the demise of U.S. hegemony.

On September 23rd, 2019, West Papuan revolutionaries burned down an Indonesian colonial government building in Wamena, as the insurrection in West Papua that began last month gained new momentum. In August, racist attacks against West Papuans in cities on the island of Java prompted widespread protests in the provinces, and roughly 2,000 West Papuan students studying in Java headed home early. Indonesia’s colonial occupation of West Papua and the racist violence stemming therefrom have propelled these protests into a full-on insurrection— and the Indonesian State has responded accordingly.

The State remains unable to suppress the revolution, despite many feverish attempts. At least 35,000 West Papuans have been forced from their homes, and an additional 6,000 Indonesian police and military personnel were deployed to West Papua earlier this month. Still, when police murdered sixteen West Papuans after students protested against racism, the people administered revolutionary justice in the form of flaming barricades and the torching of several buildings, including a government building and the airport.

In Mexico, on the fifth anniversary of the disappearance of 43 Normalista students from Ayotzinapa, militants attacked the national palace where President Andrés Manuel López Obrador currently lives, a Christopher Columbus statue, and other commercial and government buildings in Mexico City. The Normalista students disappeared on September 26th and 27th of 2014; last week, roughly 4,000 people, including students and anarchists, took part in enacting revolutionary justice against the State on their behalf.

Targeted offices included those of Secretariat of Welfare, the Superior Court of Justice of Mexico City, and the Ministry of Foreign Affairs, among other government agencies. In all, roughly thirty businesses and public offices were affected. 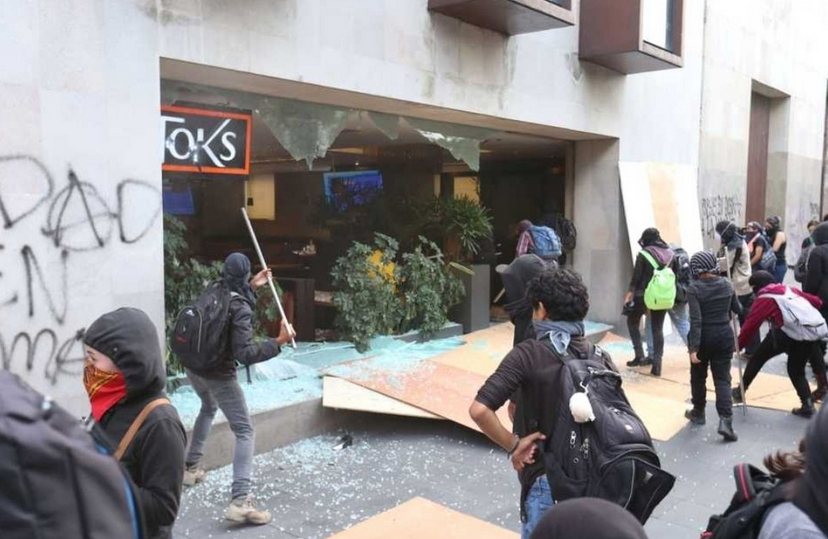 On Friday, September 27th, revolutionaries throughout Haiti destroyed police headquarters, attacked residences of government officials, and burned a jail and courts to the ground. Insurgents there are fighting to overthrow the corrupt right-wing regime of Jovenel Moise, who is backed by the U.S. Four people died in clashes in recent days, with many reports of injuries. Moise’s government had siphoned off Venezuelan aid money that came through Venezuela’s PetroCaribe program, which had allowed Haiti to buy petroleum products at discount and on credit. The program has now been suspended, owing to both the U.S.’s interest in overthrowing the current Venezuelan government in order to install a new far-right puppet regime and its support of the Haitian State.

Faced with devastating fuel shortages and prices, the people of Haiti have set the island ablaze. In the capital city of Port-au-Prince, police were met with armed resistance; in Jacmel, the central court and prison were burned to the ground, while prisoners arrested during the last round of uprisings earlier this summer were liberated. In Thomonde, revolutionaries disarmed the police, who fled as their vehicles and substation were set on fire. And in Les Cayes, the office of USAID NGO Caris Foundation was ransacked and their vehicle was set on fire. 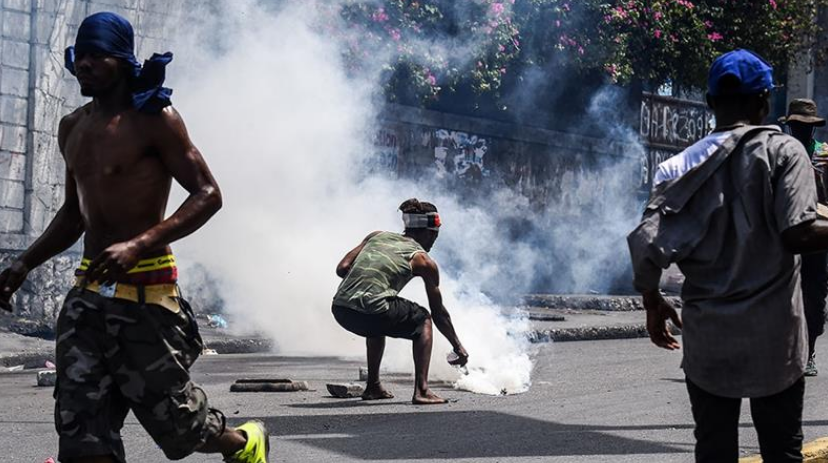 The Death Of U.S. Hegemony

While circumstances vary from one to another, these struggles are united in myriad ways. Not only are they all instances of anti-imperialist rebellion, but also among the sinister empires at the root of the oppression endured in West Papua, Mexico, and Haiti alike is none other than that of the United States.

In 1957, eight years after having recognized Indonesia’s independence, the Dutch empire began a process that would allegedly allow independence for West Papua in 1972. What the Dutch did not know at that time was that twenty-one years earlier, a 1936 expedition had discovered an ertsberg (ore mountain) on West Papua. While various territorial claims had been made, the mountain remained uninhabited for over twenty years.

Enter the twin demons of capitalism and imperialism.

The United States mining company Freeport-McMoRan Copper and Gold negotiated with Indonesian army general Suharto to allow prospecting on the mountain. In 1962, after Indonesia declared war on the Netherlands, the U.S. and U.N. predictably conspired to have “interim” control of West Papua signed over to Indonesia. The Indonesian State, having just over a dozen years earlier liberated itself from Dutch colonial rule, donned the colonizer’s clothes and viciously repressed the people of West Papua, making acts such as singing the West Papuan anthem and flying the West Papuan flag illegal.

General Suharto, no doubt thoroughly a U.S. stooge by this time, became president of Indonesia in 1968.

Similarly, the U.S. empire also colonized Haiti through both stooge deployment and theft of resources. In 2015, the U.S. successfully installed its Haitian stooge, Moise, by enabling former president Martelly— via his goons— to frighten and intimidate Haitians into voting for Moise (who Martelly also backed). In 2010, Canadian and U.S. mining companies unearthed gold, silver, copper, and other valuable metals— roughly $20,000,000,000 worth— in Haiti. This was just after the devastating earthquake that instantly killed up to 300,000 people and from which Haiti has yet to fully recover.

Roughly 15 percent of Haiti’s territory was under license to North American mining firms and partners as of December 2018, including the U.S. company VCS Mining, the Canadian company Majescor, and their subsidiaries. Predictably enough, as the people of Haiti struggle harder and harder to meet their most basic needs, North American colonizers continue to profit wildly from the island’s resources.

Hillary Clinton’s brother, Anthony Rodham, was a prominent player in the mining scheme, according to corporate VCS documents. (It should come as no surprise that Rodham has no background in mining whatsoever.) Rodham joined the advisory board of VCS Mining in October 2013, and a 2014 VCS memorandum touts his influential connections to the Clintons’ “inner circles” and “power bases.”

While President Obrador (AMLO) was fashioned in the style of a left-leaning crusader for justice during the most recent Mexican presidential elections, he has unwaveringly done Trump’s bidding since taking office. AMLO, who vowed not to do Trump’s “dirty work” with respect to abusing and oppressing migrants while on the campaign trail, has been deploying unprecedented levels of troops throughout Mexico, including his newly-formed and contentious Guardia Nacional (National Guard): an amalgamation of existing federal, military, and naval police.

In spite of ample promises made to respect the autonomy of indigenous people, AMLO created the National Institute of Indigenous Peoples to manage indigenous affairs— an obvious attempt to undermine organizations such as the National Indigenous Congress, an anti-capitalist indigenous resistance movement focused on defending land and resources and protecting indigenous culture. In April, AMLO announced a series of megaprojects he claimed would improve regional development: the Maya Train, a new refinery in Tabasco along the Gulf of Mexico, the Trans Isthmus corridor, and the Plan Integral Morelos— all of which involve dispossession of farmers and indigenous communities. In some cases, construction and management have already opened to bidding by transnational corporations, including many that are U.S.-based.

Trump personally sent a message to AMLO to assure the latter that the U.S. would invest in the Maya Train in particular. The area it will cover— approximately 1,500 kilometers, from Palenque to Cancún— is already overrun by big-box hotels, fine-dining restaurants and nightclubs which allow tourists from advanced capitalist societies to enjoy luxury on the cheap. By comparison, local economic benefits from this arrangement are minimal. Tourists are spared the sight of the wretchedly under-serviced neighborhoods outside of town that are home to the army of service, maintenance and construction workers whose starting salary ranges from $180 to $420 per month for a six-day week. One can imagine how far that goes in a city dominated by international tourism.

That this by-colonizers-for-colonizers railway invokes the name of the first indigenous people of Mexico pours salt on an ever-widening wound.

(It is fitting that so many harbingers of the end of the U.S. empire’s dominion should occur as we approach Indigenous People’s Day, October 7th— a day the State calls Columbus Day and that was meant to celebrate Columbus’s enslavement and murder of indigenous people, but is now being reclaimed by U.S.-based anti-imperialists as a day to commemorate indigenous martyrs and express solidarity with ongoing indigenous struggles unfolding across the globe.)

One remarkable thing about the present moment is that the three revolutionary uprisings explored above do not even amount to half of the total number taking place worldwide:

On September 20th and 21st, thousands of people in at least eight Egyptian cities took to the streets to demand the removal of President Abdel Fattah el-Sisi, a fascist who won both the 2014 and 2018 “elections” after running against no serious contenders and amid widespread voting boycotts.

Two days later, on September 23rd, students in Colombia rebelled in the capital city of Bogota and defended themselves in the face of violent repression by the police. This was the second clash between students and police there this year, and the third since current President Ivan Duque took office. (Under his regime, repression of student protests of any kind has become increasingly merciless.)

Three days later, on September 26th, roughly two thousand people demonstrated in Khartoum, Sudan to demand the immediate release of Waleed Abdelrahman Hassan, a Sudanese student who had been detained by Egyptian authorities and delivered a coerced confession on television.

Revolutionary anarchists stand in solidarity with all oppressed people, and recognize the potential contained in this moment. We mourn those who have already fallen in these struggles, but are buoyed by the knowledge that the Age of Empire is coming to a definitive end. The revolutionary heartbeat is palpable and thunderous, pulsing across oceans, deserts, mountains, and hills; igniting fortitude and resilience like wildfire. Neither individual State actors nor their imperial puppet-masters can put out the fire that burns in the chest of the People.

We welcome the imminent demise of U.S. hegemony, and support all of those who continue to fight for liberation!