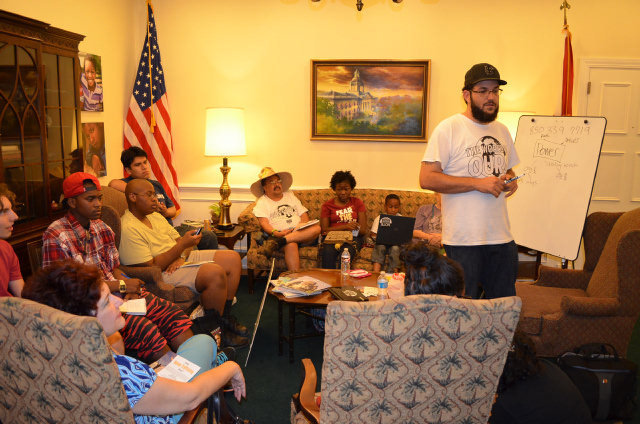 For four weeks now, the youth justice alliance called the Dream Defenders in Florida have peacefully held the state capitol building captive, pushing for reforms to laws that criminalize youth of color. Today, they unveiled “Trayvon’s Law,” a three-pronged bill that aims at the hearts of problematic policies the Defenders say allowed for neighborhood watch guard George Zimmerman to stalk and kill 17-year-old Trayvon Martin when he was innocently returning to his father’s fiancée’s house from the store.

Trayvon’s Law seeks to reverse state laws that allow people to shoot-and-kill first then claim self-defense later with impunity, that encourage racial profiling, and that excessively punish black and brown school students for trivial offenses. Many have argued that Trayvon Martin was racially profiled as a black youth by Zimmerman, who initially invoked “Stand Your Ground” self-defense laws after he shot and killed the teen. Martin was suspended from his school in Miami when he was murdered.

The Dream Defenders have scored a number of victories since initiating their #TakeoverFL sit-in. A number of celebrities and high-profile activists have camped with them, including actor/singer Harry Belafonte, civil rights leader Jesse Jackson, and today, rapper Talib Kweli. In their first week, they demanded a meeting with Florida Gov. Rick Scott, who at first balked, but then met with the youth leaders. They convinced Florida House Leader Will Weatherford to hold a legislative hearing on the state’s Stand Your Ground laws. Also, Dream Defender executive director Phillip Agnew convinced state Rep. Matt Gaetz to have a debate after the legislator said he doesn’t “support changing one damn comma” of Stand Your Ground legislation.

At the press conference featuring Talib Kweli, the rapper said that he was there supporting in his capacity “as a human being,” and not as a rapper or artist.

The Dream Defenders are “cherrypicking the best and what has worked from every movement,” before it, said Kweli. “They have taken the greatest lessons from Dr. King and the students from [the 1950s/60s civil rights organization Student Nonviolent Coordinating Committee] so it’s great to see students taking up the tradition of other students.”