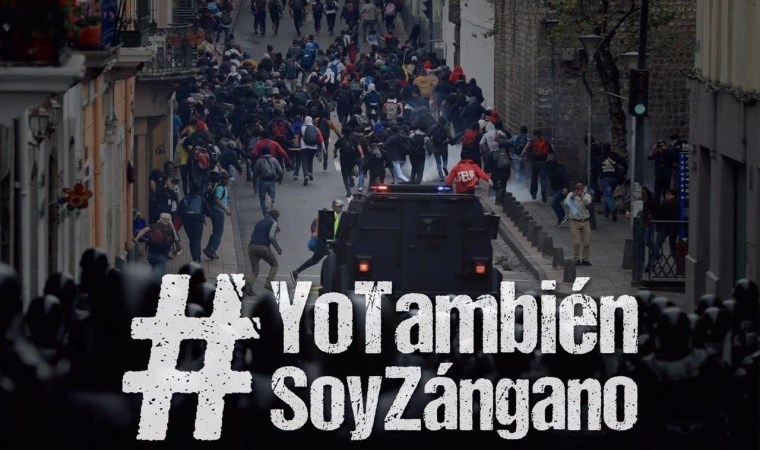 Ecuador’s workers are rising up against the IMF-mandated neoliberal economic reforms of President Lenin Moreno, a close ally of Washington who calls them “zánganos,” or drone bees.

With these words, uttered on October 4, Ecuador’s President Lenin Moreno proclaimed the end of a 40-year policy of fuel and petrol subsidies, which had traditionally benefited his country’s working-class population.

Zángano, the Spanish word for a male honey bee, otherwise known as a drone, is a slang term traditionally used by rich, elite parts of society to refer to workers and the poor, whom they denigrate as “mindless” or “uneducated.”

The use of the term by Moreno, a close ally of Washington, reflected the president’s resentful attitude toward ordinary Ecuadorians.

In short order, Moreno’s opponents transformed the slang into a buzzword . They began using it with pride about their movement, dubbing it, “la revolución de los zánganos,” or the revolution of the drones.

The bee has become a symbol of their revolt.

The decision to cut the government’s decades-old fuel subsidies was just one element in a package of neoliberal economic reforms presented by the Moreno government on October 1. The program was part of a bid to satisfy the demands of the International Monetary Fund (IMF).

This October, the reform package set off an explosion of mass protests across the nation.

The most controversial measure of all has been the elimination of the petrol subsidies that had been in place since the 1970s. This removal led to a staggering 123 percent rise in the price of diesel, with similar increases in the price of other fuels.

The package also introduced a 20 percent decrease in the salary of public employees, and initiated plans to privatize pensions and removed workplace security and job security safeguards.

Declaring a ‘state of emergency’

When he announced the wildly unpopular austerity package, President Lenin Moreno sensed that large protests against his government were inevitable.

So he declared a national “state of emergency,” and immediately deployed both the police and the military against protesters in the capital of Quito and other areas around the country.

The state of emergency has been widely condemned as unconstitutional. Leaders of the opposition have argued that it is a desperate measure to try to prevent the kind of mass-scale uprising that overthrew Ecuador’s neoliberal governments of Jamil Mahuad in 2000 and Lucio Gutiérez in 2005.

Various sectors of society have mobilized in response. Among the most visible political forces leading the demonstrations have been the Citizens’ Revolution Movement of Rafael Correa, Ecuador’s former leftist president.

They have been joined by a number of social and trade union organizations, such as the United Workers’ Front, the indigenous organization CONAIE, and the Popular Front political party.

The transport workers’ unions and the taxi drivers’ associations also announced strikes on October 3, bringing major cities including Quito and Cuenca to a halt.

Ecuador’s northern Pichincha province emerged as the epicenter of popular struggle. More than 10,000 people took part in the strike and the protests.

Although the transport workers suspended the strike on October 5, the demonstrations by other organizations, particularly the indigenous, have shown no signs of stopping.

Hundreds of Ecuadorians from the largely indigenous commmunity of Huaycopungo embarked on a long march to Quito in protest.

The community of Huaycopungo, from the province of Imbabura, are walking to Quito as part of the national strike against the measures taken by President Lenin Moreno. #ParoNacionalEcuador pic.twitter.com/W9LppVdG3i

The state security forces have responded viciously, violently cracking down on the protests.

Videos have circulated on social media showing unarmed demonstrators lying on the ground after being shot by police:

Another shocking viral video shows a police officer running over an incapacitated demonstrator with his motorcycle:

Social media has been full of examples of police brutality:

Police have even attacked journalists and videographers documenting the repression:

But the repression has not been able to quell the uprising.

In Quito, the protests were so massive that the police were forced to retreat:

Between October 2 and 6, more than 20 demonstrators were injured across the country, and more than 350 protesters were arrested.

In the city of Caymabe, the police reportedly shot protesters with live ammunition.

Ecuador: Armoured vehicle stationed around the corner launches tear gas in order to keep protesters away from the perimeter of the Carondelet Palace where government authorities meet. Shut ourselves in a shop now because the it’s become near impossible to breathe. pic.twitter.com/b5S6lI0Y1r

Moreno’s austerity program has only served to fan the flames of popular discontent that have been spreading across the country since Moreno took a decided turn to the right and implemented the IMF’s agenda.

Moreno has consistently attempted to discredit former President Rafael Correa’s popular economic strategy of combining social spending with public investment in infrastructure and energy projects while diversifying the economy, moving away from oil by developing a new system of production.

In contrast, Moreno’s government has pursued an IMF-mandated package of reforms that has mandated the dismissal of thousands of public-sector employees, reduced the size of the public sector, initiated privatization of parts of the public sector (particularly the public banking services), and slashed education and healthcare spending.

As a result, poverty and inequality have significantly increased over the past several years of Moreno’s’ rule.

Extreme poverty has also seen a rise from 8.4 percent to 9.5 percent during the same time period.

Moreover, the Gini coefficient, a measure of economic inequality, has increased from 0.462 in June 2017 to 0.478 in June 2019, demonstrating that Moreno’s policies of reducing social spending has principally benefited the rich.

While Moreno has proved himself a loyal steward of the IMF agenda, Ecuador has  witnessed a steady breakdown of constitutional law. Moreno’s repressive turn has manifested itself on numerous fronts, from his turning over of WikiLeaks publisher and political refugee Julian Assange to the British authorities to his persecution and imprisonment of the former Vice President Jorge Glas on dubious charges to his continuous political witch hunt against Correa and other leaders of the Citizens’ Revolution, such as the former Foreign Minister Ricardo Patiño and former assembly member Sofia Espin.

This all came as Moreno dismantled democratic structures at home, such as dismissing the newly elected Council of Citizens’ Participation and Social Control (CPCCS), and dismantled international structures of regional integration, like withdrawing from UNASUR and OPEC.

The Citizens’ Revolution Movement (MRC) has legally challenged Moreno’s declaration of national emergency, noting that it lacks any specific parameters regarding proportionality, legality, temporality, territoriality and rationality — all of which are mandated by the constitution.

Esther Cuesta, a member of the national assembly of the Citizens’ Revolution Movement, explained her party’s position regarding both the new rebellion and the growing authoritarianism and repression by the Moreno government:

“Millions of Ecuadorians, whom we join as the Citizen’s Revolution Movement, reject the neoliberal economic measures, dictated by the IMF and imposed to the Ecuadorian people by Moreno’s government, mainly because they will impoverish the vast majority of the population: the middle class, the working class and the poor, as well as small and medium-sized businesses, to the detriment of the future of children and younger generations.”

Cuesta further explained the significance of the zánganos movement in the historic context of the Ecuadorian people’s struggle against neoliberalism:

“Since the paquetazo announcement, what started as a transportation strike, emerged as a growing social protest all over the country and from different sectors of the population. Ecuadorian people have memory. The adjustment policies applied in the country the 1980s and 1990s provoked massive unemployment, impoverishing of the population, and about 12 percent of the population emigrated.”

For his part, former President Correa has cheered on the protest movement, tweeting, “Yo también soy zángano” — “I am also a drone.”