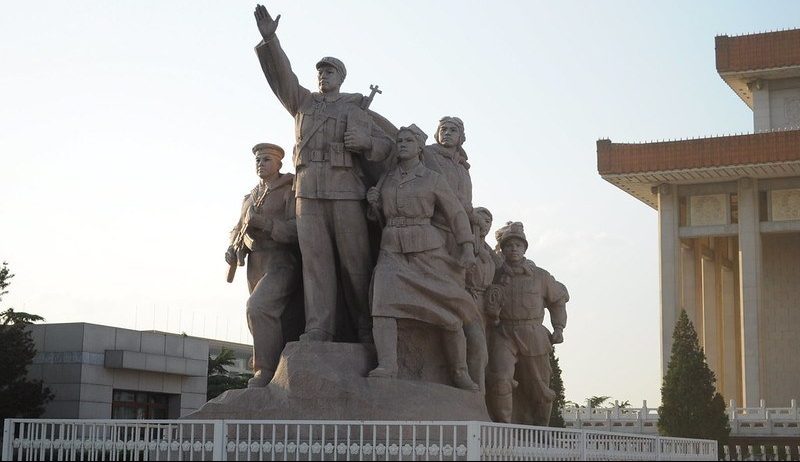 The East-Bound Wind Causes A Storm In The West

A few months after the publication of his remarkable book, Adam Smith in Beijing, I had an illuminating conversation with Giovanni Arrighi about the significance of China in world history. The late sociologist was interested in knowing more about the subject of my scholarship–modern Iran and the Iranian revolution. When he saw my puzzled face, he told me that he believes that all this apprehension in the West about Iran, is actually rooted in apprehension about China. Arrighi thought that if there were any “mainstream” of world history, it ought to be located in the story of China, the only civilization that has shaped the world as a hegemon over many millennia with the exception of the last 250 years.

The rise of the West, according to him is an aberration and China will define the future of world history. For China to play that role, it needs sources of energy to feed its expanding economy and a firm foothold in the world trade network. And there is Iran with its vast sources of oil and natural gas, located in a key strategic position guarding the flow of oil from the Strait of Hormuz and offering open access to the Indian Ocean trade routes.

I do not subscribe to the view that the U.S. position on Iran can be reduced to a reflection of the American political establishment’s attitude toward China. But there indeed are signs that Iran’s east-bound realignment toward China is making possible a major transformation in the world political and economic order.

The fear in the West of a rising China became more acute this week with the announcement of a memorandum of understanding (MOU) between Iran and China of a 25-year trade agreement. Although the text of the agreement has not been released, news outlets around the world were quick to sound the alarm of a pending major transformation of the balance of power in the Middle East and beyond.

Many observers have seen the move as a direct consequence of the Trump administration’s withdrawal from the Joint Comprehensive Plan of Action (JCPOA), also known as the Iran Nuclear Deal. The Trump administration miscalculated the vulnerability of the Iranian government to his regime of maximum pressure. Trump and his perpetually hawkish advisers believed that withdrawing from the nuclear deal, and re-imposing draconian sanctions against Iran, would compel the Islamic Republic either to surrender to the demands of its international foes or to face the wrath of its own sullen citizens whose livelihood the sanctions has directly threatened.

The latter did materialize last November, but it was met with a swift and brutal reaction by the Iranian security forces. The protests spread in many towns and cities around the country, but failed to sustain itself in the face of the state’s violent clampdown that left hundreds of protesters dead (according to the government’s own estimate 230 people were killed) and thousands arrested. In addition to the state repressive apparatus that contained the protests, Iranians also remain deeply inimical toward an American policy that invests in inflicting suffering on people in order to encourage them to rise up against their own government. Iranians are well-versed in this ploy, which offers a painful reminder of Saddam Hussein’s justification of bombing Iranian cities. In order to stop the bombings, Saddam shamelessly declared, Iranians need to topple their regime.

The U.S. pulled out of the JCPOA hoping that the American withdrawal will render the agreement practically null and void. The Trump administration reinstituted crippling sanctions against Iran and exerted pressure on the EU and the UK to follow suit. Although the Europeans voiced their displeasure with the U.S. policy, they could not deliver their share of the agreement under the mounting American pressures. This was a sobering moment for the Europeans as they witnessed the United States’ ability to impose its political will onto the European banks and corporations. By threatening to levy sanctions against European banks and corporations that invest in the Iranian economy, in effect, the U.S. undermined the sovereignty of the EU members over their own financial and economic affairs.

Whereas the Europeans saw in the U.S. regime of maximum pressure against Iran the limits of their autonomy, China saw an opportunity for the realization of its global development strategy, known as Belt and Road Initiative. The initiative that was adopted in 2013 envisions a massive expansion of trade networks by investing in infrastructures of land and sea transport that will eventually establish a seamless web of production, distribution, and consumption of goods: a silk road for the twenty-first century, as the Chinese promote the idea.

Iran figures in this strategy mightily, both in terms of the extension of the belt, i.e. roads and railway, and road, i.e. the sea routes, as well as the source of energy that the Chinese expansionist machine requires. Today China imports 10-million barrels of oil per day to fuel its economy. Theoretically, Iran can provide half of that need for the next two decades. If China’s plans to replace fossil fuel with renewable energy do not pan out, Iran will remain a major source to calm the Communist Party’s anxieties about the future of the silk road for the twenty-first century.

The details of the trade agreement have not been released and both China and Iran still need to ratify it. The early reports indicate that China has agreed to a $400-billion investment over the next 25 years in the Iranian oil, gas, and transportation infrastructure. The investment will be frontloaded for the first five years and will also include cooperation in military and intelligence and a strategic alliance between the two countries over the security of the Persian Gulf trade routes. The agreement was first conceived during the Chinese premier’s visit to Iran in 2016. In all likelihood, it is going to end the Trump administration’s gambit to cajole the Iranian side to capitulate and entertain a new nuclear treaty with the United States and its Western allies.

The Iran-China agreement, if signed and ratified, will leave the Iranian exilic opposition, those who banked on the American maximum pressures on the Islamic Republic to gain political points, in an untenable position. These critics, who were also joined by the U.S. State Department, have compared the proposed bilateral pact to the 1828 Treaty of Turkmenchay between Persia and tsarist Russia, under which the Persians ceded control of the vast territories in the South Caucasus that included today’s Armenia, Azerbaijan, Abkhazia, and Georgia. Ever since the mid-nineteenth century, in the Iranian political lexicon, “Turkmenchay” has remained a point of reference to the vilest encroachments on Iranian sovereignty.

In the past two centuries, these encroachments have always been mounted by the same Western powers who forewarn Iranians today of the colonial consequences of surrendering the country’s vast resources to the Chinese. No one knows whether this bilateral treaty would one-sidedly satisfy the Chinese imperial ambitions, a scenario that has played out in China’s appropriation of African port cities and mining towns. But one thing is clear that the objections of the U.S. and their Iranian supporters, whatever those objections might be, do not stem from their concerns for the protection of the Iranian sovereignty and Iranian peoples’ interests.