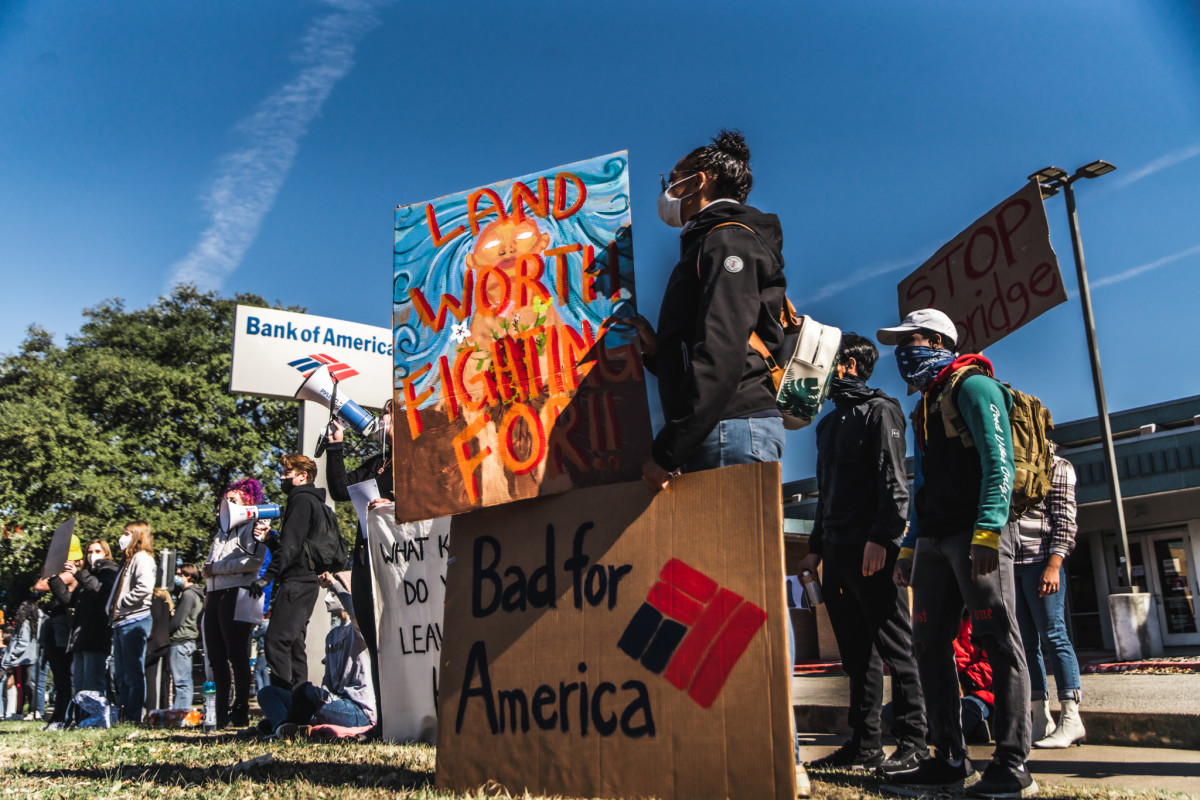 The Economics Of Climate Accountability

New report says greenhouse gas emissions continue unabated and the world is not prepared for a net-zero transition.

Last weekend some 400 Karankawa Kadla and their supporters organized protests across Texas to call attention to the expansion plans for an Enbridge oil terminal. It’s already the largest crude export terminal in North America potentially transporting as much as 1.5 million barrels of oil per day.

“The Enbridge terminal expansion is planned to be constructed in the ancestral settlement and land of the Karankawa Kadla, where thousands of sacred Karankawa artifacts remain and ceremony and prayer have continued for the past 2,000 years,” said a news release from the Indigenous Environmental Network. “If the expansion of the Enbridge terminal on Karankawa land continues, the Karankawa Kadla will lose direct access to their land and ancestral artifacts in addition to the pollution of sacred natural waters.”

The release also included a simple line asking for “accountability from Enbridge and Bank of America, one of the major funders of the expansion, for developing on Indigenous land without consent and the environmental destruction of the Gulf Coast.”

That word “accountability” shifts the protest to another kind of action, one based on ESG standards; a metric that includes Environment, Social and Governance as well as the planning for net-zero carbon emissions by 2050.

Both Bank of America and Enbridge say they have ESG plans and are on track to reach net-zero carbon emissions by 2050.

At a conference last year, Al Monaco, Enbridge’s president and chief executive officer, called ESG and sustainability the key to an energy transition. “Essentially, this is society’s dual challenge,” he said. “One the one hand, it’s clear that population growth, urbanization and a growing middle class will drive energy demand higher. On the other hand . . . energy supplies need to be developed sustainably, and aligned with climate goals.”

This dual challenge, he said, will lead to “responsible” growth over the next three decades including achieving net-zero greenhouse gas emissions, reducing emissions from operations by 35 percent in eight years and increasing the diversity of its workforce in the next couple of years. That’s a lot of ambition. Enbridge says that existing infrastructure, such as pipelines, is a part of that plan.

So why expand an oil terminal now? How does it move the company forward on its promises of sustainability? And what about Bank of America?

Let’s zoom out and look at the big picture.

A new report by the global management and accounting company, McKinsey, outlines the economic challenges of getting to a net-zero economy.

“The net-zero equation remains unsolved: greenhouse gas emissions continue unabated and are not counterbalanced by removals, nor is the world prepared to complete the net-zero transition,” the report warns. “Indeed, even if all net-zero commitments and national climate pledges were fulfilled, research suggests that warming would not be held to 1.5°C above pre industrial levels, increasing the odds of initiating the most catastrophic impacts of climate change, including the risk of biotic feedback loops.”

McKinsey said getting to net zero requires significant changes. Significant is an understatement because the numbers are huge. McKinsey estimates that an investment need of $9.2 trillion per year on average, an annual increase of as much as $3.5 trillion from today. To put this increase in comparative terms, the $3.5 trillion is approximately equivalent, in 2020, to half of global corporate profits, one-quarter of total tax revenue, and 7 percent of household spending. An additional $1 trillion of today’s annual spend would, moreover, need to be reallocated from high-emissions to low-emissions assets.”

Hence the urgency of reducing existing energy investments that do not meet climate change goals.

And there is a difference of opinion here. Some companies, even those claiming an ESG or net-zero plan, say that reductions are necessary but will come down the road.

“Some pathways to net-zero emissions assume that the decline in emissions begins immediately and progresses gradually to 2050, with appropriate measures in place to manage disruptions and limit costs. Others assume that reduction of emissions begins later and progresses more quickly to achieve the same amount of cumulative emissions,” McKinsey reports. “The latter could involve significant and abrupt changes in policy, high carbon prices, and sudden changes to investment practices—along with greater socioeconomic effects and a larger-scale response. Making job transitions would be more challenging, and there could be greater risk of stranded assets.”

The energy companies that are betting on “later” for dramatic emission reductions could be putting at risk significant assets, stranded assets. Enbridge, for example, spent $3 billion on its acquisition of the Moda Midstream Terminal, nearly $10 billion on the line 3 project, and millions more on smaller projects, including a seaport near Houston.

What about Bank of America?

A report last year by the Rainforest Action Network said that “until the banks prove otherwise, the ‘net’ in ‘net zero’ leaves room for emissions targets that fall short of what the science demands, based on copious offsetting or absurd assumptions about future carbon-capture schemes, as well as the rights violations and fraud that often come hand in hand with offsetting and carbon markets.”

That reported Bank of America’s at number four for the “dirty dozen” banks that finance fossil fuel development.

“These ‘Dirty Dozen’ banks have very different policies regarding restriction and phase-out of coal, oil, and gas, but none are sufficient. Among the world’s largest banks, strong coal policies are rare, and even the strongest oil and gas policies are sorely lacking,” the Rainforest Action Network said.

Bank of America says it’s goal is “to rebalance our portfolios away from more carbon emission intensive fossil fuel extraction, power generation, transportation and other consumption … toward low-carbon business models.”

The bank says it’s committed to “industry-leading disclosures” on its environmental progress, including a metric called “emission intensity.” That metric is different from overall carbon emission reduction because it’s based on a connection with the larger economy. So if the economy grows, so can total emissions.

Of course all of this economic and investment framework misses another leverage point, consent from Indigenous communities.

The company outlines its Indigenous People’s Policy that includes a commitment “to pursuing sustainable relationships with Indigenous Nations and groups in proximity to where Enbridge conducts business.”

Yet there has been no communication with Indigenous groups in Texas.

The Indigenous Peoples of the Coastal Bend, the Karankawa Kadla Tribe of the Texas Gulf Coast, and Ingleside on the Bay Coastal Watch Association filed a lawsuit in August against the U.S. Army Corps of Engineers for its approval of permits for the Texas project.

“Members of the Indigenous Peoples and of the Karankawa Kadla tribe travel regularly to Ingleside on the Bay in San Patricio County, Texas to enjoy the natural beauty of the land and the ocean, to observe wildlife in the area, and to find spiritual joy and fulfillment through their connections to the land, water, wildlife, and their ancestors who lived in the area,” according to the lawsuit. “This undeveloped space between the Moda facility and Ingleside on the Bay is the only remaining undeveloped area in this part of the Bay. This undeveloped space represents the last remaining vestige of the landscape and ecosystems that once occupied the area.”

The dredging of the bay “will destroy the McGloin’s Bluff site and the surrounding area. The increase in ship traffic and the associated increase in noise, industrial activity, and pollution will destroy their ability to pray and find spiritual joy and fulfillment in observing their ancestral lands and waters.”

This leads to even more questions about ESG, and especially its connection to Indigenous communities. Enbridge and other companies’ Indigenous Peoples Policies support the United Nations Declaration on the Rights of Indigenous People. Yet that protocol explicitly calls for Free, Prior and Informed Consent on projects.

This is why many critics dismiss ESG as “greenwashing,” giving companies cover to continue business as usual. On the other hand, companies see the growing value of being favored as ESG-compliant. Last year more than $120 billion flowed from investors into sustainable projects (more than double from 2020) and a regulatory structure is being added. The U.S. Securities and Exchange Commission is nearing completion of guidelines for companies to disclose climate-related risks.

There are three climate tests ahead: Transparent. Sustainable. And accountable.