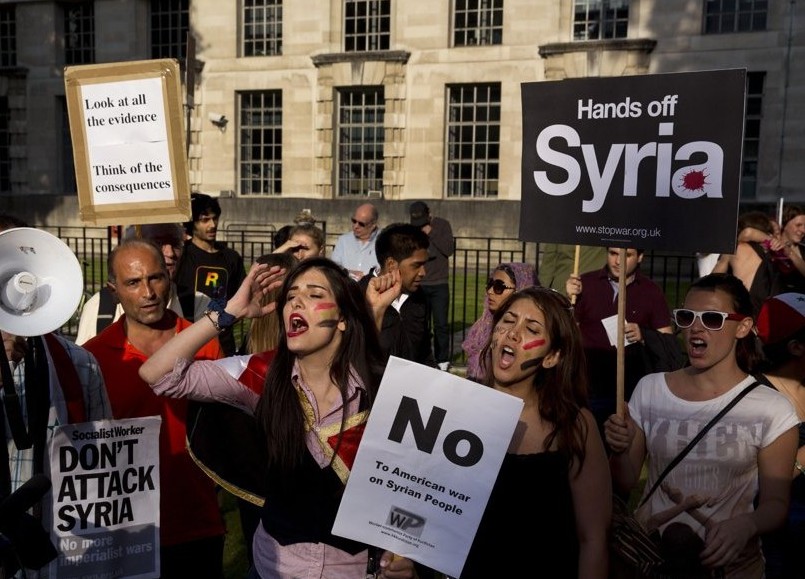 The Effective Path To Controlling Chemical Weapons Is Not War

The most effective deterrent against the use of chemical weapons is not the mass bombing of Syria, an action that would be illegal under international law and counterproductive, but to use the international legal system that has been built since World War I and take legal action under the Chemical Weapons Convention.

In his August 31st Statement on Syria, President Obama warned about of the “costs of doing nothing,” in response to the use of chemical weapons.  The president asked:

“What’s the purpose of the international system that we’ve built if a prohibition on the use of chemical weapons that has been agreed to by the governments of 98 percent of the world’s people and approved overwhelmingly by the Congress of the United States is not enforced?”

Just as President Obama has complied with the constitution by seeking a resolution from Congress authorizing the use of the military in Syria, he should also respect the rule of international law by abiding by the requirements of the chemical weapons ban and referring the matter to the International Criminal Court for investigation and prosecution.

A legal framework is in place to handle the prohibited use of chemical weapons.  The Chemical Weapons Convention provides for investigation of alleged violations by specialist bodies constituted by the Convention, as well as collective measures by states parties in response to activities prohibited by the Convention, recourse to the UN General Assembly and Security Council in cases of particular gravity, and referral of disputes to the International Court of Justice. These procedures cover not only the 189, countries that are signatories to the Convention but also countries like Syria that are not. The procedures of the Convention allow for the Executive Council of the Chemical Weapons Convention or the Conference of States Parties to convene a special meeting to consider the situation in Syria and recommend appropriate responses by states parties and the United Nations.

To operate within the law, the United States should provide the UN Security Council with the evidence it has regarding the use of chemical weapons by the Assad government.  Other members of the Security Council should do the same and these materials should be provided to the International Criminal Court.   This will allow the gaps in intelligence, alleged manipulation of intelligence, different information on who used the weapons and inconsistency between nations to be investigated.  We urge Russia, China or other members of the Security Council to propose a resolution referring the case to the International Criminal Court if the United States fails to do so.

If the United States proceeds with its plans to attack Syria over the alleged use of chemical weapons the U.S. will be violating, rather than supporting, international law; it will be acting in violation of the rule of law, rather than using the rule of law to enforce the chemical weapons ban.  As the Western States Legal Foundation said in a September 2013 briefing paper:

“There is no provision of international law, however, that allows ad hoc coalitions of countries to determine for themselves who they believe the guilty parties to be, and to punish them by acts of war against the territory of a sovereign state. The United Nations Charter allows unilateral military action only where a country is under attack or imminent threat of attack.”

The failure of the attorney general, White House counsel or  congressional committees to focus on the reality that a military attack on Syria is illegal shows the corruption of the rule of law in the United States.  The primary purpose of the UN is to “maintain international peace and security.” The UN makes it difficult to go to war as a country attacking another as the most serious crime a nation can commit. During the congressional hearings on the Syrian attack, not one senator or Member of Congress has asked Secretary Kerry, Secretary Hagel or General Dempsey how many civilians the United States is likely to kill in this illegal military attack.

The United States should become a signatory to the International Criminal Court, joining the 122 countries that have already signed the agreement. Perhaps U.S. leaders would consider the legality of their actions and the impact aerial bombing will have on the civilian population if they knew their actions would be reviewed by an independent tribunal and they would be held accountable.

To act within the rule of law to effectively deter the use of chemical weapons the following should occur:

1.       The U.S. should present its evidence regarding use of chemical weapons in Syria to the UN Security Council.

3.      It should expand the scope of the UN investigation to include the issue of responsibility for attacks, refer the Syrian situation to the International Criminal Court for further investigation and adjudication, and call for convening of a peace conference.

4.      If the Security Council remains unable to act, the General Assembly should assume responsibility under the Uniting for Peace procedure.

An attack by the United States on Syria would almost certainly result in many civilian casualties with great potential of a wider war and unpredictable consequences.  Aerial bombardment is a diffuse tool not narrowly targeted on stopping the alleged use of chemical weapons, but a blunt act of war that will cause widespread harm.  The United States government should not pursue this risky and illegal attack. Instead, it must pursue the legal, secure means of investigation and prosecution under the Chemical Weapons Convention.

Kevin Zeese serves as the Attorney General of the Green Shadow Cabinet of the United States and is an organizer of Popular Resistance.