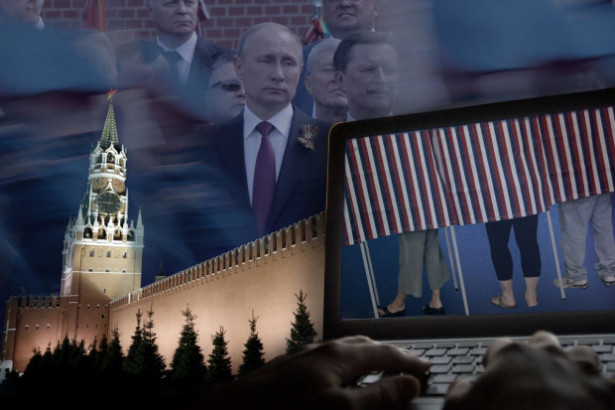 The Embarrassing Report On Russian Influence Over US Election

Note: As an example of the absurdity of the Director of National Intelligence report on Russia’s impact on US elections, from page 6 of the report on Russia influencing the 2016 US elections: “In an effort to highlight the alleged ‘lack of ‘democracy’ in the United States, RT broadcast, hosted, and advertised third party candidate debates and ran reporting supportive of the political agenda of these candidates. The RT hosts asserted that the US two-party system does not represent the views of at least one-third of the population and is a ‘sham’.” Those General Election debates of third party candidates were held in 2012. Now we know that one-third of the board members of the phony commission on presidential debates have resigned and the commission’s activities are being challenged as illegal. It seems like RT told more truth about presidential debates then the US commercial media. The report also cites the show “Breaking the Set” with host Abby Martin — even though it was no longer on RT for the 2016 election. One-third of the report, six pages of 18, were spent on discussing RT America. See “Assessing Russian Activities and Intentions in Recent US Elections”, Office of the Director of National Intelligence and the National Intelligence Council (2017).

The intelligence agencies report is weak broth yet the bi-partisans in Washington, DC and much of the corporate media (with exceptions as described in the article below) are singing a chorus of “Russia did it” with a solo by former presidential candidate, Sen. John McCain, refraining “it’s an act of war.” Perhaps the most accurate tweet on the report was along the lines of ‘The report on Russia is fake news seeking to undermine people’s confidence in US intelligence.’ Frankly, it is hard to understand why US intelligence agencies would put their names and logos on such a weak report. KZ

Intelligence Report On Russian Election Influence Is A Flop

Last week the U.S. Director of National Intelligence, the CIA, the NSA and the FBI released a report about alleged Russian hacking of the Democratic National Council and on Russian influence operation on the U.S. presidential election. The report failed to convince anyone. It is indeed a public relation disaster for the Intelligence Community.

John Harwood covers “the economy and national politics for CNBC and the New York Times.” More then 100,000 people follow him on Twitter. He is known as Hillary Clinton supporter and chummy with John Podesta who ran Clinton’s election campaign.

Harwood set up a simple poll. It is not statistically representative but gives a picture of a general sentiment. This result surely shows the limits of power of the so-called Intelligence Community. But it is worse: yesterday’s “Russian hacking” claims failed to convince even its most ardent and anti-Russian supporters.

Daily Beast: U.S. Spy Report Blames Putin for Hacks, But Doesn’t Back It Up

I cannot believe my eyes. Is this really part of the US government’s intelligence case?I’ll say it: the declassified USG report “Assessing Russian Activities and Intentions in Recent US Elections” is an embarrassment.

The unclassified report is underwhelming at best. There is essentially no new information for those who have been paying attention.

Lots of key judgements but not many key facts & no open proof in US Intell. report into alleged Russian hacking.

The intel report on Russia is little more than a collection of assertions. Understand protecting sources/methods, but it’s weak.

It’s hard to tell if the thinness of the #hacking report is because the proof is qualified, or because the proof doesn’t exist.@JeffreyGoldberg Have to say, though, I’m hearing from a lot of Russia watchers who are very skeptical of the report. None like Putin/Trump.

When you lost even Julia Ioffe on your anti-Russian issue …

Clapper as DNI and Brennan as CIA chief should have been fired years ago. They will both be gone by January 20. The Intelligence Community will remember them as the chief-authors of this devastating failure.