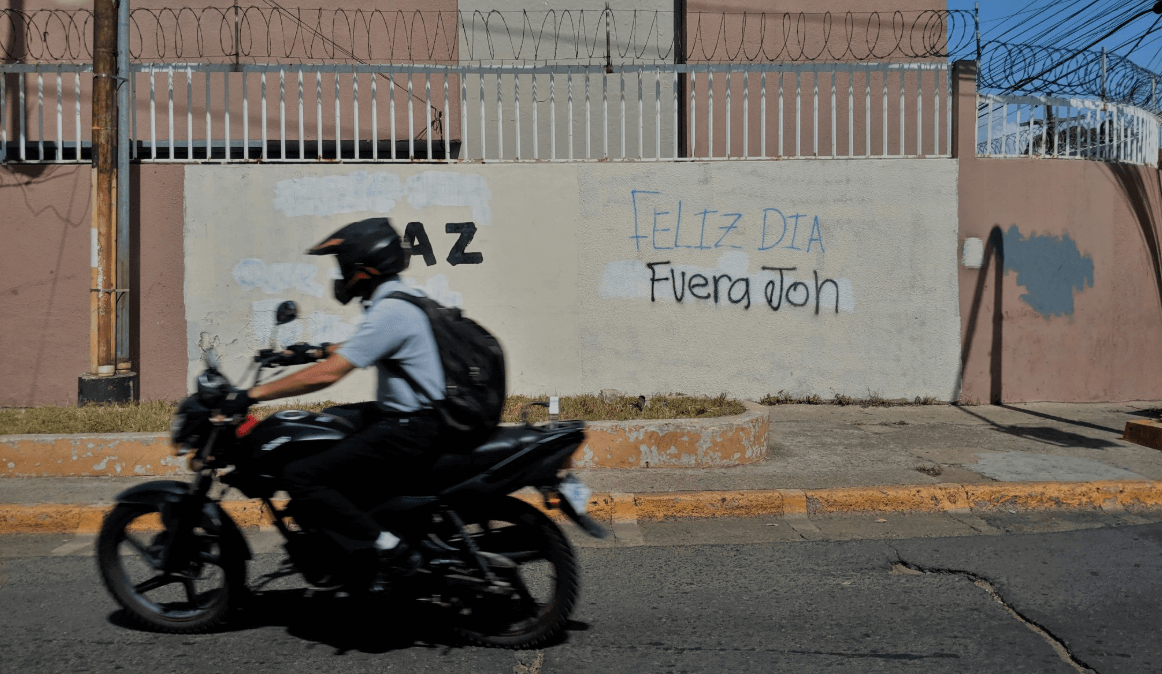 Honduras has been the epicenter of the Central American exodus and northward migration since the U.S.-backed coup 10 years ago and the ultra-violent repression by President Juan Orlando Hernandez’s regime, as well as its ultra-neoliberal policies.

TEGUCIGALPA, HONDURAS — Flanked by ministers and military and police leadership, Honduran President Juan Orlando Hernandez — embattled after being slapped with new drug trafficking allegations in the U.S. — held a press conference on the night of Saturday, August 3rd to declare his innocence. The accusations against him include funneling cocaine profits into his re-election campaign and shielding his brother and other drug kingpins from prosecution.

While Hernandez’s presidency is infamous for its categorical illegality under the constitution, his time in office has also seen Honduras turn into the hemisphere’s largest throughway for drugs. Meanwhile, the damage to society done by neoliberal austerity measures backed by the International Monetary Fund (IMF) and violent repression by police and death squads has brought about steady flows of migrants out of the country and to the southern border of the U.S.

But Juan Orlando’s enemies — he said on Saturday — are really just angry at the phenomenal success of his anti-drug policies and have made false charges against him. Among those complicit in this sinister attempt at revenge were his political rivals, former president Mel Zelaya (ousted in the U.S.-supported 2009 coup) and Salvador Nasralla. Nasralla, the candidate of the Opposition Alliance, was the rightful winner of the 2017 Honduran presidential election, but Juan Orlando Hernandez (JOH) was able to snatch it from him in a re-election for a second term that was unconstitutional in Honduras but backed nonetheless by the United States. Fraud by JOH’s National Party is also widely recognized.
In response to the accusations against him, JOH promised to crack down harder than ever before on organized crime:

I call on all good Hondurans…to join together…to continue in the struggle to recuperate our country as we have been doing…and finally finish off all these criminal organizations that have caused so much suffering and pain for the Honduran people. We continue to fully collaborate with national and international authorities…so that anyone who has broken the law will face justice…because no one is above the law.”

That Juan Orlando Hernandez and his brother Tony Hernandez — who flamboyantly branded his cocaine blocks with his initials “TH” — are drug traffickers comes as a surprise to exactly no one in Honduras. In a 47-page document filed in U.S. District Court on Friday, JOH is referred to simply as “CC [co-conspirator] 4.”

Signs that JOH’s time is running out are slowly beginning to reveal themselves. The release of the document comes on the heels of a request last week by the anti-corruption body, MACCIH — a government watchdog that receives significant U.S. support and funding — to the Honduran judiciary to seize the assets of individuals in JOH’s inner circle. Among them is Ana Rosalinda Garcia Carías, Hernandez’s wife, who is implicated in the theft of more than $1.7 million from government coffers in what is known here as the “Pandora Case.”

While the drug trade has transformed the nation’s financial sector into a giant washing machine for the crisp $20 bills preferred by traffickers, it would be an understatement to say that Hernandez’s illegal two-term presidency has been an unmitigated disaster for Hondurans.

Over the past two years, massive caravans of migrants have come together to brave routes designed by the U.S. to be dangerous and even deadly to cross, in order to curb successful migration. Migrants do so knowing that what they face on the other side may very well include concentration camps and separation from their loved ones because those odds still beat the ones they have staying home.

But while the media clings to the spectacle of the migrant caravans, they do not constitute a statistically significant increase in the crisis that has been raging since JOH took power in 2014.

Honduras has been the epicenter of the exodus since the U.S.-backed coup 10 years ago and the ultra-violent repression by JOH’s regime, as well as its ultra-neoliberal policies.

These factors — shocking in the scale of upheaval to Honduran society as they have been — have motivated Hondurans to flee towards a less certain misery, even with the possibility of dying on the way or in the custody of ICE.

Today, those conditions include:

Protests against the Hernandez dictatorship have been steadily increasing since the 2017 electoral crisis, during which over 40 Hondurans protesting the U.S.-supported fraud were killed by state security forces. In addition to lethal force, protests have been met with counterinsurgency and false-flag tactics, resulting in the imprisonment of protesters — including human rights activists Edwin Espinal, Raúl Álvarez, and Rommel Herrera, political prisoners detained in life-threatening conditions in a military-run, maximum-security prison modeled after U.S. detention facilities. Since April, healthcare workers, teachers and students have led near-daily mass mobilizations against IMF-driven privatization policies negotiated with Hernandez.

Honduran social movement led by Committee for the Freedom of Political Prisoners organizes a fast outside Public Prosecutor’s Office all next week, August 5 to 9th. The week ends with a concert demanding #FreePoliticalPrisonersHN #Honduras pic.twitter.com/35sczbwe9m

At the same time, Hernandez has refused to engage in honest dialogue with the opposition or acknowledge the legitimate demands of the Honduran people, instead doubling down on efforts to gut the public sector and ramping up militarization and repression.

In light of developments in the Pandora Case and his newly documented role as a co-conspirator, Hondurans hypothesize that the real power in the country — the U.S. Embassy — has finally withdrawn its support. The change in guard at the U.S. Embassy, with longtime Chargé d’Affaires and close JOH ally Heide Fulton being replaced by Lawrence J. Gumbiner, has reinforced these theories.

For Hondurans, these developments appear as harbingers of a changing tide, but also raise the question: Whose regime change will this be?

Leaders of the Platform for the Defense of Health and Education called Sunday night for local protests throughout the country at 6 a.m. on Monday morning, and for a single, national protest at the National Autonomous University of Honduras (UNAH) in Tegucigalpa on Tuesday, demanding the immediate resignation of the drug trafficker-in-chief.

Organizations across the country immediately followed up on the call to action, sending out communiques informing community members of meeting places for the Monday morning protests. These protests come on top of an already-planned week of action in support of political prisoners, including a hunger strike in which Mel Zelaya and Salvador Nasralla have committed to participate, along with many other prominent national figures and movement leaders.

I will be providing regular dispatches from Tegucigalpa throughout the week, as social movements increase pressure for Juan Orlando Hernandez to leave power and seek to take the reins of their country back from U.S.-backed drug traffickers and international financial institutions like the IMF.