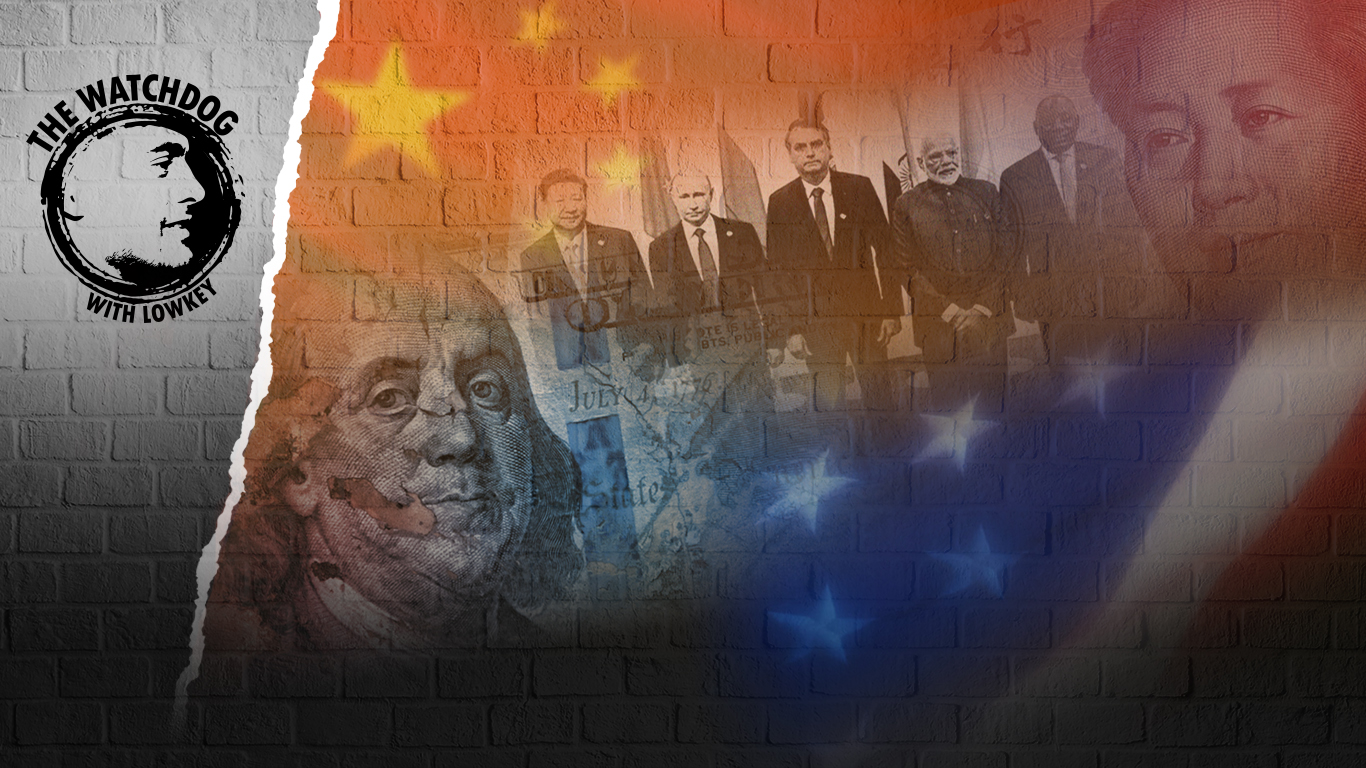 The End Of US Hegemony And The Rise Of BRICS

Everyone can see that the U.S. has been in decline for several years,” Ben Norton told Watchdog host Lowkey today, explaining that the days of a unipolar world where Washington dominates the planet are over.

Ben Norton is a journalist, writer, and filmmaker. He is the founder and editor of Multipolarista, a website dedicated to presenting international and geopolitical news through the lens of multipolarity. “Obviously this is going to be a decades-long process of decline,” he said of the United States, “But we are very clearly seeing alternatives emerging.”

In the past two decades, the U.S. grip on global power has been slipping, and new nations and organizations have begun to emerge that challenge American dominance. One of these is the BRICS, an economic and increasingly political bloc of emerging economies: Brazil, Russia, India, China and South Africa. Argentina, Iran and others have expressed an interest in joining this alliance, which has now laid out plans for its own bank and international currency, two moves strike at the heart of American economic hegemony.

“Now that the U.S. has sanctioned one-quarter of the global population, and especially now with the economic war on Russia, BRICS has emerged as this new economic infrastructure bringing countries together that want to get around Western sanctions,” Norton said.

Russia’s invasion of Ukraine has spurred the U.S. and its NATO allies to attempt to force poorer nations to turn their backs on Russia, politically and economically. And they have been trying to do the same in an effort to prevent China’s continued economic rise. But it has been to little avail, as even nations not known for defying orders have refused to line up behind the West.

For Norton, this is because these states see the writing on the wall: that U.S. economic and political power is waning and that the 21st century will be a multipolar one. As he explained:

Not only are countries around the world saying they want to continue doing business with China and Russia because they want Chinese technologies and goods and Russian commodities but they are also saying ‘look, we can do business with these countries and they don’t force us to privatize all of our state assets, they don’t force us to cut social spending and the minimum wage,’ [like the U.S. does]…Countries are saying that ‘we have done this neoliberal model for decades and it has resulted in disaster.’”

China is now the world’s manufacturing powerhouse, while Russia is a huge source of vital commodities such as oil and natural gas, food and fertilizer. The U.S., by contrast, has little to offer except missiles and Netflix. Yet through coups, sanctions and other forms of economic warfare, the U.S. has been able to dictate the economic path of the world.

“What the U.S. is doing is trying to prevent any alternatives to the neoliberal capitalist model,” Norton said. Washington retains a strong military edge, however. The worry is that if all it has is a hammer, it will see nails everywhere it goes.

Another region challenging the U.S.-run global order is Latin America, where we have seen a resurgence of left-wing anti-imperialist movements. Many of these have come to power already. Later on this year, however, Brazil is poised to elect Lula da Silva as president. If the largest and most populous country in the region re-elects an anti-imperialist socialist as its leader (as polls predict it will), it could be a significant and permanent blow against American power in the Western hemisphere, a region President Joe Biden calls “America’s front yard.”

If you are interested in trying to understand the big picture of how the world works and where it is going politically and economically, you do not want to miss this discussion.