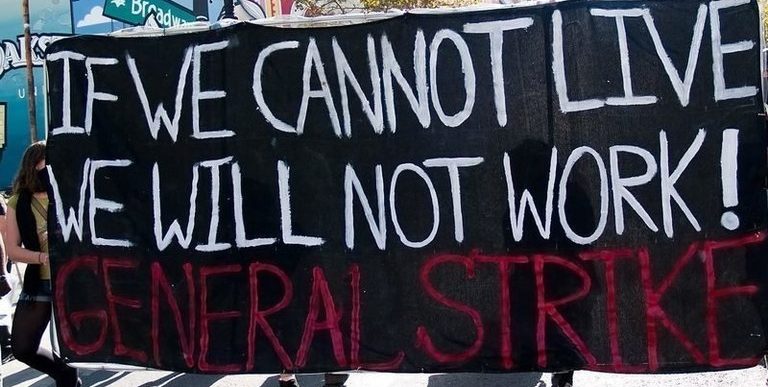 The Era Of Mass Strikes Begins On May 1, First Day Of General Strike Campaign

On Friday, May 1, an ongoing General Strike campaign begins. This campaign could become the most powerful movement in the United States and reset the national agenda. It comes when the failures of the US political system have been magnified by the COVID-19 pandemic, which triggered an economic collapse in a presidential election year.  The General Strike campaign will be ongoing with actions on the first of every month. Strategic strikes of workers, students, consumers, prisoners, and renters will also continue.

This new era of mass strikes builds on successful strikes by teachers, healthcare workers, hotel workers, and others.  According to the Bureau of Labor Statistics, in the last two years, there has been the largest number of major work stoppages in 35 years with more than 400,000 workers involved in strikes in both 2018 and 2019. This continues in 2020 with a wave of wildcat strikes.

People must commit to an ongoing campaign of strikes starting now and continuing after the election. FDR faced more than 1.4 million people striking after he was elected, which forced him to put the New Deal and workers’ rights legislation in place. The next president should be subjected to continuous strikes with specific demands. Striking is the most powerful tool of the people. We need to learn to use it effectively.

United action magnifies popular power and shows those in power that they cannot ignore us any longer. You can participate by sharing this article with other people and urging them to participate. Follow and share the hashtags #CoronaStrike, #GeneralStrike, #MayDay2020, #GeneralStrike2020, and #PeoplesStrike.

Participate in Popular Resistance’s Zoom call on April 29, 2020, at 7:00 pm Eastern/4:00 pm Pacific to learn about what will be happening on May Day and how you can be part of it. Register at bit.ly/MayDayMeeting.

COVID-19 exposes the fact that essential workers who provide food, healthcare, and deliveries to our homes are mistreated and underappreciated. Workers are underpaid and are not being provided with protective equipment or allowed sick leave. The COVID-19 rescue laws have given trillions in funding to investors and big businesses while leaving people and small businesses with crumbs. Twenty-six million people have filed for unemployment but states are not processing claims quickly and the COVID-19 rescue only provided an inadequate one-time $1,200 payment. Millions of the newly unemployed are losing their health insurance.

The #GeneralStrike has five demands:

We would add a sixth urgent demand – saving the postal service.

The tactics of the General Strike will vary over time. During this initial phase of the COVID-19 virus, there will be car caravans, sickouts, and signs on windows supporting the strikes. People will use social media to show support for the demands. On May 1 and beyond there will be webinars on the strike and the issues raised by it.

With a campaign of strategic and general strikes very likely going on until 2022, people can take control of the country and put the necessities of the people at the top of the agenda. Jane McAlevey points to three areas where workers have decisive power. These include logistics, healthcare, and education.

Recently, there have been wildcat strikes. These can include a variety of work stoppages, e.g. people taking sick days, work slowdowns, work disruptions due to flat tires on delivery trucks, and other ways that prevent work from being accomplished. To follow strike actions, visit On The Picket Line or check out this interactive map of strike actions, or the “Dual Power” map by Black Socialists in America. Get in the loop and get connected at General Strike 2020. 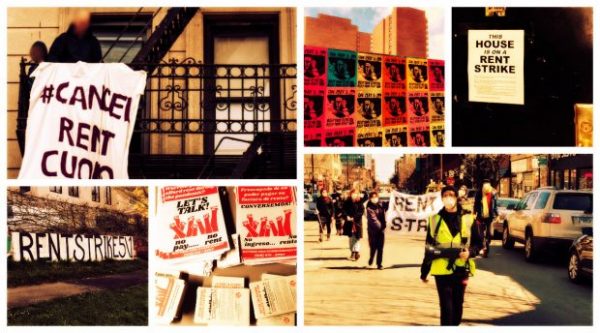 As unemployment reaches Depression-era levels, with one in six US workers being unemployed, and the government is unable to process unemployment benefits and is refusing to provide a basic income, people are unable to pay their rents. According to data from the Rentec Direct property management software platform, “The rent received by property managers in the U.S. by April 8 was 17% less than it was through the first eight days of March. Other data point to a similar trend. For example, data from the National Multifamily Housing Council found that 69 percent of renters paid their rent between April 1 and April 5, down from 82% in the same period in April 2019.” According to the New York Times, 40 percent of New York City tenants may have skipped their April payments.

In January before the pandemic, a Harvard University report found that nearly half of US renters are “cost-burdened,” meaning they spend more than 30 percent of their income on housing, a quarter of renters—eleven million people—are “severely cost-burdened,” spending more than half of their income to make rent. There was already a housing crisis in the US, the economic collapse has magnified it

This economic reality is turning into an organized and growing rent strike against corporate landlords. Calls for an expanded rent strike on May 1 are growing. In Kansas City, Missouri, tenant advocates tweeted: “Highway takeover in an hour. We will have tenants spanning the state, every five miles, from Kansas City to St. Louis.” Tenant groups from South Carolina to Los Angeles called for a rent strike in May as have groups in Chicago, Milwaukee, Philadelphia, Denver, Bloomington, St. Louis, and New York. Yesterday, Cancel the Rent car caravans were held in many cities. Rent strikes are building into a nationwide revolt with calls for rent strikes going viral in unlikely places like Georgia. How this will evolve? If tenants are made homeless, people will take over buildings to be housed, assets of landlords could be nationalized, and social housing could escalate.

Rent strike organizers say, “We are banding together: folks who cannot pay and those who will join them in solidarity. We refuse to pay for the right to live. Many will have to choose between rent and food, and many won’t have enough for either. We will not sacrifice our lives to keep the market afloat, or to fill the pockets of real estate lenders and landlords…Together, we can transform this moment of isolation into a moment of shared strength, support and compassion.” Rent strikes are demanding:

The COVID crisis has magnified a reality in US housing — housing has been turned in a profit engine for the super-rich. Rentals have been corporatized and controlled by some of the wealthiest individuals in the world. The Action Network reports: “Companies like Greystar, Equity Residential, and Lincoln Property Company control the rents for apartments in every state in the United States, while billionaires like Sam Zell founder and chairman of Equity Residential and Barry Sternlicht of Starwood Capital effectively serve as landlords for millions of us. These enormous companies dictate the rent and home prices in communities across the country. “

As a result, polling shows that a majority of people across the political spectrum support canceling rent payments and suspending home mortgage payments during the coronavirus pandemic. By a margin of 22 percent, voters strongly favor suspending or forgiving rents, for those under 45 years of age, the margin is 50 percent. 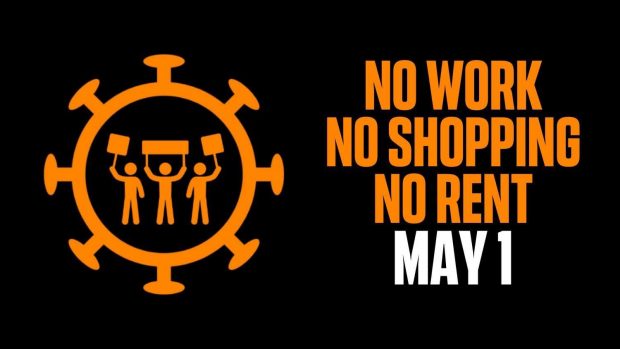 We do not yet have the organization to conduct a massive General Strike and only a few unions are aggressive enough to conduct strategic work stoppages. We must use the General Strike campaign to build our power and learn how to strike.

The foundation of all movements is education. We must constantly work to educate people about what is going on around them. This means overcoming the corporate media, which reports from the perspective of major corporate interests and the two Wall Street-funded parties. Independent media and social media are areas of activism that must always be a priority.

We are over halfway to raising what we need in our Spring Fundraiser. Donate now to support Popular Resistance as a media outlet and as an organizer of the General Strike. DONATE HERE.

We must organize to bring people into the movement. Mass movements win, fringe movements fail. How do you organize?  Organizing is as simple as talking to people who are not yet part of the movement, listening to their concerns, and showing them how joining together we can solve problems. This requires the patient and steady systematic building of relationships in the community. Talk to your neighbors, participate in apolitical neighborhood email groups, and speak with those who deliver to your home.

In the workplace, talk to co-workers, form clandestine strike committees, and speak and listen to each other. Work stoppages can vary in form. Workers can use the tactic of “Work to Rule,” following often ignored workplace safety and other rules, resulting in a slowdown. The bosses will fight back, so this will not be easy. Workers need to build community support so bosses are isolated and the conflict is broadened.

There are also tactics for at-home workers where sickouts and slowdowns are easy to adapt. Workers can call in sick during the first week in May. Even mild symptoms can result in a day or two off work. With the stress of COVID-19 and the economic collapse, a ‘mental health day’ is needed for many.

Then, we must mobilize people. When people are in the movement, a union, or an organization, they are ready to be mobilized in mass action. This requires showing this is a strategic campaign, not one protest, but a series of escalating events that build and are focused on achieving change. We discuss how you can create a strategic campaign in the free Popular Resistance School, How Social Transformation Occurs, eight web-based classes and readings we urge you to use.

If you are not part of a union or organization, become an active supporter of their actions. Show up, join them, call the media, religious leaders or neighbors, and urge them to show up.  If you see a picket line, join the workers or bring food and beverages. See yourself as the media and report on strikes, share their stories, and use your social media networks. If a union organizer is fired, come to the aid of that person including highlighting the injustice, insisting the person gets their job back, and raising funds to support them. We can support local strikers through “GoFundMe” pages or join a local Mutual Aid team.

In the coming era of strikes, we must remember that an injury to one is an injury to all. Show solidarity with the general strike. Wear red on Friday. Display a strike poster in your window. Wear a red or black or lavender bandana. Change your Facebook cover image.

As the era of strikes builds and people develop the skills, confidence, and courage to exercise their rights, the potential for transformational change will grow in ways that we cannot yet foresee. 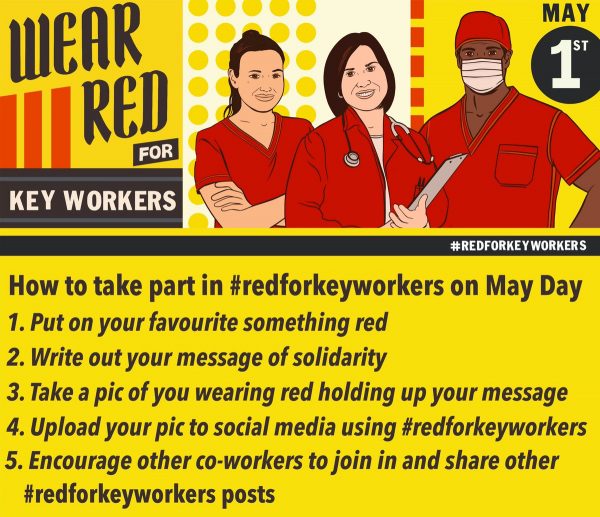